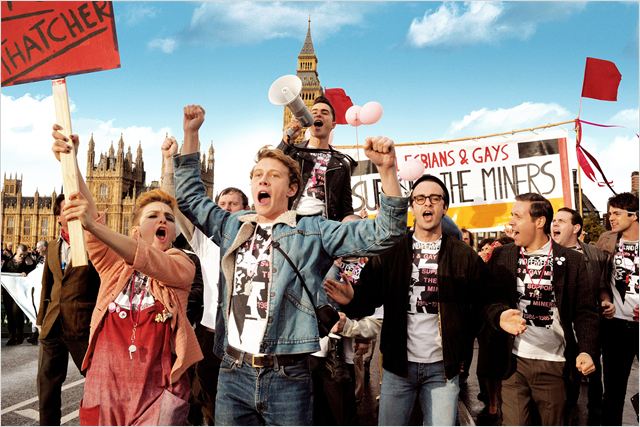 In 1984, pit towns across the country are coming under increasing pressure as the miners’ strike tightens its grip on communities that are already struggling.

A group of gay activists in London, led by a mouthy Mark (Ben Schnetzer), decides to offer support by collecting cash for some striking miners.

Meanwhile, an introverted teenager, Joe (George MacKay), is ready to start exploring his sexuality – without Mum and Dad finding out, of course.

On a secret trip up to London, Joe is recruited by Mark and his catchily-titled group, “Lesbians and Gays Support the Miners,” and soon finds himself signed up for a field trip to the south Wales mining community, which is being offered their collection.

But when they turn up, in their pink van, while the honourable community leaders (including Imelda Staunton and Bill Nighy) welcome them warmly and are delighted by the support, many of the more traditional locals are more suspicious of their guests.

On one level, it’s hard to deny that Pride is a thoroughly enjoyable and uplifting tale of the British working classes, following in the tradition of Billy Elliot, The Full Monty and Brassed Off – that peculiar brand of lightly comic, clean and colourful, grim social drama.

But while humour is often an effective way to examine the more serious side of life, the devastation of mining communities by the long-running strike and the struggle for gay rights just as HIV was entering public consciousness are hardly obvious ingredients for a comedy, so while you’ll often catch yourself laughing, if you stop to think about the wider situation, you might feel a little guilty about it.

Audiences will certainly be divided – probably as split as the people of south Wales – perhaps moreso, as many viewers might not sympathise with Arthur Scargill’s politics.

And this film comes from a particularly liberal – some might say lefty – place, telling its viewers that Margaret Thatcher’s evil government suppressed the working classes, killed already poverty-stricken mining communities and crushed the dreams and hopes of gay youths – while the good guys, including the miners and gay rights activists, are left to rescue their communities from the Tories.

It’s a shamefully simplistic view of early 1980s politics that cynically ticks boxes – including those that would qualify it for funding under the BFI’s new “three ticks” scheme – while being narratively naive and formulaic – each of the many characters in the inflated ensemble cast has their own story arc, such as coming to terms with their position and making amends with their friends and family.

Even if it weren’t based on real events – and events that actually did have genuinely historic implications, more for the gay community than for the miners – every plot point is signalled well in advance.

The determinedly feel-good Pride will play well in left-wing communities which share the politics of its central characters and its quirky British charm is likely to appeal to international audiences who enjoyed its cinematic predecessors, but its over-simplified politics and narrative naivety could frustrate viewers whose distance from the story could leave them feeling manipulated but its cynical box-ticking.