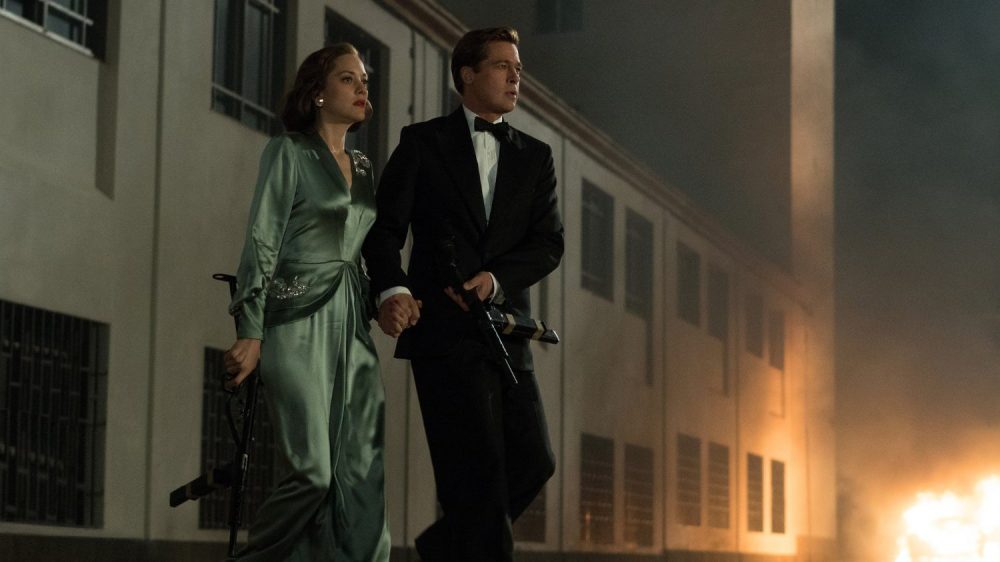 The Second World War is in full swing and Canadian airman Max Vatan (Brad Pitt), who’s posted with the RAF, is sent behind enemy lines in Morocco to assassinate the Nazi regime’s ambassador.

The powers that be have paired him up with a leading French spy, Marianne Beauséjour (Marion Cotillard), who’s been in place for a while, doing the ground-work to get them close enough to the target, as “man-and-wife.”

The line between their professional and personal relationship soon becomes blurred, and before long, the pair are living together in London, as a real man-and-wife.

But when he’s called in by his bosses and told that his wife is, in fact, a German spy, he’s torn between loyalty to his love loyalty to his country.

With two of the most bankable stars of the moment, in a period romantic suspense thriller, directed by the man behind such riveting films as Back to the Future and The Walk,  you might be forgiven for thinking this was a surefire hit.

In many senses, Allied hits the target – sumptuous period detail that will satisfy broader audiences more than wartime aficionados, confident turns from the two leads, each living up to the gravitas of Hollywood’s 1940s’ stars, slick action sequences and a gripping premise – but the devil is in the detail.

At round about two hours, it isn’t – and doesn’t feel – too long, but the pacing doesn’t fit; Robert Zemickis, whose experience should have told him to stick to the familiar story-telling structure, has gone all unconventional and more or less presents the audience with two distinct episodes – the first about two spies being brought together to carry out a mission and an entirely separate tale of an airman, who’s trying to find out whether his wife is an enemy agent before his bosses do. This isn’t, in itself, a cinematic crime, but more than forty five minutes into Allied, you still have no idea what the film is truly about. While every frame of the first episode is exquisite, there are simply too many exquisite frames, as it takes too long to get to the crux of the film, and even then, the unfolding of the central relationship feels oddly rushed.

For the second episode to work, the audience has to believe the love shared by the protagonists, so how you feel about the way it unfolds will depend on how convinced you are by episode one.

While it’s welcome – both for studios and audiences – to see one of the biggest stars of his generation carrying such a film, the casting is a little optimistic, with an American man in his fifties playing a Canadian war hero, who’d need the energy of a twenty-something to complete the tasks the allies expect of him; it’s not for nothing that some critics have likened Brad Pitt to one of his less conventional roles, Benjamin Button.

If you try not to think too deeply about what’s going on, on the first watch, this presents as a gripping thriller that carries you throughout, but a retrospective analysis of the plot will unravel it more quickly than a Nazi bomber plummets to the ground after a defensive ground-to-air strike.

While some of the important narrative details are satisfyingly convincing – such as the reasoning and ruthlessness of British intelligence and Brad Pitt’s determination to prove his wife’s innocence – some of the more fleeting moments are disappointingly jarring – an escape so incredulous that even the characters involved remark on how no-one is following them, a couple who know almost no-one hosting a packed party, the grandstanding of certain characters who are conveniently wherever the plot needs them to be at the precise moment that they need to be there, the world’s greatest spies failing to spot what’s going on right under their noses or a rather over-used “race-against-time” device.

There are also some greater narrative inconsistencies which feel a little frustrating, if not leaving you feeling duped. And while it’s entertaining to watch Pitt’s efforts to save his marriage, his odyssey becomes more implausible – and irresponsible – with each decision.

And as the film reaches its denouement, the audience is unlikely to predict the outcome until it’s approaching like a Nazi air raid. But oddly, this is perhaps not such a good thing, as once you realise where it’s going, the destination probably won’t be as clever or as interesting as modern-day cinema-goers might have guessed as the clues were revealed.