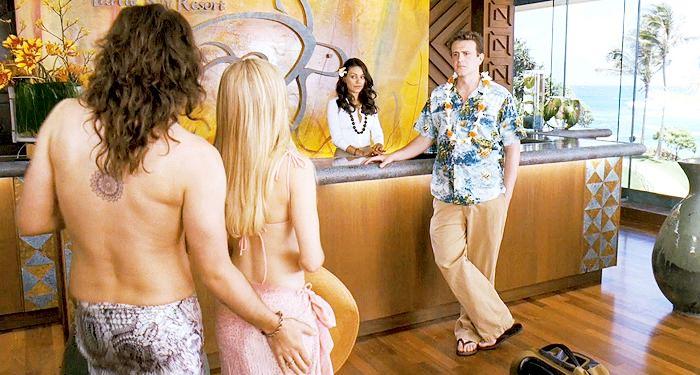 Hollywood composer Peter (Jason Segel) is devastated when his TV actress girlfriend Sarah (Kristen Bell) dumps him. On the advice of his best mate (Bill Hader), he takes himself to his favourite Hawaiian retreat for a few days to get over her.

Just his luck – of course – Sarah is sunning herself at the very same resort – with her new boyfriend, the British rock star Aldous Snow (Russell Brand).

The last thing Peter needs when he’s feeling lower than he’s ever felt is to have his celebrity ex-girlfriend rubbing her celebrity new boyfriend in his face.

The staff at the resort – including sexy receptionist Rachel (Mila Kunis), busboy Matthew (Jonah Hill) and surf instructor Chuck (Paul Rudd) – do their best to help him get over his strife, in the latest romantic comedy offering from the Apatow stable.

While not as sharp as last year’s sleeper hit Knocked Up, producer Judd Apatow’s latest romcom ticks all the boxes.

Packed with genuine laugh-out-loud moments, there’s a real story under the surface – formulaic as it might be.

From the nebbish loser in love to the vain celebrity ex-girlfriend, her narcissistic, hippy of a rock-star boyfriend, the super-sweet girl-next-door and the stoner surf-dude, this film has all the ingredients we’ve seen so many times before, but the performances make it feel fresh and fun.

Never having been a fan of Russell Brand, the most frustrating thing for me to report is that no matter how much I wanted to hate him, I couldn’t – he’s presumably just playing himself, but he does narcissism with such humility and charm that you can’t help but love pretty much everything our hero’s nemesis says and does. Quite how he can take this kind of performance on to another film role, though, I don’t know.

Like other films from the Apatow stable – bringing with it faces as familiar as many of the situations they find themselves in – it’s a warm tale, grounded in reality, with cheeky humour, and a moral heart, but it doesn’t quite have the wit or originality of some of his previous work.

It’s not big. It’s not all that clever. But it’s definitely heaps of fun.