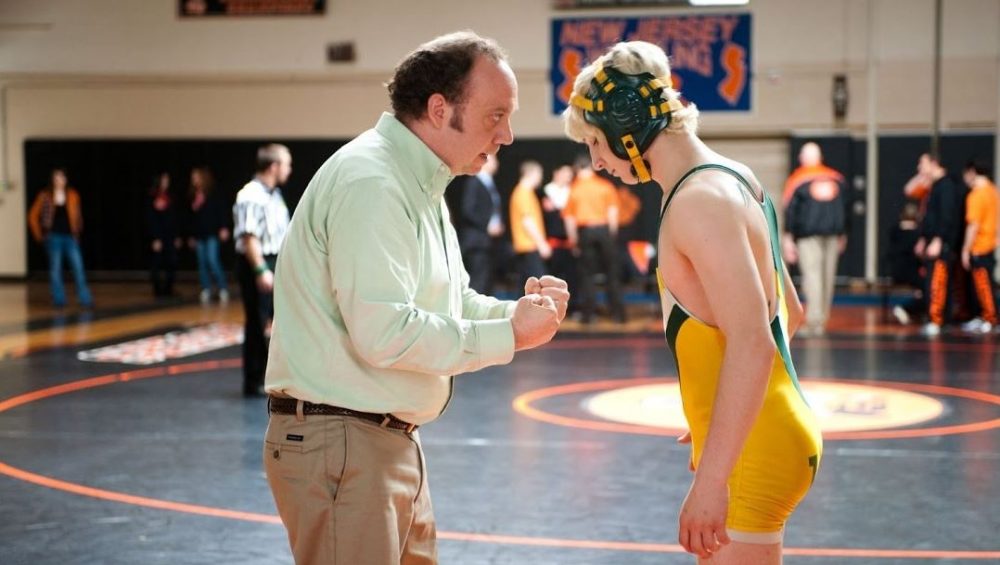 Lawyer Mike Flaherty (Paul Giamatti) runs his own firm, but business isn’t good. He’s a man with morals, but he’s growing desperate and in an elderly client, Leo (Burt Young), he sees an opportunity.

Leo is developing dementia and finding it harder to look after himself. Mike persuades a local court that he needs care. The judge authorises money from Leo’s estate to be used to pay for him to live in a residential home, but Mike decides to leave Leo in his own house and keeps the care money for himself.

He doesn’t ignore Leo – he treats him like his own father and gives him everything he needs. He’s just paying himself handsomely for it.

When Leo’s grandson Kyle (Alex Shaffer) turns up out of the blue, after running away from home, Mike and his wife Jackie (Amy Ryan) take him in and he becomes part of their family.

Kyle also turns out to be tremendously useful to Mike in his other role – the local school’s chief wrestling coach. Kyle’s input inspires a bunch of losers to become feared by rival schools and invigorates the lives of Mike’s fellow trainers, Stephen (Jeffrey Tambor) and Terry (Bobby Cannavale).

But when Kyle’s mother turns up to reclaim her son, the truth about Leo’s care comes out, threatening Mike’s livelihood – and the positive new lives he has built for himself and Kyle.

Tom McCarthy is an actor. Three times in his life, he has turned his attention to directing and each time he has produced a gem.

First, The Station Agent’s study of eccentric small-town American life as seen through the eyes of Peter Dinklage’s dwarf. Then, The Visitor earned a well deserved supporting-actor Oscar nomination for Richard Jenkins, as a man who fought for a muslim immigrant to be able to stay in New York. Now, he has another fine actor delivering a delightfully refined and complex performance as a morally-challenged, but at heart, good man with difficulties.

Paul Giamatti’s pain and frustration at his failing business is palpable and it’s not hard to see why he bends the system to his own advantage in the circumstances. Leo might not get the treatment that he’s paying for, but he doesn’t realise – and he’s happy anyway. In a heart-warming and empathetic turn, Alex Shaffer’s Kyle is enjoying his life for the first time in years, as he gives hope to the school wrestling team and all those involved in it for the first time in years.

Bobby Cannavale – who had a great supporting turn in The Station Agent – is back with one of the best characters to grace independent American cinema for some time – naïve and simple, competitive, supportive, warm and above all funny. He steals a throwaway line from Kyle and turns it into what should rightfully become one of the catch-phrases of the year.

The writing and performances can’t be faulted, as you’d expect from a Tom McCarthy project, but it falls down in the narrative stakes. While the dialogue sparks and the characters jump off the screen, the way the plot unfurls is rather convenient and contrived (how lucky that a runaway kid who turns up on the doorstep of a lawyer-cum-school-wrestling-coach just happens to be a former Greco Roman wrestling champ?!) and doesn’t feel as realistic as the characters deserve.

And with a title like “Win Win,” you might expect an indy movie to throw in an ironic curve ball, but ultimately, without giving the end away, a win-win situation is indeed what arises, jeopardising the conflict in the drama.

Win Win is a worthy addition to McCarthy’s filmography, but while it’s the most enjoyable of the three, it’s the least mature narratively and while it might chime with the lives of more viewers than its predecessors, it probably has less to teach us.