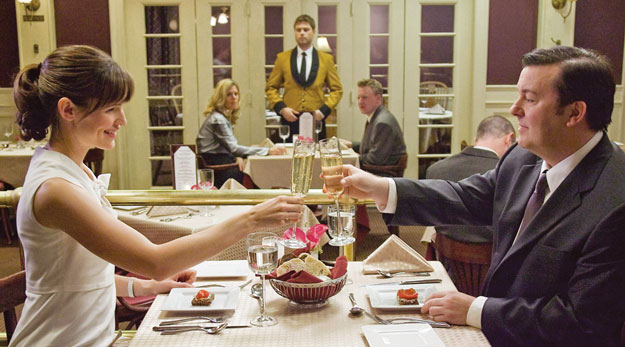 In a world where no-one lies – not because everyone’s virtuous, but because the idea of telling an untruth has simply not yet occurred to anyone – Mark (Ricky Gervais) writes films.
But in such a world, screenwriters are limited to history, and stuck with the 1300s – the most unpopular century, apparently – none of Mark’s scripts are being produced, so his boss (Jeffrey Tambor) has no choice but to fire him.
His colleagues (Rob Lowe & Tina Fey) delight in telling him they can’t wait to see the back of him.
The previous night, on their first date, his dream woman, Anna (Jennifer Garner), cheerily told him she didn’t want chubby, stub-nosed children, so she wouldn’t be seeing him again.
Jobless, Mark goes to the bank to see if he can scrape together enough cash for his rent. Suddenly, he realises that if he says he has more money than he knows he actually does, he could walk out with a pile of extra cash.
He can’t wait to share this new concept of “saying something that isn’t” with his few friends, but they simply don’t get it. How did he beat the casino? How did he persuade the police officer who stopped his drink-driving friend that he was fit to be at the wheel?
And he’s keen to explore just how far he can milk this great power. Can he get his job back? Can he cheer up his dying mother? Can he win Anna’s shallow heart?

This doesn’t quite add up to the sum of its many impressive parts.
It gets off to a storming start, introducing the unique selling point of this world with a series of sharp, quick-fire gags – both visual and verbal – mocking our insecurities and assaulting the advertising industry.
But soon, the inconsistencies start creeping in – an inability to lie doesn’t mean they have to blurt out everything that’s on their mind (if you don’t like someone, it doesn’t mean you have to tell them) – does an inability to lie necessarily equate to an inability to feel shame (just because you can’t lie, it doesn’t mean you’d answer the door to a stranger with the phrase “I’ve been masturbating”) – how does he learn to lie, and why doesn’t anyone else? Would it not be more insightful if his newfound powers are worn down by others catching him out or catching him up?
But Ricky Gervais is likeable enough in another nebbish role to make such quibbles almost forgivable. And just when you think the gag is wearing thin, he delivers his masterstroke.
On her deathbed, Mark’s mother says she fears “an eternity of emptiness.” To put her out of her misery, he comes up with the biggest lie of all. After you die, you go to a better place, with all the people you love, and all the luxuries you want. With her mind at rest, she can die with a smile on her face.
But his little white lie is overheard by the hospital staff and soon, people around the world are hanging on Mark’s every word about what happens after you die and the weird and wonderful ways of “the man in the sky.”
At its heart, The Invention of Lying is the most brutal and savage assault on religion since The Life of Brian, wrapped in a romantic comedy.
But the weak, romcom elements let down the rest of the film. The story is facile – unless he’s intentionally burying a cutting commentary within a frothy, unconvincing romcom.
There’s a frustrating conflict at its core. It’s critical of Anna for being so shallow – interested in guys only for their looks – yet we’re meant to support Mark’s love for a woman whose only attractive quality is her appearance.
Remarkably, Ricky Gervais is carving himself a niche, playing chubby, snub-nosed, British romantic leads in Hollywood romcoms – and here, while playing a version of himself again, he’s a far more likeable loser than his misanthrope from Ghost Town. But this casting could start to grate if his screen persona doesn’t take another direction soon.
The film improves, the more you think about it afterwards; the weaker elements are easily forgettable, leaving you to remember only the impressive satire and gags.
As a satire on advertising, it hits the mark. It’s as a satire on religion where it’s at its incendiary, unforgettable and incontrovertible best. But it’s being sold as a romantic comedy – its weakest element.
Gervais’s TV reputation has attracted some impressive cameos and as a debut feature, he’ll get noticed. But it’s perhaps a little bold, with an assault on religion that could rub religious American money up the wrong way. But it’s quite possible that those being targeted by his blistering satire wouldn’t even realise, seeing the film as little more than a twee and rather weak romcom.