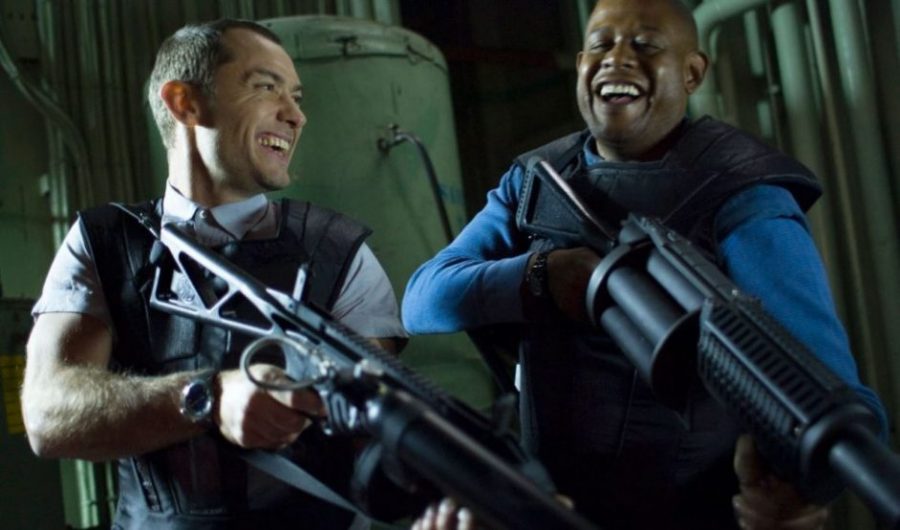 In the not too distant future, medical science has progressed to the extent that we no longer have to wait for people to die so that we can receive their organs – the private medical firm The Union provides mechanical ones for those in need.

But they’re so expensive that most patients can’t afford to pay for them outright and enter payment plans.

Much like with car loans or mortgages, if you don’t keep up your payments, your organs will be repossessed.

Remy (Jude Law) and Jake (Forest Whitaker) and the “repo men” of the title, sent to retrieve organs from defaulting customers.

They’re brutal and ruthless, ripping chunks of metal from the bodies of helpless, screaming patients.

But when one job doesn’t go to plan, Remy ends up waking up to find that his smarmy boss (Schreiber) has given him, well, sold him a mechanical heart.

To add to his woes, he’s lost the fire that drives him and can’t bring himself to rip his victims apart to return their organs to base.

But if he can’t work – he can’t afford to make his own payments – so before long, the Repo Men are out to get him.

The film-makers haven’t just taken the well-worn theme of “the hunter becoming the hunted” – they’ve also borrowed liberally from just about every sci-fi and fantasy film of the past thirty years.

Visually, thematically, technically and narratively, Repo Men borrows from everything from Minority Report and Total Recall to Blade Runner and Brazil. It even has a taste of Monty Python’s Meaning of Life, with organs being removed from the living and a fight scene has been repossessed directly from the South Korean thriller Old Boy.

It’s slick, well-choreographed, fast-paced action with a nice touch of big brother about it, but there’s really nothing original about the story – even down to Remy’s broken marriage.

The film is also oddly anachronistic. It’s set far enough into the future that we can be kept alive with mechanical organs and the totalitarian state can kill you if you fail to keep up payments. But it’s set close enough to the present that they still drive Smart cars and VW Touaregs and wear clothes that wouldn’t look odd on the high street today.

And it’s one of the most gratuitously violent films of recent years, with blood sprayed liberally around scene after scene – and one particularly painful sequence towards the end, where a beefed up Jude Law gets a chance to show off just how hard he’s been working those abs.

But for two lead actors who’ve brushed with Oscar, there’s nothing to challenge either of them.

You’ll need a strong stomach – possibly even a mechanical one – to last through this charmless bloodfest, but for audiences brought up with the paranoid chase film, although tremendously derivative, it’s not without merit.