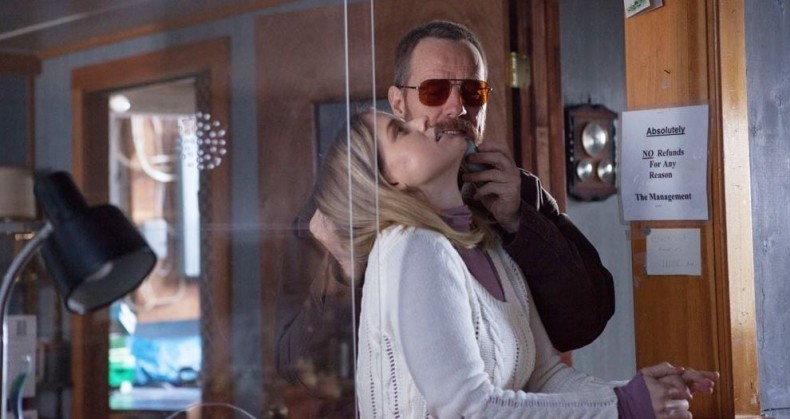 Young mother Chloe (Alice Eve) runs a sleazy motel in upstate New York. It’s mostly frequented by itinerants, small-time criminals and hookers – some might suggest it’s not the best kind of place for Chloe to be bringing up her primary-school-aged daughter, Sophia. In fact, the local social services threaten to take the girl into care if Chloe doesn’t move somewhere more suitable.

As if to confirm what an inappropriate place the motel is to bring up a child, one night, Chloe is woken by screaming and a gunshot. She rushes to the room in question and finds a known prostitute and a passing motorist bleeding to death.

As part of the police investigation into the incident, Chloe’s elicit paramour, local officer Billy (Logan Marshall-Green), impounds the dead man’s vehicle. With officers still swarming around the motel, the dead man’s associate, a half-blind, softly-spoken Polish drug smuggler, Topo (Bryan Cranston), glides into Chloe’s office, takes her and Sophia hostage, at gunpoint and forces them to help him complete the delivery that his driver’s death has hampered.

But when they break into the police car pound, they find the package he’s meant to be carrying across the border has already been removed from the car.

Tze Chun’s low-key crime thriller is one of those small-scale films that feel much bigger than it has any right to be on screen.

With a key cast of three – the disabled gangster, the crooked cop and the reluctant heroine – and a handful of drug dealers and similarly anti-social characters filling out the background, the simplistic story pits three strong personalities against each other as they each fight for their survival.

What makes it stand out is that it never quite goes where you might think. A half-blind gangster loses his driver on the way Canada so he kidnaps a woman – you might think to drive him the rest of the way. But through a series of largely believable twists and turns, the story continuously keeps you on your toes.

The film suffers from a few too many cliches and stereotypes, it’s a little pedestrian in its delivery, some of the plot points somewhat stretch credibility and the title hardly trips off the tongue, but as a traditional low-budget B-movie, it’s an effective piece of entertainment.