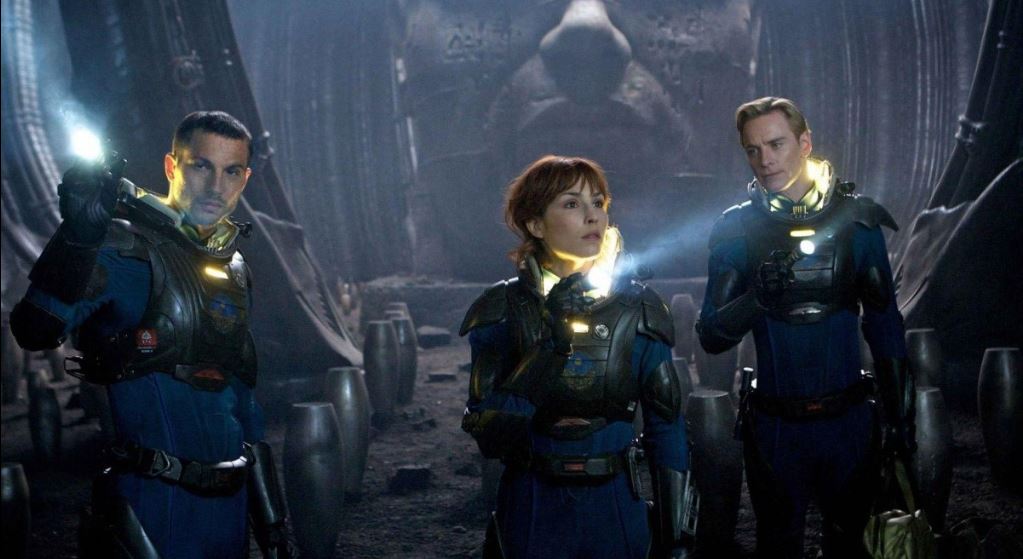 It’s approaching the end of the 21st Century and two scientists, Elizabeth (Noomi Rapace) and Charlie (Logan Marshall-Green) believe that similar pre-historic cave paintings by unrelated cultures point to the origins of mankind being in the far reaches of the universe.

A major corporation, Weyland Industries, finances a scientific mission to the suspected birthplace of the human race, under the command of Meredith Vickers (Charlize Theron) and the captain, Janek (Idris Elba).

The crew, the scientists and a group of their colleagues are put into hibernation for their two year journey, under the watchful eye of an almost life-like android called David (Michael Fassbender).

Arriving at their destination, the team are stunned to find an apparent road, leading to a structure that can’t possibly be natural.

They set out to explore, in the hope of finding whoever – or whatever – might have created mankind.

But an encounter with an extra-terrestrial creature jeopardises the mission.

Anyone who hears anything about this film will know that if not a prequel to Scott‘s own 1979 science fiction horror Alien, it’s at least set in that universe and involves events some time before the crew of the Nostromo first encountered the xenomorph that’s returned several times in the classic film franchise.

As such, Prometheus – the name of the space ship – has been awaited eagerly by fans and will be judged accordingly.

Elements from the original Alien film are scattered throughout, but you don’t need to recognise them to enjoy this as a work in its own right. Anyone expecting answers to questions arriving from its predecessor will have to wait; Sir Ridley says there will have to be at least two more films to fill the gap between the end of this film and the start of Alien.

Taken as its own entity, Prometheus is certainly a grand affair, sumptuously designed, that attempts to raise questions as profound as where we come from, but it’s not subtle; after an initial throway comment from one character who’s just “in it for the money” and Theron’s pronouncement that her agenda does not involve contact with any aliens (which begs the unanswered question of why her company has financed a mission to meet our maker), geologists, biologists and archaeologists alike are more likely to spout philosophy than discuss their everyday lives in the rec room.

Where there is complexity to the characters, it is more likely to be through poor rather than clever writing and many of the supporting roles are drawn so slightly – or incompletely – that we neither know them nor care whether they make it home alive; some are so brusque that we’re actually quite keen for them to “meet their maker” in the more traditional sense of the phrase. And by virtue of being an android with no feelings, Fassbender’s David is necessarily blank – as difficult to like as he is to comprehend. But he’s not the only one whose motivations are unclear.

In terms of the micro-plot, rather than the universe itself, too much is left unexplained – while at more than two hours, it doesn’t feel overlong, it does feel like a few scenes were left on the cutting room floor that could have helped us make more sense of what’s going on.

Sir Ridley Scott is a veteran of the genre so he knows how to generate tension and build an atmosphere, but while he does this effectively, he also deflates the mood with some of the worst cliches in the universe; characters vaulting across widening chasms just in time or trying to escape a threat by running away in the direction it’s travelling, when they could simply step aside into safety.

Elsewhere, you find such incoherences as a character having no problem reaching somewhere we later discover that the only way out is to abseil and a woman jealously guarding a possession we are later told was designed exclusively for men.

How Prometheus will eventually fit into the franchise can’t be judged, as we don’t yet know whether the dots will ever be joined – and if so, by whom. But as things stand, it’s not an especially rewarding chapter to the bigger story. Trailers involving a recognisable Guy Pearce (rather than under tonnes of prosthetic wrinkles as he appears here) promised more.

But as a science fiction thriller in its own right, it is adequate – visually attractive, exciting and thought-provoking, as it tackles the big questions of the origins of mankind and the nature of humanity, alongside chilling and shocking alien encounters. But little, in that sense, is new.

And this is a perfect example of 3D adding little to a project – and no, I’m not asking to have things thrown out of the screen at me but arguing that two dimensions are generally sufficient for the telling of most stories.

Prometheus is better than average – but for a film of this provenance, that’s not enough. It’s like flying across the universe for two years to discover the origins of mankind and not getting the answer you’d been hoping for.