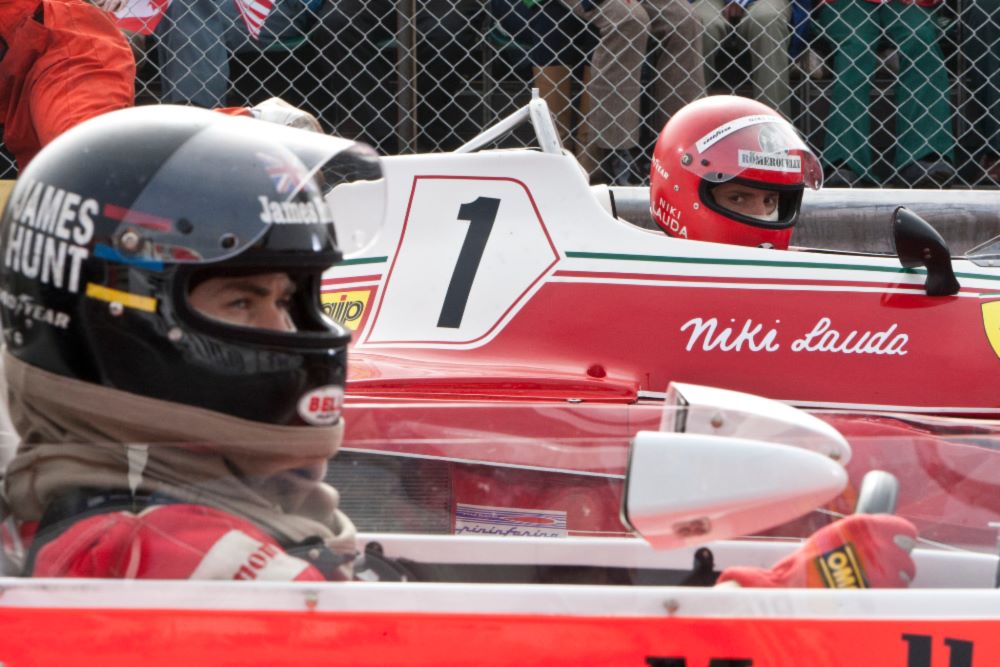 In the early 1970s, two ambitious young motor racing drivers are working their way up from Formula 3 to Formula 1, pushing each other to reach the top of their game and challenge the champions of this most dangerous of sports.

James Hunt (Chris Hemsworth) is a womanising Englishman, who seems to be more interested in what his celebrity can do for his social life off-screen than what is ability on the track can do for his reputation.

Niki Lauda (Daniel Brühl) is a blinkered Austrian, estranged from his wealthy relatives for choosing motor racing over the family business, determined to decode the mechanics, the science and the theory of the sport; with the numbers on his side, his chances of success are improved.

In an era where the sport was so dangerous that it wasn’t unusual for two drivers to be killed every season, the clash of these titans results in a season that will never be forgotten.

Many critics see Asif Kapadia’s Senna documentary as the definitive film about motor racing, but until now, it hasn’t really had too much competition. For a dramatised telling of another intense rivalry, Ron Howard couldn’t have done much better than Rush.

His film is trying to work on two levels – as a boys’ own fast-and-furious style thriller and as a character-study of two men who will stop at nothing for success, but in very different ways.

The racing scenes are exhilarating. From hearing the roar of the engines on the grid to watching the world whiz by at 180 miles an hour, from an inch or two off the ground, anyone with a passing interest in the excitement of the sport will be gripped. It’s almost shocking to admit, but it’s one of the few films that might have gained something from being shot in 3D.

Any real Formula 1 enthusiasts will probably remember every twist and turn of each race of the 1976 season in detail, but for anyone else, the way the fortunes of the two drivers flipped back and forth feels like it could only happen in a movie. It’s surprising that no-one has put such a nail-biting sporting event on the big screen already.

When the film comes off the track though, it’s a little less successful, which is particularly unfortunate for Howard, because with audiences in the US being less familiar with F1 than those in the smaller film markets, he might have been relying more on the characters to carry Rush.

But the film’s dramatic problem is that neither of the main characters is in the least bit likeable. There’s no need to root for one or the other, because history has already decided, but if it’s between the cocky womaniser or the shady know-it-all, many people might wish high-speed crashes on both of them.

It’s troubling that in the UK, where James Hunt should have been the stereotypical good-guy in this story, against the rat-like Germanic bad-guy, it’s actually Lauda who comes off a little more honorable and it’s certainly the case that in the modern day, with its more politically correct sensibilities, an alcoholic, drug-taking, womaniser wouldn’t even be allowed into a car, let alone be feted by the press as a hero.

Perhaps more empathetic are the women – Olivia Wilde as Hunt’s first wife and Alexandra Maria Lara as an unlikely muse to Lauda – but their characters are lightly drawn and pushed to the background, although in a film about two egos in racing cars, that’s excusable.

A somewhat faster pace than his usual subject matter, writer Peter Morgan tells an adrenaline-filled story in a text-book fashion, and takes a few liberties here and there to increase the narrative tension, not least about the key point of the film; the hatred and rivalry between the two men – in reality, off the track, the pair were good friends and even shared a flat earlier in their careers.

But a script is nothing without a good director to bring it to the screen, and reunited with his Frost/Nixon writer, Howard, too, acquits himself well. He presents the period perfectly, down to a slightly desaturated 1970s TV look and he manages to turn out a film of Hollywood proportions on a budget more suited to the British film industry.

There is perhaps a little too much detail in some of the TV and radio commentaries, but while expositional, it might serve as helpful for anyone not too familiar with the sport or more specifically, that fateful season.

Chris Hemsworth is effective as the charming, smarmy Hunt, although he struggles to keep his Australian accent at bay, at times. And there seems to be little reason to have cast Wilde as his wife, unless it’s a Richard-Curtis-style ruse to get American audiences to watch films that might otherwise be slanted towards Europe. Daniel Brühl, though, seems to have been born to play this role, looking and sounding every bit the self-serving rat Lauda is portrayed as being.

Some of the most enjoyable acting comes from the backroom boys – the likes of Stephen Mangan, Julian Rhind-Tutt and Christian McKay all put in strong performances.

A wise man learns more from his enemies than a fool learns from his friends, Lauda tells Hunt after the end of the 1976 Formula 1 season. He went on to win a total of three world championships, run his own motor racing team and set up two commercial airlines – while Hunt died a tragically young death.

The 1976 Formula 1 season was a cracking competition that provided audiences then – and now – with some tremendous entertainment and drama, but history had other ideas.