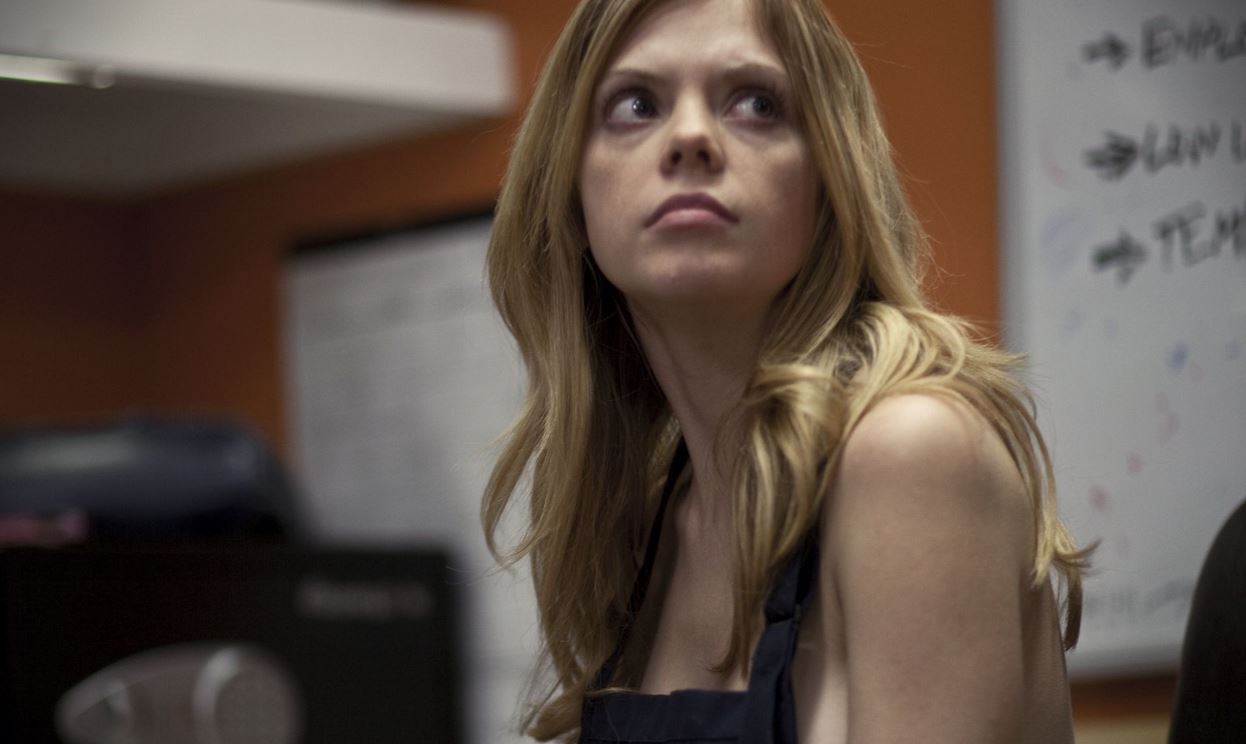 Fast-food outlet manager Sandra (Ann Dowd) is having a bad day. She’s arrived at work to find that someone left the freezer open; the bill to replace the food that’s gone off is $1400.

Her state of mind isn’t helped by the lack of enthusiasm from her staff, including cashier Becky (Dreama Walker), cook Kevin (Philip Ettinger) and supervisor Marti (Ashlie Atkinson).

Oh. And she’s expecting a secret-shopper from the regional headquarters to check that everything is up to standard.

So the last thing she needs on a day like this is a phone-call from the police, alleging that a blonde member of staff has stolen from the purse of a customer. “Becky?” she asks, with exasperation.

The caller says he doesn’t have enough officers to get down to the restaurant straight away, so Sandra has to search Becky’s pockets, then her handbag and then when the money still doesn’t turn up, he orders Sandra to carry out a strip search. Sandra does what she’s told.

When still nothing is found, he tells Sandra to guard Becky until he can free up some officers. In the meantime, Sandra needs to get back to work, so she calls in her fiance to take the next watch. When he arrives, he too finds himself doing what he’s told by this authority figure, almost without questioning, even as the demands become increasingly outlandish – and frightening.

Recalling the Milgram psychological experiments, in which the subjects felt compelled to do things suggested by authority figures, even though they believed they were morally wrong, this film is based on the case of a real-life prankster who made dozens of calls in which managers unwittingly abused their staff, believing that they were assisting police with investigations.

The performances – particularly from Ann Dowd as Sandra and Dreama Walker as the beleaguered Becky – are inch perfect as Sandra is torn between keeping her business going in troubled times and her civic duty of helping the police, while Becky’s plight, out of the blue, is completely out of her hands to resolve.

For most viewers – even without having read about the film – it would be absolutely clear from the start that the caller was not really a police officer, but it’s easy to see how naive – or otherwise flustered – honorable citizens might fall for a convincing and persuasive voice, offering instruction, sympathy, reassurance, congratulation and gratitude in equal measure.

At first, the demands are innocent, but as the caller feels how suggestable Sandra is, gradually ratchets up his requirements in an unrelenting drive towards complete domination. As the film progresses and Becky’s torture becomes deeper, it the tension becomes unbearable; what is he going to demand next – is he going to get away with it – would I fall for that under pressure – how long will it take for someone to twig?

Compliance is a compelling piece of film-making, gripping viewers as it heaps on the shocking reality of the weakness of the human mind. Clearly not everybody would fall for it – indeed, Becky’s humiliation comes to an end when one character follows through with his suspicions – but almost certainly, the real-life antagonist would have abandoned many more attempted pranks when his targets realised what he was doing.

It’s a difficult watch – perhaps even more so for people who have experienced workplace bullying or harrassment – although what’s perversely clever is that the bullying and harrassment here, while clearly enforced by the employee’s own boss and colleagues, is the result of an unseen caller, raising the prospect of who is actually guilty of abuse? And are some of them victims too?

The film-makers go some way to answering that question, but some critics argue that Becky is almost forgotten, as if the sexual harrassment of a vulnerable young woman is just accepted and the real crime is the caller’s fraud. Feminist writers have accused the film-makers of turning the crime into a sexually titillating male fantasy; it’s certainly clear that the further the fake policeman pushes his unwitting accomplices, the more pleasure he gets – but the suggestion here is that it’s more about control than sexual gratification. For him, the scam would work as well with a male as with a female employee, but it’s certainly a valid question to ask whether society would be as unquestioning and allow him to get away with that. And part of the power of the film comes from what it shows – it has to be blunt to show us outsiders the impact that what some might see as a harmless prank. But we’ve recently seen in the news, with the tragic case of the Duchess of Cambridge’s pregnancy nurse, that prank calls can have devastating consequences, and there’s certainly no suggestion here that the film-makers are egging on the antagonist – they’re clear that what he does is beyond the pale.

This is not a film about a man seeking gratification from his powers of persuasion – this is a film about the consequences of his actions – a film about the human condition – it’s about his victims – it’s on their side not his. And if seeing this shocking film makes some people stop and think before following through with instructions from authority, some good could come of it.