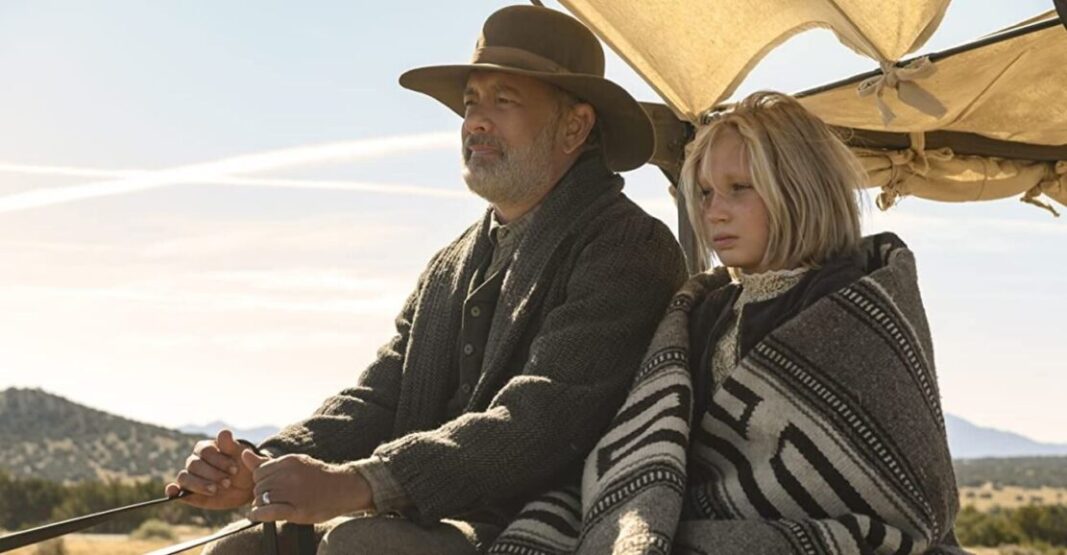 Travelling between towns one day, he encounters a frightened young girl, Johanna (Helena Zengel), left for dead in the woods by the gang that killed members of the Native American tribe who’d brought her up since they’d kidnapped her from her own parents, some years earlier.

The Captain takes it upon himself to escort her four hundred miles south to her only surviving relatives.

The reluctant orphan can’t speak English, which doesn’t help the Captain’s efforts to bond with her on a traumatic journey, during which they encounter some of the worst that the wild west has to offer.

The last time Tom Hanks played a “captain” for Paul Greengrass was in 2013’s taut thriller Captain Phillips – alongside United 93 and the Bourne films, demonstrating the kind of frenetic film-making the director is best known for.

This is a much more laid back and thoughtful drama – not without the excitement of the odd gunfight or sandstorm, but News of the World is more about character than plot.

Throughout the film, the veteran at its heart is harbouring a secret about his past, while his unexpected sidekick is as much in the dark about her present as she is about her past.

It’s an odd-couple road-movie of sorts, as the pair find whatever means of transport they can to travel nearly four hundred miles, to come to terms with the past, overcome the present and build a future.

The journey brings the pair closer as he learns more about her needs, she learns to trust – and they both learn a bit of each other’s languages. Narratively, there’s a little too much use of subtitles earlier in the film, when it might have made more dramatic sense to leave the audience as much in the dark as the captain about what Johanna is saying in her adopted Native American tongue.

The captain is a typical Hanks character – friendly, honourable and reliable. The young German newcomer Helena Zengel is more of a blank canvas, relying largely on her face to make herself understood, as  this troubled child with a complicated past has to grow up quickly.

In the closest to what 1870s Texas had to social media, Captain Kidd entertains crowds by reading stories from newspapers – not including the News of the World, as its title might suggest to British viewers.

The grand vistas of the Texan wilderness are impressive and lack a certain something on the smaller screens most people will be admiring them on, another film visually squeezed by the pandemic, from cinemas to Netflix.