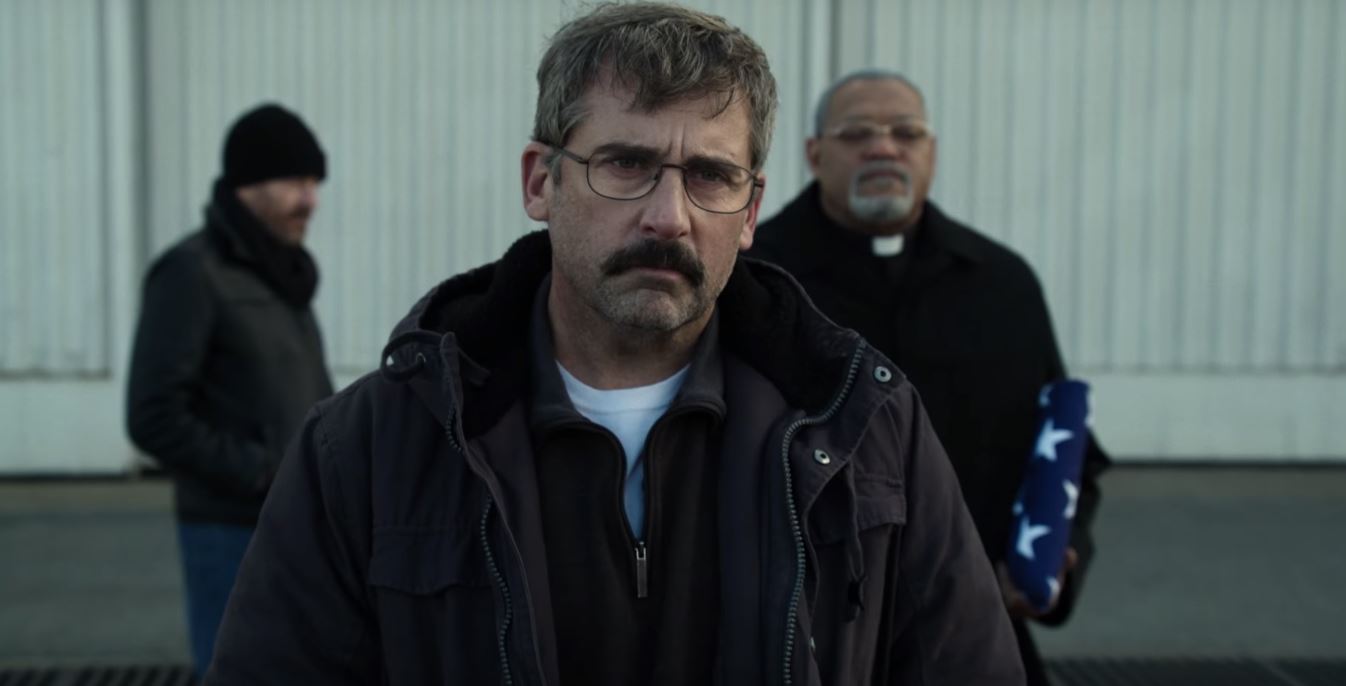 In 2003, thirty years after he served in Vietnam, Larry (Steve Carell) receives the news that his son has been killed in combat in Iraq; he died a hero and will be given a ceremonial funeral at Arlington.

His own time in the military came to an ignominious end, but with no other family or close friends to accompany him, Larry decides to round up some comrades from Vietnam to help him retrieve and bury his son’s body.

First he traces loud-mouth former marine Sal (Bryan Cranston) in the run-down bar he owns and then the pair of them find a reformed party-animal, Richard (Laurence Fishburne), who’s now a church pastor in a small rural town.

As the three set off on a road-trip, first to collect the body and then to take it to its final resting place, they reminisce about the past and contemplate the future.

But most important to Larry is to come to terms with the events of the present.

Richard Linklater has had a tremendously varied career, from intimate talkie comedies such as the Before Sunrise, Before Sunset and Before Midnight trilogy, to his sprawling Oscar-nominated drama Boyhood, via slacker comedies including Dazed & Confused and Everybody Wants Some!!, a biopic of Orson Welles, darker drama, such as Tape and the animated psychological thriller A Scanner Darkly and the raucous musical School of Rock.

From time to time, he’s also dipped his toe into topical issues, in films such as Fast Food Nation and again here, with Last Flag Flying pontificating on war and the military, through the prism of both the Vietman and second Iraq wars.

Linklater’s fizzing dialogue and casual direction attract many of the finest and in-demand actors to his lower-budget productions. But this is a case where a top-notch cast, working close to their best, can’t unpick a somewhat confused tone.

Having tackled a full range of genres in the past, Linklater throws a bit of everything into the pot here:

Drama – the burial of a dead son, comedy – the unlikely reunion of a mismatched group of old army comrades in a road-movie, farce – as the transport of the body takes on its own difficulties, issues – with much discussion about the honour of military service and the acceptability and necessity of war.

It plays like a madcap road-movie with hilariously mismatched friends but this doesn’t sit comfortably alongside subject matter revolving around death and honour. It’s true that humour is often used to make tragedy more bearable, but not like this.

Bryan Cranston’s enjoyably cocky bar-owner seems to be satisfyingly similar to the young marine he was thirty years earlier, Laurence Fisburne’s pastor is about as far as he can get from the wild-man of their unit, while Steve Carell, in another of those dramatic roles that he occasionally – and successfully – inhabits, makes for a difficult central character – necessarily underplaying a man who was picked on by men in his youth and picked on by life in his middle-age.

Almost worse than having a protagonist whose past and present will be far from anything most viewers will have experienced – or will want to, is the fact that it’s never really clear why he’d want to take these two particular comrades with him on such a personally tragic journey in the first place; the somewhat slow narrative is quick to throw up many reasons why the three have had little to do with each other for three decades, rather clumsily revealing the back-story through exposition.

Oddly, for a film which appears to be trying to present the military – the authorities rather than the footmen – as the bad guys, as a viewer, you’re more likely to come away with the feeling that while there is a degree of dishonesty at play, we’re hardly talking big-time corruption here – perhaps a little white lie is an acceptable way to help the bereaved come to terms with their loss. Perhaps pride is preferable to pointlessness, if the alternative – full transparency – isn’t the message you might want to hear.

There’s a scene in which the three amigos seem to undermine the point of the film by playing along with the scenario that the whole narrative seems to be railing against.

A post Breaking Bad Cranston is particularly entertaining, as he appears to be enjoying returning to his comic roots, while apparently trying to escape from his, Carell seems comfortable enough to let Cranston lap up most of the comedy.

You do get the feeling of redemption as spending this time together brings some closure and understanding to this disparate trio.

But there doesn’t seem to be enough of a point to this story and we don’t learn much about ourselves through the journey of these characters. We know people die in wars, we know they are survived by family members, who know that those family members will struggle to come to terms with their loss. What this film does has to offer is a comparison between the participants and the consequences of two wars, three decades apart, but this seems to slip through their fingers as they miss an opportunity to deliver something fresh.

Adapted by Darryl Ponicsan from his own novel, alongside the director, Last Flag Flying is a well-performed but slightly over-written, almost mawkish love-letter to military veterans that feels genuine on the surface but somewhat hollow underneath.