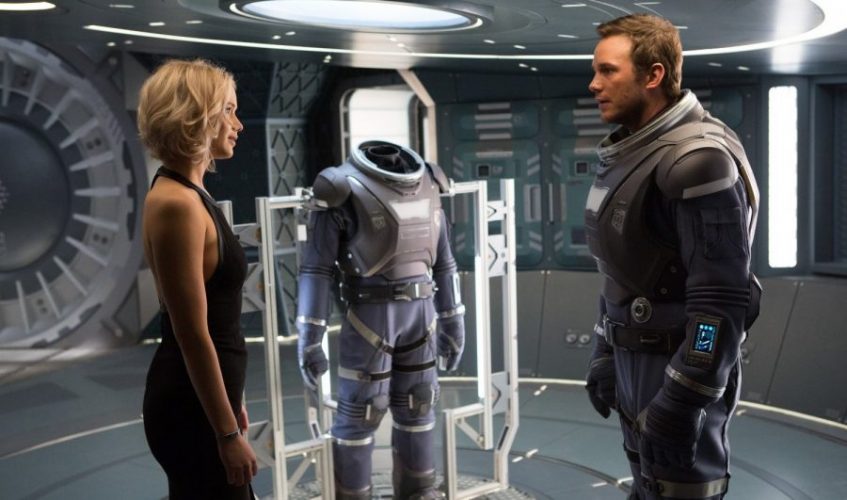 The Starship Avalon is on a 120 year voyage, taking five thousand passengers – in hibernation pods – to start new lives on the Homestead 2 space colony.

When mechanic Jim Preston (Chris Pratt) wakes up, a hologram informs him that he is about to enjoy four months of luxury on board the Avalon until it reaches its destination.

But it soon becomes clear that no-one else has woken up. Something went wrong with his hibernation pod and he has woken up 90 years early.

With the prospect of spending the rest of his life alone on the Avalon (Michael Sheen’s android bar-tender doesn’t quite cut it as a long-time companion), Jim faces some tough ethical decisions as he considers his options.

Can he work out how to get back to sleep? Can he get the Avalon to turn back to Earth? What if anyone else’s hibernation pods were also faulty?

I don’t want to spoil any of the fun for you, but you’ll have seen from the posters and trailers that, in the event, Jim doesn’t have to spend the rest of his life alone.

But I won’t tell you how he ends up hanging out with the talented young writer Aurora (Jennifer Lawrence) and how she helps him investigate some of their options and make the most of their predicament.

Passengers is an unusual film in that almost nothing feels original, yet it feels thoroughly fresh – and its rare that a film set in deep space feels quite so minimalist, yet claustrophobic.

The idea is simple, but the story takes us on a satisfyingly unpredictable journey and it’ll be hard for anyone not to identify with some of the tough decisions the characters face.

Visually, the Avalon and its surroundings are imaginatively presented, and this vision of the future has plenty of satirical comments to make about our growing reliance on technology.

Perhaps inevitably, a point comes in the narrative where the imagination and ambition run out and the plot becomes a rather more formulaic race-against-time thriller and it becomes increasingly unlikely and incoherent.

But for most of the film, viewers will be carried along like passengers on a thrilling, shiny new roller-coaster.