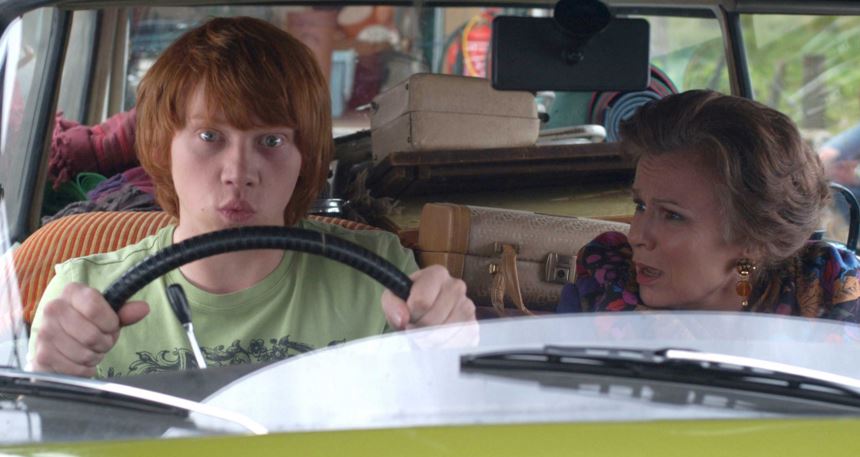 Ben (Rupert Grint) is an awkward seventeen year old, completely hopeless in social situations as a result of his sheltered upbringing by his vicar father and the happy-clappy, evangelical mother Laura (Laura Linney) who’s just taken in a middle-aged mute, who does nothing but eat, sleep and prance around in her clothes all day.

In order to help the family support him, Laura suggests that Ben gets a job. He stumbles across an advert for an assistant for an eccentric ageing actress, Dame Eve (Julie Walters) – Evie to her friends, if she had any.

The shy, withdrawn teenager is completely unable to tame the wild woman, who tricks him into driving her around the country – like an extended driving lesson – but, as you’d expect, learning to drive isn’t the only thing he learns.

Well, I suppose it would be uncharitable to suggest it wasn’t at least moderately likeable at times, but it’s all rather inconsequential stuff.

Just because the story happens to be based on the true-life experiences of the writer/director, who served a similar apprenticeship with Dame Peggy Ashcroft, it doesn’t make the concept of an “unlikely friendship” developing across the generations any more original. There’ve been similar tales told before, and in the circumstances, this one doesn’t seem particularly insightful.

And neither character is particularly likeable – it’s only the fact that the mother he really should be distancing himself from is so objectionable that makes us care – and we’re urging him to rebel against her, but there’s nothing particularly noble about rebelling unintentionally, or indeed accidentally.

This seemed to be a theme too – a protagonist who seems to have no real control over his life – life just happens to him. A passive protagonist is unsatisfying for the viewers, as there’s no point us identifying with him or willing him to do one thing or another, as he doesn’t make any decisions anyway – they’re all made for him.

Then there’s the houseguest, Mr Fincham, a more pointless and surreal character I don’t think I’ve ever seen. His existence served no purpose to the story – if anything, he just got in the way. Maybe there was a “real-life” Mr Fincham in Jeremy Brock’s life, but in this film, he seems to serve no purpose other than to add humour – and it was neither funny nor coherent anyway.

Just about the most excitement for me was seeing how many Hampstead Garden Suburb locations I could recognise.

Stripped from his magic, Rupert Grint’s character is such a blank canvas, we have to do far too much work to make anything of him. Julie Walters is clearly having fun, but we’re not seeing anything we haven’t seen her do many times before, and better. As for the Oscar-nominated Laura (despite my not inconsiderable acting talent, the English accent isn’t my strong point) Linney, what on earth is she doing in this?

It seems like one of those low budget scripts that got financed only because of the talent attached – but what on earth were they attached for in the first place?