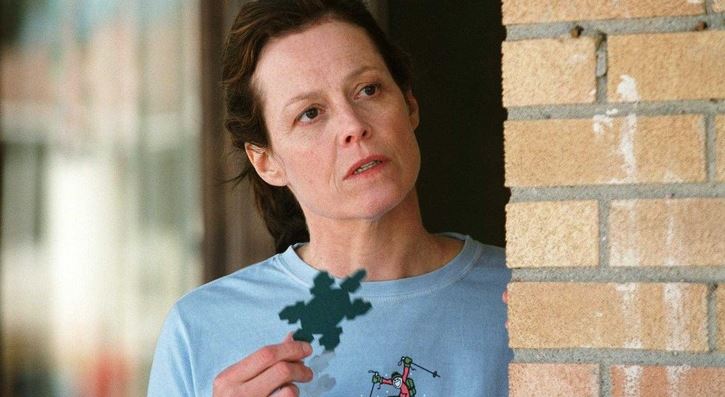 As they pull out of the car-park, a lorry slams into the side of their car, killing Vivienne instantly.

Wracked by guilt, Alex sets out to find Linda to express his deep regret.

When he locates her, she’s not in the least bit interested in his sincere apologies. She just doesn’t want him wearing his shoes in the house and she certainly doesn’t want him in her kitchen.

Whether through guilt or newfound affection, Alex decides to stay to look after Vivienne for a while – and he ends up falling for the caring but ill-regarded neighbour, Maggie (Carrie-Anne Moss).

What stands out about this film is its performances.

Sigourney Weaver’s autistic woman appears to be very convincing – not that I have much more experience of autism than having watched Rain Man – a repeated reference in the film.

Alan Rickman’s hapless “straight man” has some strong moments too, although most of the film, he’s underplaying the role to such an extent you feel he might forget to breathe and fall over.

Carrie-Anne Moss is perhaps the most realistic – if least interesting – of the key characters.

Once you put aside watching the character quirks, there’s not really much left to this film. It’s too slow and inconsequential to grab the audience.

The twists and turns in the plot are more contrived than convincing, Alex’s dark past is revealed through clumsy exposition and we never really believe in the relationships or care much about who’s doing what with whom.

He’s not cantankerous enough at the beginning to make his journey to selfless carer a satisfying one and Linda, necessarily, hardly changes throughout the film.

If executive producers Steve Coogan and Henry Normal – known for their comic creations on the big and small screen – are seeking to earn some dramatic feature credits, this certainly isn’t the film to do it for them.