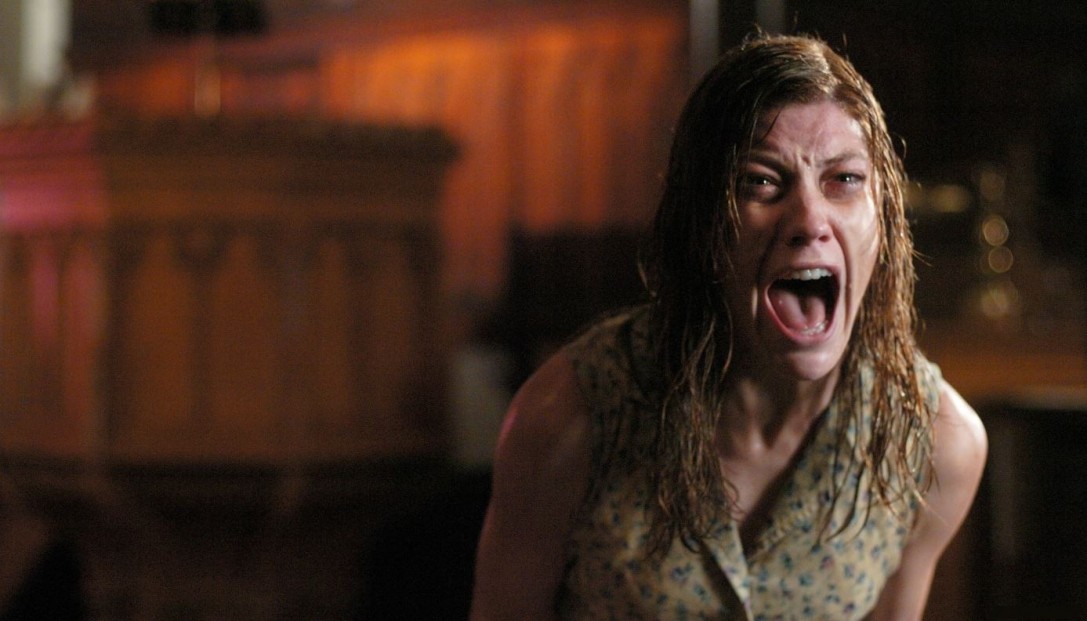 As we join the film, Emily (Jennifer Carpenter) dies a horrible, painful, diabolical death.
She’s been possessed by demons and an exorcism has failed. Or so says her priest, Father Moore (Tom Wilkinson).
The police believe otherwise and charge him with manslaughter, for pursuing the exorcism, rather than letting her take medication.
Lawyer Erin Bruner (Laura Linney) is hired as his defence lawyer, the plan being that he should take plea bargain, but he remains defiant and refuses.
With the prosecutor (Campbell Scott) putting her death down to lack of treatment for a psychiatric disorder, can Erin convince the jury that Emily was really possessed, or will Father Moore embarrass the church by becoming a convicted killer?

This film cleverly interweaves a demonic possession horror movie with a courtroom drama. The performances from the leads – particularly Wilkinson and Linney, but also Carpenter and Scott – are confident, smooth and moving enough to hold the two strands together.
With a court being asked, in effect, to rule on the existence of God, this film plays a little like a serious and much darker version of Billie Connolly’s recent Australian film, The Man Who Sued God. But in this case, it’s the supernatural rather than the natural that’s at stake.
And the fact that the exorcism doesn’t work brings this more into the realm of reality, making it more ambiguous. On the one hand this makes it more open, allowing people from both sides of the argument to identify with the characters to some extent – but on the other hand, it means the film-makers can’t really come down firmly on one side of the argument or the other, so it fails to give a dramatically satisfying conclusion.
It’s one of those films where anyone too close to the subject is likely to see it as less balanced than an impartial viewer might. I watched it with a neuroscientist who grew increasingly annoyed at the film’s persistence to explore the idea that a girl could actually be possessed, when for him, it was so obvious that she was mentally ill. But believes might be offended by the extent to which the film presents scientific explanation for apparently spiritual happenings, offering a string of eccentrics to put the religious side.
Don’t be put off by this film’s assertion that it’s based on a true story – the case in question apparently happened in Germany in 1976. It’s best enjoyed by putting all background out of your mind and enjoying it for the thriller that it sets out to be.
So for anyone without a vested interest in medicine or religion, it’s an original new take on both courtroom dramas and paranormal thrillers, that’ll keep you jumping and guessing until the end.