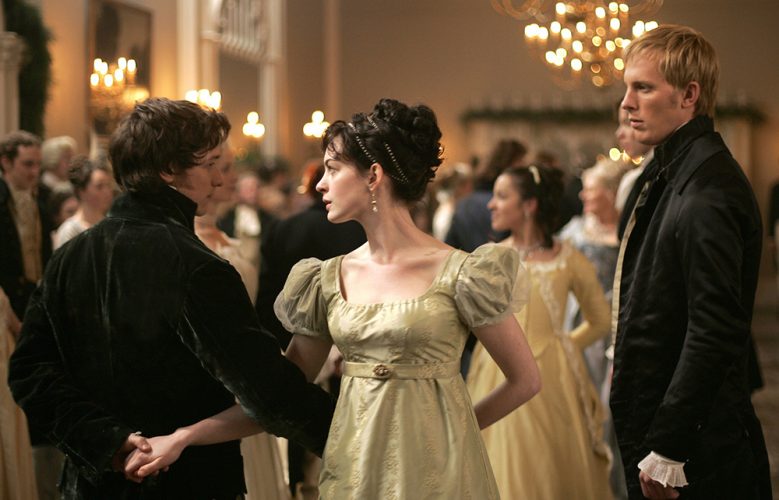 Jane’s parents (Julie Walters and James Cromwell) want her to marry for money, as was the done thing in 1795, but when she meets the young and dashing Lefroy, all sense goes out of the window.

At first they don’t get along and lock horns constantly but their continuous clashing soon turns to love.

The reality is that although they decide to elope together, he has to take care of a large number of brothers and sisters and the only way he can do that is by marrying into money.

That is what he does and Jane goes on to become the successful and classic writer that we all know and
love thanks to her misfortune in love.

The only true facts about this story are:

c) in late 1798 Tom returned to Ireland to practice law where he married the sister of a schoolfriend and named his first daughter Jane.

The rest of the tale is sheer fabrication.

Directed by Julian Jarrold (Kinky Boots), this film dispels the myth that Jane Austen was a cold, dusty old spinster, portraying her as a very passionate young woman who was ahead of her time fighting against the pressures of the society she lived in, i.e.the marriage market.

Shot in Ireland, in the counties of Wicklow, Dublin and Meade, it’s a stunning looking film and the look and tone of it is very Austenesque with nods to the author’s world and her renowned works.

The main players show features and qualities of certain characters in Jane’s novels.

The film-makers were very bold in casting two non-English actors in the quintessentially English roles but their gamble pays off. The American actress Anne Hathaway gives a spirited, feisty yet flawless performance as Jane. Like Renee Zellweger and Gwyneth Paltrow before her she passes herself off as the English rose with flying colours.

The Scottish actor James McAvoy gives an equally impressive performance as the dashing Irishman, who wins Jane’s heart proving that he has the makings of a good romantic leading man.

Hard core Austen fans might be disappointed and upset in the licence taken by the film-makers but this is a very reverent film about their much loved author.

It’s a lovely and thoroughly enjoyable movie. It highlights the inequalities between men and women at the time and how Jane fought against them – a theme that runs throughout her works.

It’s the perfect movie to go and see on a miserable, wet and cold Sunday afternoon. Think twice about dragging your man along though.