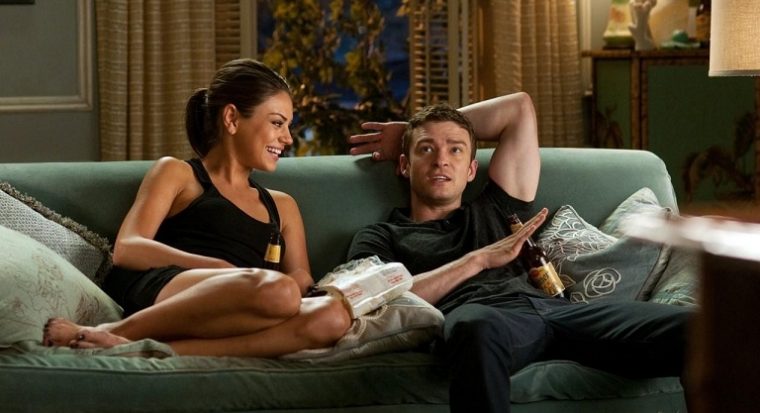 He doesn’t know anyone in town and there’s clearly an attraction between the pair, but they’re both recently out of relationships, cynical about all things romantic and certainly not ready to get emotionally involved again.

Given that they’re both on the same page, they come up with the tried and tested formula of getting what they need from each other without having to give too much back – a “no strings attached” relationship, if you like – hang on – that’s that other film – these guys become “friends with benefits” – which is a totally different thing altogether – it must be, otherwise they wouldn’t be making another one with the same story so soon, would they?

Well, wouldn’t you know – as time goes on, true feelings start to get in the way of their arrangement, throwing their friendship into jeopardy.

Will they stick to their guns or give in to their emotions? Well, if you saw No Strings Attached, you’ll know how this ends.

It’s impossible to view this film out of context – it is the second film in a few months that essentially follows the same formula and given that most rom-coms follow a similar formula anyway, that makes it even more brave – or stupid – of the film-makers to follow such a similar vein.

But such is Hollywood that two sets of film-makers might have a similar idea at roundabout the same time and if the final delivery is distinct enough, there’s still scope to push on with them both – whether it’s Volcano and Dante’s Peak, Armageddon and Deep Impact or even Infamous and Capote.

The boldness of Will Gluck and his team in so-doing is all the more noteworthy since not only does Friends with Benefits follow No Strings Attached’s plot so closely, but its screenplay tries to mock the traditional rom-com formula, while ultimately falling into line. Initially, it seems to be knowingly pushing boundaries, but ultimately, it falls back into line; it’s not entirely clear whether they realise they are falling into their own trap – or whether they’re setting themselves up for a fall, deliberately trying to flout the laws, but failing.

But here’s where the films diverge. In Friends with Benefits, the lead characters have more personality and charm individually and their chemistry as a couple is more believable. Their back stories are more convincing and the unfolding of the plot feels a little more coherent.

OK, so it’s still arch cute and has the illogical decisions made as the script contrives to keep them apart for a few more scenes, it shouldn’t take the wisdom of a dementia-sufferer to come up with the startling revelation that when you find the right person, you shouldn’t let them go, and the running gag of using flash-mobs is not cool and hip as they clearly believe – but rather cheesy. But at least this film doesn’t have a crazy race-against-time denouement and it’s fun to see the odd musical interlude from Timberlake as he continues his transition from singer to actor – following up Bad Teacher with another creditable comedy role.

Friends with Benefits is lacking in ambition, clichéd and formulaic, but it’s better than No Strings Attached and most of its failings are excusable, because you’ll leave feeling upbeat, and as such, like it or not, it’s likely to manipulate your emotions and leave you feeling just that little bit more optimistic and positive about the world.