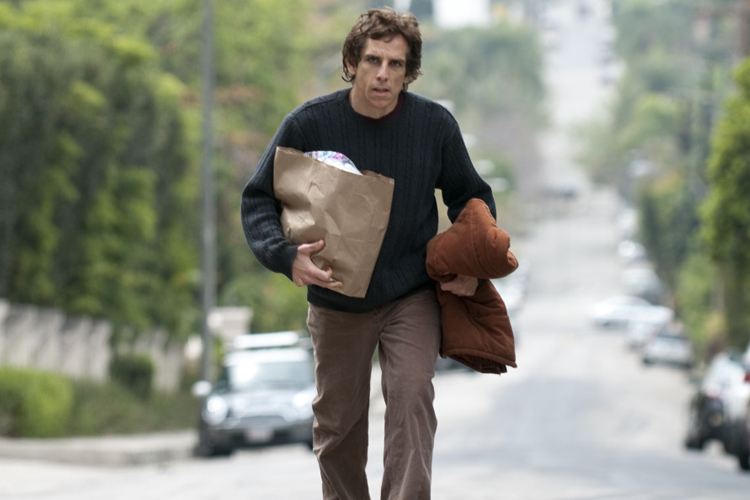 Roger Greenberg (Ben Stiller) is a failed musician who’s long since given up the LA lifestyle for a more down-to-earth existence in New York. He neither drives nor swims, which clearly make life in the City of Angels a little more difficult than it needs to be. But after a brief stint in hospital with depression, he’s moved back to Los Angeles to house-sit for his brother, while he’s on holiday.

Now working as a carpenter, Roger is doing nothing with his life – intentionally – other than writing letters of complaint to major corporations and building a kennel for his brother’s dog.

Roger is finding it tough to manage in the house on his own, but his brother’s personal assistant Florence (Greta Gerwig), is happy to help – particularly when it comes to looking after the dog.

When he gets out of the house, Roger is happy to meet up with his best friend and former band member Ivan (Rhys Ifans) and his former girlfriend Beth (Jennifer Jason Leigh).

Ivan is having problems of his own, with his estranged wife and daughter, while Beth is not remotely interested in reconnecting with Roger.

A morose mess, Roger soon alienates everyone he hasn’t already pushed away, with his self-obsessed misery. Only the slightly eccentric Florence retains an inexplicable warmth towards him, but he manages to push even her support to the limit.

Roger Greenberg is one of the least likeable film characters of modern cinema, yet unlike Casey Affleck’s Lou Ford from the recent The Killer Inside, Greenberg – while unlikeable to those around him – carries a certain charm for the viewer. I suppose it helps that unlike Ford, he isn’t a ruthless killer – but then, there aren’t many killers walking the streets, while many of us know miserable losers who do their best, consciously or otherwise, to bring us down.

Ben Stiller’s success in keeping the audience with him is as much to do with his own underlying likeability as it is the writing.

This has the surprising effect of putting the audience in Florence’s shoes, rather than Roger’s. We don’t feel his frustration and we certainly don’t share his self-pitying despair, but we can understand why she can’t help but want to help him and be there for him, all the same.

This film is to Stiller what Punch Drunk Love was to Adam Sandler – an edgy dramatic role for an actor previously known mostly for wacky comedies.

But while Stiller’s performance is effective and the dialogue is sharp – at times painfully so – the film itself is a little underwhelming, because you can remain interested in a miserable loser for only so long.

There are some worthy moments where he – and other characters – come to terms with their past – but the revelations aren’t surprising or in any way rewarding and rather than sharing their catharsis, as viewers, we just think “about time too.”

All of this is particularly disappointing, given the strength of Noah Baumbach’s 2005 bittersweet The Squid and the Whale, but compared with the interim Margot at the Wedding, this is a welcome step in the right direction.

Produced and co-written by Baumbach’s partner, Jennifer Jason Leigh, and set among the Hollywood entertainment community and its periphery, you have to wonder how much of what we see is in some way autobiographical, but ultimately, it doesn’t really matter, as we don’t get to dig very deep.