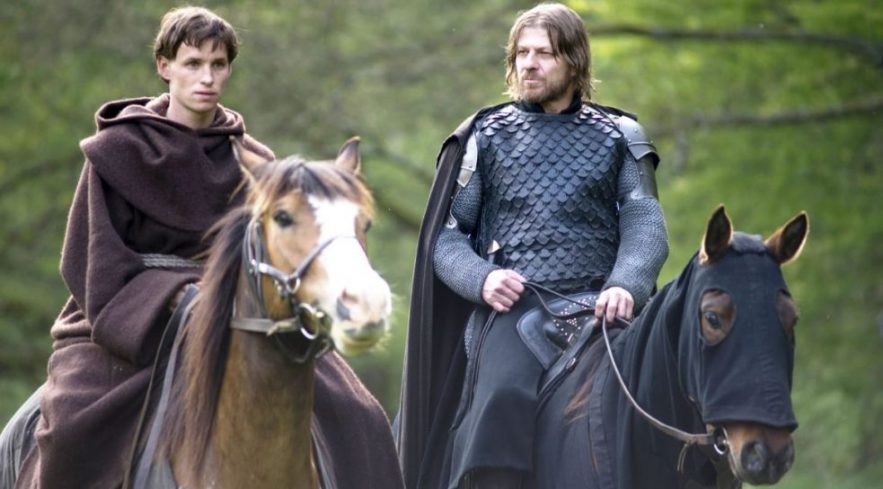 In the fourteenth century, the Black Death is tearing its way through community after community, leaving bodies piled high in the streets. Even men of the cloth aren’t being spared.

Word gets to the city that there’s a small village where residents seem to be protected from the plague – and rumour has it that it’s a devotion to Satan that’s keeping them alive.

The bishop’s knight (suddenly, chess makes a little more sense) Ulric (Sean Bean) leads a military mission to find these devil worshippers and teach them the error of their ways, using all the available methods of torture of the time.

But having no idea where this village is, he takes a young monk Osmund (Eddie Redmayne), who hails from that neck of the woods.

Before they even reach the village, the mission is already not going to plan, as they’re ambushed by a band of warriors every bit as ruthless as them.

But when they arrive at their destination, no amount of preparation can prepare them for the community that they find; a community that will challenge their view of this world – and the next.

The fourteenth century is a period rarely seen on the big screen and this suitably grimy and bleak depiction of the Late Middle Ages is frighteningly effective.

This is among the goriest films of recent years – with brutality on a par with Apocalypto – which, from what we read in the history books, is probably quite an accurate portrayal of the time.

Tackling the conflict between believers and non-believers – or more accurately, god-fearers and devil-worshippers – this has some interesting things to say about religion and how violence was used to enforce godliness.

What makes this element of the story perhaps even more effective is the fact that seven hundred years later, whether it’s Northern Ireland, the breakdown of Yugoslavia, the Middle East conflict or the rise in Islamism, violence is still being used in the name of God.

But while the film explores some interesting themes and the production design is effectively grueling, the film fails in two key areas – the plot and the performances, both of which are a little unconvincing.

The characterisation is predictable with familiar dynamics both within groups and between groups. And many of the performances seem flat, possibly because of the stilted dialogue you might expect from the period; it’s very functional and drives the story, but I suppose fourteenth century monks and soldiers wouldn’t have chatted about the football or their favourite soap opera.

And with most of the characters being monks or knights, the film is bursting with testosterone.

The creepy villagers stand around looking ominous and deliver their lines too deliberately, so it’s clear to us that something odd is going on, long before it’s evident to our naïve protagonists.

The pacing is uneven, as the protagonists jump in fits and starts from one set piece to another, on their quest. And the narrative tools that bring about the denouement are simplistic and cliched and the corny coda doesn’t help.

And being as gory as it is, the film might be realistic, but it doesn’t make for a particularly appealing or comfortable film-going experience.

Director Christopher Smith’s previous films include Creep and Triangle, which suggest that the horror is more important to him than the depth.

Perhaps it’s the case that people who want an intelligent dissection of religion would prefer an intricate narrative to such gruesome, muscle-ripping violence – while the subtext of the plot background will be lost on the kind of viewers who enjoy the bloodlust at the expense of coherence.

Many viewers will get immense satisfaction from parts of this film. Few will enjoy it in its entirety.