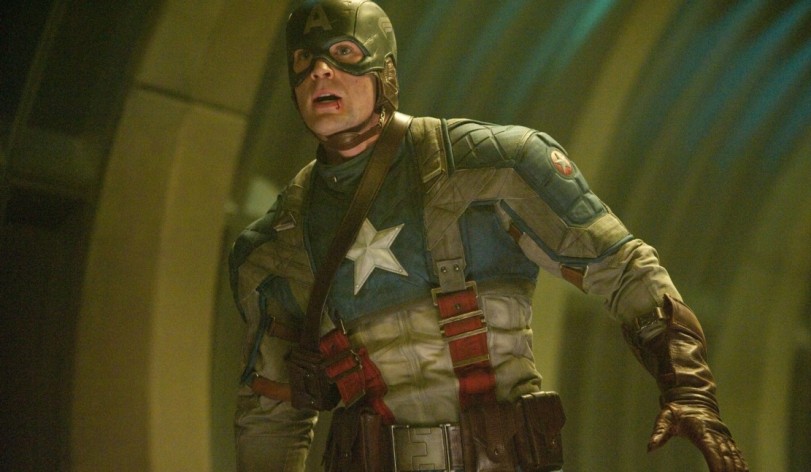 Steve Rogers is a puny, sickly American patriot, desperate to serve his country during the Second World War. Every time he goes for a medical, he’s rejected, so he makes up a new identity, tries again and gets rejected again.
His enthusiasm is detected by Abraham Erskine (Stanley Tucci), a German scientist who’s now trying to help the US defeat the Nazis who’ve taken over his homeland. Erskine has developed a special serum, which gives people strength and persuades Colonel Chester Phillips (Tommy Lee Jones) to allow him to test it on Steve Rogers.
One injection of this mysterious blue liquid and the wimp emerges as a tall, muscular, powerful warrior.
But rather than sending Steve to the frontline, the army dresses him in a patriotic red-white-and-blue leather outfit and sends him to army recruitment centres to stoke up support. He even gets sent to boost the morale of the troops on the frontline.
It’s not until the costumed Captain America slips away from an army base and single-handedly rescues hundreds of GIs who’ve been caught by the enemy that he’s finally taken seriously and given a worthy mission.
His task is to confront Johann Schmidt (Hugo Weaving) – otherwise known as Red Skull, the ruthless, megalomaniacal leader of a Nazi faction known as Hydra, which eschews traditional weapons in favour of the kind of technical delights reserved for comic-book bad guys.
Luckily for Captain America, the shield provided by Howard Stark (Dominic Cooper, playing the father of Iron Man’s Tony Stark – we’re in the Marvel comic universe here, just so you know) is about the only thing in the world that can protect him from Red Skull’s vaporising gun!

Comic book films – on the whole, you either love them or find them puerile, but some sit somewhere in the middle.
Captain America sits closer to the positive end, but certainly has its failings.
He’s big and strong and has a really, really protective shield – it’s hardly flying, having ex-ray vision, flinging webs out of your wrists, but I guess it’s on a par with being big and strong and having a big hammer (Thor) and it’s certainly more convincing than being able to make anything you think of out of green energy (Green Lantern).
But there’s much to be admired about Captain America – the determination of its plucky protagonist, as he turns from unter-wimp to über-warrior, the everyman nature of how are regular Joe can become a hero without any magical powers, one-man-standing-up-against-an-evil-army and more specifically the kind of Nazi-bashing we saw most recently in Ingourious Basterds.
We get some unexpectedly humorous moments from Tommy Lee Jones’s colonel, Stanley Tucci provides some touching moments and Hugo Weaving makes for a suitably heartless antagonist.
Visually, it’s an effective recreation of the 1940s, blended, unusually, with Hydra’s ultra-modern weaponry. The effects are also remarkable – seeing the head of Chris Evans being transferred from the body of Mr Puniverse to Mr Universe, without seeing any joins, is impressive.
The action is exciting and well-paced and Chris Evans is an understated but sympathetic hero, all of which makes Captain America oddly thrilling, but the story itself is rather linear – and although our main character’s muscles certainly develop, his character doesn’t really. Ultimately, he’s more of a war hero than a super hero.
You can imagine that a film like this would’ve been used during the war in the same way that the Captain America character in this film is used to boost the morale of the troops on the front-line – it’s a rabble-rousing, Nazi-bashing, festival of heroic patriotism.
So if you like the idea of one unlikely hero against the world, with the help of little more than a magic serum and a shiny shield, this is for you – if you want the complexity of the tortured souls of the Bruce Wayne or Peter Parker, you’re not going to find any true drama here.
And that’s always the problem with these films; should they be pushing the comic-book geek (rather than chic) or the dramatic narrative or is there a balance to be struck between them?

Of course, like so many of the current crop of super-hero films, Captain America is in 3D. Usually, I’d be joining the anti-3D bandwagon, bemoaning how dark and drained of warm reds it looks, urging people to whip their glasses off and watch it in 2D – something mercifully that can be done for much of the time, with the newer technology. And indeed, for much of the time, while it adds a little depth to the image, it comes as no great surprise to our minds – conscious or subconscious – that the stuff in the background is a bit further away than the people in the foreground.
But Captain America has gone some way to persuading me that the extra dimension can have its uses. It’s the first 3D film that’s ever made me jump out of my seat. OK, so I had to wait about an hour and a half to get there and it was only this one fight scene where every shot brought the screen to life, but it satisfied me that in the right circumstances, it can be effective. It also vindicated my initial view that overuse dilutes its effectiveness; one big jump per film makes it feel special – but is it worth all that expense for one big jump per film?

WHAT PLANET ARE YOU ON?

Alongside the battle of good versus evil sits the battle of DC versus Marvel.
Each comic book stable – or universe, if you like – has some characters in the Premier League and others pottering about in League Two.
DC has brought us the Superman and Batman films, but it’s also inflicted Green Lantern upon us. Marvel has treated us to Spider-Man, the X-Men, The Incredible Hulk and Iron Man, among others, but we’ve also had to endure the likes of Daredevil.
In short,there are good and bad from both, but Marvel seems to have more characters to choose from and they’re very keen to shake it up a bit and let their characters populate the wider world and turn up in each other’s films. Tony – Iron Man – Stark turned up in The Incredible Hulk. Nick Fury turned up in Iron Man, Thor and here, in Captain America. This is all preparing us for next year’s comic-book super-blockbuster, The Avengers – in which Captain America, Iron Man, Thor and the Hulk will all be joined by a handful of other Marvel characters.
Meanwhile, in a universe far far away, DC is still keeping its characters apart, working on the next instalments of Batman and Superman.
However you look at it, there’s plenty of life left in both universes.