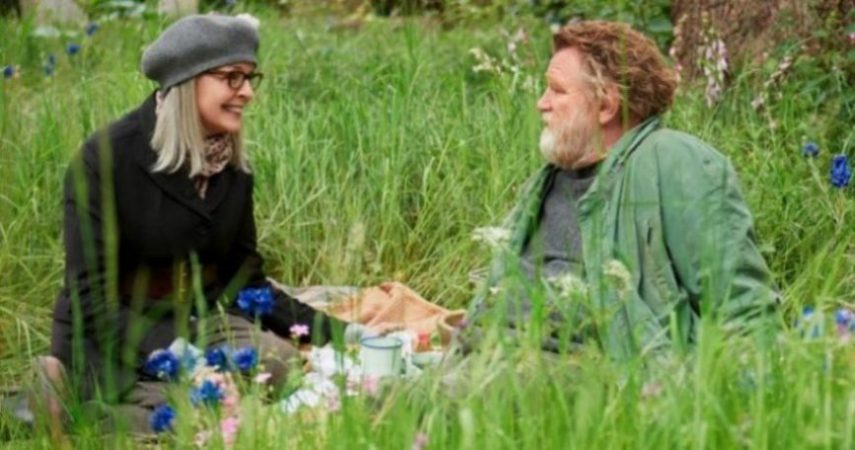 Charity-shop worker Emily (Diane Keaton) is a widow, trying to hide the fact that she’s rapidly running out of money and can’t even afford the upkeep of her plush apartment, overlooking Hampstead Heath.

Donald (Brendan Gleeson) is a somewhat eccentric recluse, who’s been living a self-sufficient lifestyle in a shack he’s built in a clearing in the woods, on the edge of the Heath.

Do you think these two might meet cute? Do you? All we need is a catalyst?

As it happens, a property developer is trying to turn a disused hospital into a block of luxury flats and Donald’s pocket of land happens to be part of the hospital’s grounds. When Donald is issued with an eviction notice, he refuses to budge.

Emily’s friends and neighbours are backing the developer’s planning application, as they think it will increase the value of their own properties. Emily thinks otherwise and after contriving a meeting with him, she decides to side with Donald and help him fight a legal battle to stay on his land – not that he wants her help.

He enjoys her company though and soon, she starts to feel the same way. But as she develops feelings for Donald – that she couldn’t dare admit to her neighbours – her friend Fiona (Lesley Manville) is determined to set her up with her cringe-inducing accountant James (Jason Watkins), who is only too pleased to help Emily get her finances straight – for no cost – well, no financial cost.

It’s hard to tell whether this is a naively immature piece of film-making or a cynical and calculated effort to appeal to fans of British romcom – or more accurately, sitcom.

Either way, with almost every beat, you feel like you’re being slapped in the face by a screenwriting text-book.

First we’re introduced to Diane Keaton, then we encounter Brendan Gleeson, then we wonder how the pair will meet.

Gleeson is enjoyable enough and largely convincing as the brusque loner with a warm underbelly, but Diane Keaton feels like she’s playing to her Annie Hall image, while trying to emulate the likes of Andie MacDowell and Julia Roberts as the “American woman in the London-set romcom”. As for the supporting characters, without exception, they’re all caricatured grotesques from central casting. The casting itself seems somewhat unlikely, with the two men vying for Diane Keaton’s affections being ten and twenty years younger than her respectively.

In fact, pitched as an aspirational tale for older folk, to appeal to a more mature audience, it works only on the level of suggesting that a woman in her seventies can attract men a decade or two younger. Other than that, it presents a peculiarly mixed message about whether aspiring to wealth is the right approach to life.

Much of the film plays like a travelogue – the phone-booth coffee-shop on Hampstead High Street, shots of various picturesque parts of Hampstead Heath, Karl Marx’s grave at nearby Highgate Cemetery and an inexplicable visit to the British Museum, to name but a few locations.

Oddly, the story itself doesn’t feel convincing, even though it’s based on a true events; the film-makers have taken dramatic licence a little too far and added elements which counteract the surprising real story and make it seem even less likely than it should. It feels like this film should hang on the skeleton of the court-case, as a retelling of the David-and-Goliath story as underdog versus the corporates, but it’s almost flippantly overlooked in a screenplay that’s more interested in reaching for – and missing – obvious rom-com buttons.

Without wanting to spoil it for anyone who’s actually intending to take it at all seriously, there’s a most preposterous plot point, immediately after the end of the court case that makes you wonder why on earth we’ve been bothering to watch the film up until that point.

If the film hadn’t already been a visually and thematically twee narrative mess, this twist – and what follows – would have sent it spiraling out of control.

There is an audience for this kind of warm-hearted, chocolate-box, la-di-da nonsense but it would have to be a very tolerant audience, accepting of pedestrian and unconvincing drama, masquerading as rom-com, where there’s very little sexual chemistry and even less genuine comedy.

Hampstead’s celebrity residents are likely to be embarrassed by this exercise, rather than excited to see their daily haunts on the big screen.