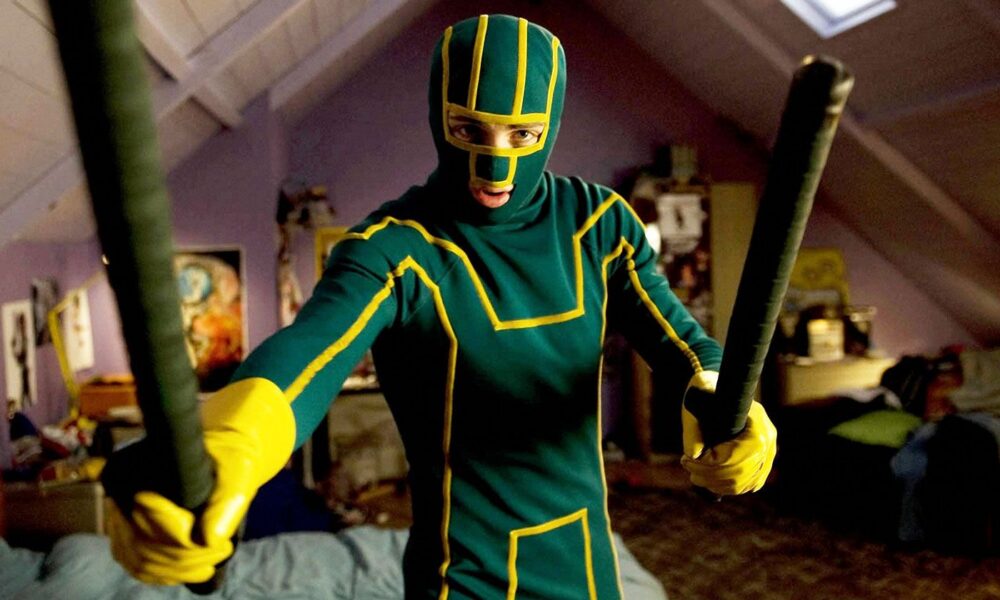 High school comic-book nerd Dave (Aaron Johnson) can’t understand why more people don’t try to prevent crime, by dressing up as super-heroes. “Because they’d get their asses kicked” is the perfectly realistic response from his equally geeky mates.

But discontent with all the violence he sees around him, Dave fashions a costume out of a wet-suit and gimp mask and sets up a website to promote his own brand of hero, Kick-Ass.

Geeky high-school kid by day and crime-fighting sensation by night, Dave ends up more than a little battered and bruised; a few press-ups and a couple of truncheons aren’t, in truth, a panacea for all the world’s ills.

But he captures the imagination of the public as he stands up for honour and considerably more by luck than judgement, puts the willies up New York crime boss Frank D’Amico (Strong).

Quietly plotting his own revenge against Frank is former cop Damon (Nicolas Cage), who’s training up his twelve year old daughter Mindy (Chloë Grace Moretz) in all the martial arts, weaponry and super-hero costume design she needs to cut crime in Manhattan single-handedly.

When Damon and Mindy – who know what they’re doing – team up with a frankly clueless Dave, Frank throws all his resources into keeping his businesses alive – including allowing his spoilt, loner of a son Chris (Christopher Mintz-Plasse) – who out-geeks the geeks – to create a super-hero of his own, in an attempt to unmask Kick-Ass and Co.

On almost all levels – from story, to character and mood – Kick-Ass, well, kicks ass.

We love and feel for the good guys and hate the bad guys. We can identify with the naïve idealism of our lonely comic-nerd hero. It’s even a clever side-swipe on a modern society that networks and watches, but never participates.

Many of the themes are amplified by the juxtaposition of his everyday life failures with the public adoration for who he becomes in his night job, despite being even more of a failure here, in truth.

Like this, in many ways, the film warmly and cosily satirises many of the comic-book hero films fans of the genre will be familiar with.

This is pitched midway between the manic idiocy of powerless heroes in Mystery Men and the much darker world of last year’s Watch Men. Setting a comic-book thriller in the real-world, with powers being replaced with weapons and fisticuffs, this film is thematically in the same ball-park as Batman, although it doesn’t pretend to have any of the darkness, gravity or depth of Christopher Nolan’s franchise.

British film-maker Matthew Vaughn, who cut his teeth as Guy Ritchie’s producer on Lock-Stock and Snatch, before turning to direction with Layer Cake, has done a remarkable trick – telling a very American story with a very British production.

Apart from getting his Snatch-star Brad Pitt to come on board as a producer, he’s taken Scotsman Mark Millar’s comic-books, co-written the screenplay with Jane (Mrs Jonathan Ross) Goldman, cast Aaron (John Lennon from Nowhere Boy) Johnson as the good guy, Mark (Lord Blackwood in Ritchie’s recent Sherlock Holmes) Strong as the bad guy and peppered it with the likes of Lock-Stock veterans Dexter Fletcher and Jason Flemyng in the smaller roles – all of them playing American.

That said, Nicolas Cage is on good form and young Chloe Moretz steals every scene she’s in, as she tackles the role with gusto.

The action sequences are thrilling and tremendously well choreographed, and if the violence is a bit full-on, it is at least in keeping with the film’s comic-book provenance.

There are plot holes, some of the emotional back-stories are a little corny – if fun – and given that it’s set in the real-world, unlike most superhero films, it feels rather too much like a fantasy.

But it if you can stomach the comic-book violence, it’s a thoroughly entertaining, vibrant roller-coaster of ass-kicking fun.