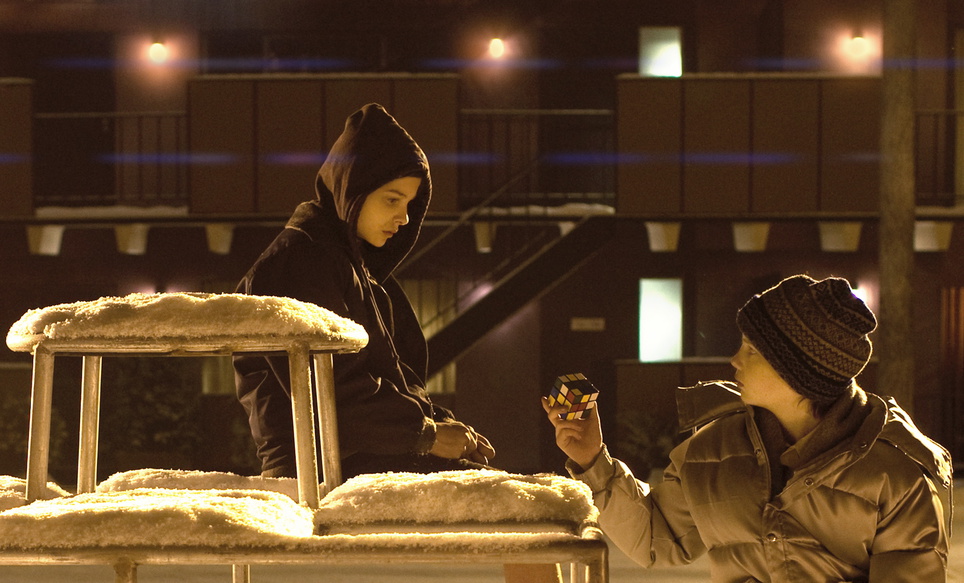 Twelve year old Owen (Kodi Smit-McPhee) is an only child – and a lonely child. He gets picked on at school and spends most of his spare time sitting outside, alone, on the housing estate where he lives with a mother who has little time for him.

The arrival of a young girl, of about his age, raises his hopes, but Abby (Chloe Moretz) is quick to inform him that she can’t be his friend. She lives alone with a man (Richard Jenkins) who’s too old to be her father, but probably too young to be his grandfather, and all we see of him is that he slopes off alone, late into the night on mysterious missions.

All this is going on against a background of unexplained murders in the town.

Despite telling Owen that she can’t be his friend, Abby – in barefeet despite a thick snow-covering – continues to play with him in the evenings, and as the days pass, the two young and lonely children form a close bond.

“Would you still like me if I wasn’t a girl?” she asks him, in a moment of emotional weakness.

Owen soon starts putting things together – unexplained, bloody deaths, a nocturnal, ageless young friend – and concludes that rather than being a girl, his one and only friend is a vampire.

This touching tale of a close friendship between two lonely young children, one of whom happens to be a vampire, whose guardian goes hunting to provide her with sustenance, is a remake of the Swedish film of the slightly longer name, Let The Right One In.

As remakes go, this is faithful enough to retain the mood and visuals of the original – even to the extent of recreating Swedish-style locations and weather in the new New Mexico setting – but not so faithful as to be a shot-for-shot remake that would make it a waste of time for anyone who can read.

The performances of the two young leads are impeccable – heart-breaking – the emptiness of their lives written in bold across their youthful, but weary faces.

Neither is happy with their existence, but neither can see a way out.

To add to Owen’s alienation, we never actually see his mother, except from behind, from a distance or out of focus – a trick which would have been more effective if it had been used for more adults than just his mother, or if his mother had been a particularly bad or neglectful person – in truth, she was just busy – which rendered the directorial flourish a little pretentious.

A more successful flourish from Cloverfield’s Matt Reeves is one of the most simply directed but stunningly effective car accident seen on the big screen for years – shot completely from a static camera on the back seat of the car.

But a huge narrative mistake is the over-used cliche of starting with a flash-forward to a moment midway through the film. Sometimes, this reveals something confusing which is explained as you see the events leading up to that moment – sometimes, it might serve as a clever distraction – other times it services little purpose other than to make a linear narrative seem more complex – but here, it actually damages your enjoyment of the film – it shows you more about the characters who would otherwise be more slowly revealed and it shows you the fate of a character before the film starts. This is not only unnecessary, but pointlessly spoils the film.

For anyone who saw the Swedish original, which came from nowhere to stun audiences across the world, this doesn’t truly have much to offer, other than heart-wrenching performances from the protagonists, but given that most people don’t visit the big screen to see small foreign films, this is an effective psychological horror, with, perhaps, a little too much of its budget spent on horror effects.

While beautifully shot, it doesn’t share the necessary bleakness of the original. And the adults feel rather neglected for characters who take up as much screen-time as they do – not least the Oscar-nominated Richard Jenkins, whose considerable skills are wasted.

But to get the most from this film, arrive ten minutes late.