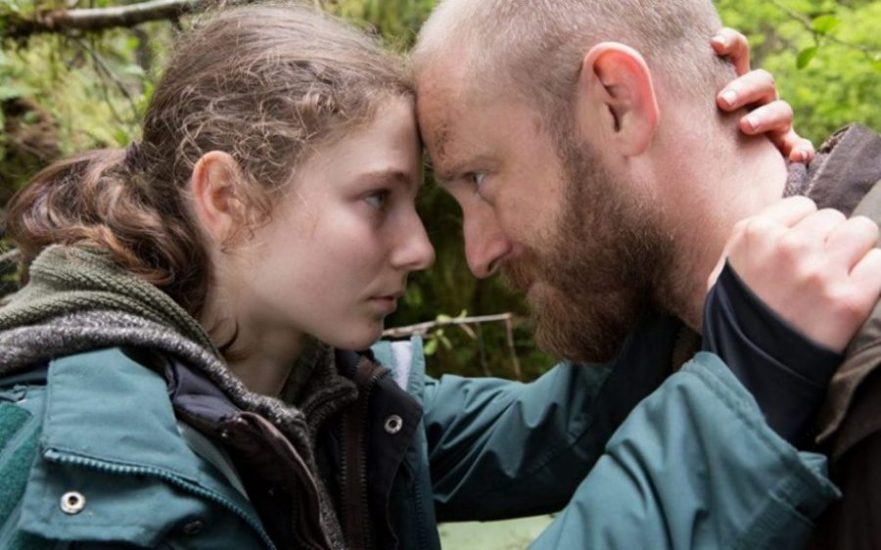 Army veteran Will (Ben Foster) has opted out of society. He and his teenaged daughter Tom (Thomasin McKenzie-Harcourt) live wild in a national park just outside Portland in Oregon.

For years, they’ve lived under tarpaulin, keeping a low profile, burying what few valuables they have underground.

But their spartan existence comes crashing to an end when Tom is spotted by a passing jogger who notifies the authorities. They descend on their camp with dogs – there’s no escape.

The authorities are sympathetic – Will and Tom are interviewed separately about their well-being and offered accommodation where they can try to rebuild a more conventional lifestyle, working on a farm.

But Will can’t settle down. He’s just biding his time until he can find the opportunity to disappear again.

Tom, though, for the first time in her life, is veering from her father’s path. In their new home, she realises that she likes socialising with people her age and she’s willing to try to give this new life more of a chance.

Debra Granik’s first feature since Winter’s Bone made as star of Jennifer Lawrence is a powerful, intimate drama with two strong central performances, but it drops you somewhat in the middle of a story and rips you out a little before the end, leaving the audience somewhat in the dark.

It’s never clear quite what pushed Will into such an extreme lifestyle, other than showing that he’s a traumatised war veteran. It’s never quite clear what’s going on inside his mind, when the authorities try to normalise his existence.

Both Ben Foster and Thomasin McKenzie-Harcourt skillfully underplay their roles, which make the characters feel all the more real, but consequently harder to understand and empathise with.

The film shares elements with the recent Captain Fantastic – about a somewhat preachy father retreating to live in the wilderness with his family for idealistic reasons – but this is more about character than plot, without telling us that much about the characters.

Drama is often propelled by having protagonists you can identify with and antagonists trying to destroy their dreams and goals – in this case, most viewers would be likely to identify with the kindly authorities who are trying to impose on the pair – and in particular, the child – what they believe to be a more suitable lifestyle.

There’s love, trust and respect between the two protagonists, prompting a somewhat emotionally ambiguous journey, in which the main source of conflict turns out to be the differing feelings about their future – but it emerges a little too organically and without enough discussion.

It makes for a fascinating insight into an unconventional father-daughter relationship that is more intellectual than emotional in its impact.