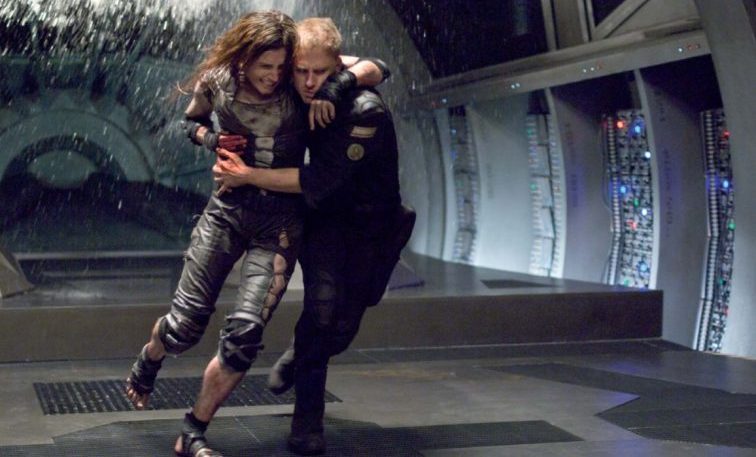 Hundreds of years into the future, two crew members of a space flight awake, with no idea who they are, where they are, or where everyone else has got to.

Middle aged Payton (Dennis Quaid) and twenty-something Bower (Ben Foster) learn their names and ranks from the glass coffins they’ve been sleeping in for goodness knows how long.

Rather than learning anything more about themselves, their priority, for now, is escaping.

The doors are locked, so the only way out is through a vent. Payton decides to stay behind by the computer to guide the younger man on his quest to work out what’s going on.

Through a maze of dark corridors, tunnels and cable-filled holes, Bower descends deeper into the bowels of the ship – the only sounds are the echo of his footsteps, the faint hum of the ship’s dying reactor, the fading crackle of his radio and the occasional unexplained noise, which leads him to believe that maybe, he’s not alone.

When he loses radio contact with Payton, it’s almost a comfort to Bower when he starts stumbling across signs of life – or more accurately, signs of death; fellow crew-members hanging from rafters and pale-skinned humanoid hunters, lurking in the shadows.

During his adventure, he encounters a handful of humans he can trust and others he can’t, as together, they begin to unravel the secrets of their transporter, with the hunters trying to stop them at every turn.

Think The Descent in space and you won’t be far off.

Neil Marshall’s horror of four years ago featured a team of potholers who get trapped underground and find themselves the prey of pale-skinned humanoid hunters, who – over centuries – have adapted to their troglodytic environment.

This is pretty much what happens here too, except the caves have been replaced by the claustrophobic tunnels and cavernous chambers of an apparently abandoned space ship.

Much of this film is people walking down long, dark corridors, jumping with fright, every time they hear or see something unwelcome.

By virtue of setting this in a spacecraft whose power is fading, everything is so dark that even when there’s something more happening that that, it’s hard to make it out.

Like with other films in the genre, you know the main character’s going to escape the first few challenges alive, or the film wouldn’t reach its running time, which eliminates much of the tension in each encounter.

The sets – and camerawork – are necessarily claustrophobic and the director certainly succeeds in creating an air of discomfort in the viewer – but it’s largely because the close-ups and shadows mean that most of the time, we – like the characters – can’t see and so don’t know what’s going on.

In that sense, we’re cheated into the experience the film-makers are aiming for – it’s the visual equivalent of the horror trick of making the audience jump using slamming doors or screeching violin strings.

But the plot is rather pedestrian – men wake up not knowing what’s going on – one escapes and walks down a few corridors, makes some alliances and fights off some beasts in his attempt to find out what’s going on – what’s going on isn’t revealed in a clever way – there’s a mixture of expositional flashbacks and wise old characters who’ve seen it all, imparting just enough information to lead everyone on, but not so much as to give us the answers we want.

The denouement, much like the rest of the film, recalls elements of other familiar – and not so familiar – space or horror films.

Many of the visuals and ideas are impressive and interesting enough, but there’s almost nothing original here and the more discerning viewers will be hoarse from shouting movie references at the screen before the end of Act One.

In that sense, this is the kind of film Tarantino might make if he fancied doing a sci-fi – he’d watch as many as he could, reshoot his favourite bits and contrive a way to stitch them together.
Science fiction films are often about big ideas, but there’s not really much to think about in this film, until we get to the conclusion, and even then, it’s not something that reflects on our own lives.

Pandorum takes itself far too seriously. It has no warmth, charm or humour to help us enjoy the journey. It’s a bleak, confusing, claustrophobic, derivative and rather unsatisfying space thriller.

The recent Moon is a much better example of how to carry off a modern-day science fiction thriller. Pandorum just churns out the best – and worst – of the past.