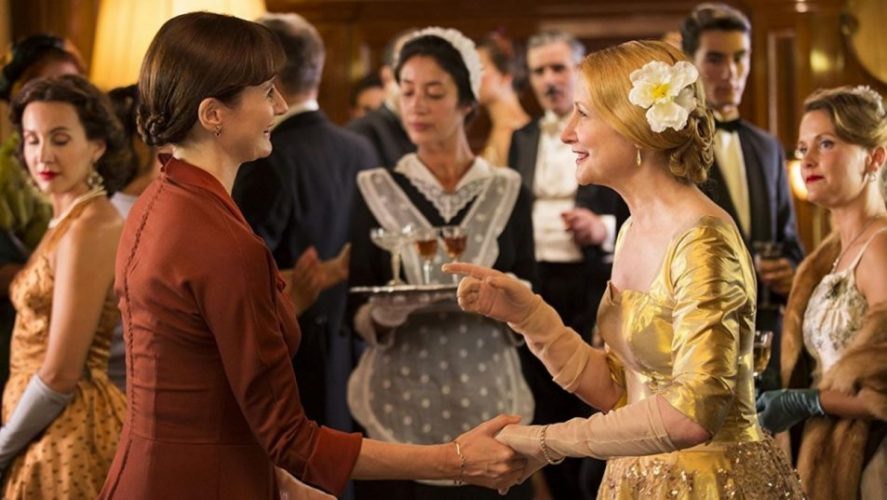 It’s 1959 and Florence Green (Emily Mortimer) has recently returned to the seaside town and the old house where she once lived with her husband, who died during the Second World War.

She’s moved in upstairs and plans to turn the downstairs into the town’s only bookshop.

The local community rally round the thriving new business, with controversial books such as Nabokov’s Lolita being particular hits with readers in the conservative community.

A local recluse Edmund Brundish (Bill Nighy) is particularly enthusiastic about the chance to get up to date with the most interesting new releases. Suspicious of his neighbours, he orders his books by letter and has them delivered by a young boy on a bike – nodding to the arrival of Amazon, some five decades later.

But from the comfort of her remote stately home, a local aristocrat, Violet Gamart (Patricia Clarkson) had had her own plans for the old house before Florence returned; she wanted it to be set up as a local arts centre and she has some powerful allies on her side.

The film has the air of a twee British period piece, which is perhaps a little odd, given its Spanish writer-director Isabel Coixet and scenery-chewing American antagonist Patricia Clarkson.

At nearly two hours, it’s far too long for a film where relatively little happens – and it feels long too. It’s slow and often dull, both in terms of the necessarily dreary 1950s fashions and interiors and because of the complete lack of incidental music, except between scenes, making it feel almost like a play, where we’re given a bit of music to entertain us while the action moves to another location.

There are two scenes where the measured conversations erupt into one-sided shouting matches – in both cases, they seem completely out of character for people who were previously quietly reasonable; while they were both under extreme pressure at the time, for two characters to explode in this way feels a little far fetched.

Bill Nighy is always enjoyable to watch – although he largely does what he always does – the cool and calm voice of reason. The film largely hinges on the blossoming friendship between his enigmatic recluse and Florence, which is mostly quite convincing, apart from one moment where it seems to get literally a little close for comfort.

Most of characters in this film are largely archetypes that could have come straight off the shelf and putting them together into one film – itself based on a semi-autobiographical book – doesn’t feel convincing. Some of the acting in the smaller roles also leaves a little to be desired.

The film neatly explores the way political power seek to crush the little person, and as the powers-that-be ratchet up their campaign against Florence, Coixet successfully rallies the audience around her.

But it’s never really clear why there’s so much antipathy from the landed gentry towards the idea of using her old house as a bookshop in the first place, not least because it’s her own house and the local community seem to love it.

And why couldn’t Violet Gamart stage the odd local cultural event at the bookshop rather than try to destroy a good woman?

And since when did anyone think a local planning battle would make riveting entertainment?