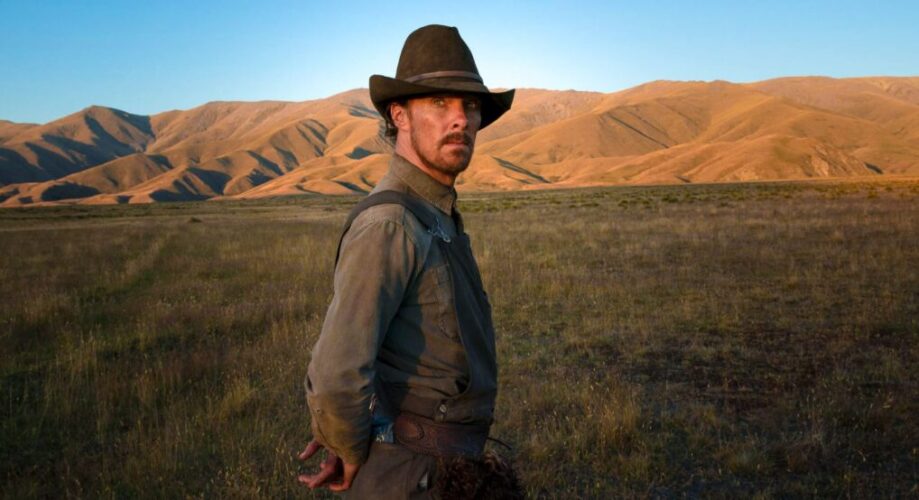 In 1920s Montana, Phil (Benedict Cumberbatch) and George (Jesse Plemons) are brothers who own a successful ranch.

During a cattle drive, the stop to eat at a restaurant run by the widowed Rose (Kirsten Dunst), with the help of her son Peter (Kodi Smit-McPhee).

Phil – a cowboy so macho, it’s almost as if the word was invented for him – spends most of the meal being generally rude and dismissive, insulting Peter’s weak frame and gentle demeanour; it was Peter, after all, who made the paper flowers used by Rose as table decorations – and by Phil to light his cigarette.

The dapper George falls for Rose and she soon moves into the ranch with the brothers; Phil doesn’t approve – he thinks Rose just wants their money – and he knows that the relationship has weakened his influence over his George.

As George tries to rise in status in wider society, Phil continues to undermine Rose at every opportunity, further damaging the relationship between the brothers.

But ghosts from the past start to emerge and Phil softens towards Peter, causing Rose to feel the loss that her arrival caused Phil. She turns to alcohol and it puts a strain on her marriage.

Is there anything that anyone can do to restore peace to this fractured, dysfunctional family?

Based on the novel of the same name by Thomas Savage, The Power of the Dog marks Jane Campion’s return to the big screen after more than a decade.

Presented in five chapters, it retains a literary feel, but Ari Wegner’s astonishing cinematography makes it almost a shame to watch it on Netflix if it’s still available in cinemas. Whether it’s sweeping aerial shots across the vast and desolate Montana (well, New Zealand for Montana) landscapes or the close-up detail of a key turning in a lock or a knife being plunged into a dead cow, it’s impossible to keep your eyes off the screen.

The film gets off to a slow start as it paints layer upon layer onto the main characters, but when the plot starts to take over from portrait, Campion’s film shots off into one unexpected direction after another, as it challenges typical perceptions of masculinity, family loyalty, love and lust.

As the two brothers, the performances hit the mark – from Benedict Cumberbatch’s scene-stealing alpha-male with a secret or two to Jesse Plemons as the understated gentleman, trying to find love and meaning in his life.  Kirsten Dunst is a little more of a foil for the narrative to blow from side to side, constantly squeezed between the three men in her life. And you’re never quite sure what’s going on inside the head of the wiry, erudite and quietly determined Kodi Smit-McPhee.

At its heart, it’s a story of how the arrival of a woman tears two brothers apart – but the complexities of the situation are fascinating to unpick.

Watching the power dynamics develop keeps you on your toes, as Phil’s anger and petulance are driven by Rose pulling George away from him, while Rose turns to alcohol when she feels Phil pulling Peter away from her. From the outset, Phil is a bully, with a need to control everyone around him. But is his interest in Peter simply to take back control from Rose?

Even as the narrative starts to unfold, many of the nuances are told with subtlety enough that you have to pay attention and not become too complacent about the slow pace.

Campion and her cast produce vulnerability and viciousness from where they’re least expected and manage to surprise without feeling contrived.