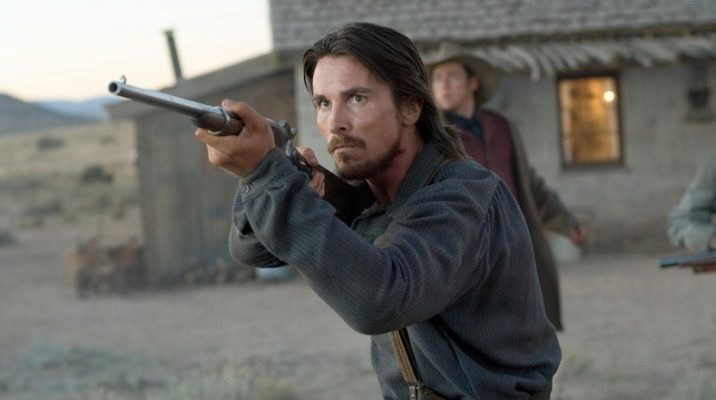 Rancher – and civil war veteran – Dan Evans (Christian Bale) is destitute. Things aren’t helped by the fact that a local businessmen is close to forcing him off his land. He can no longer support his family and his son is losing respect for him.

So when a fearsome gang leader Ben Wade (Russell Crowe) is arrested, Dan accepts a lucrative – and almost suicidal – job as part of a team, escorting Wade to the prison train.

As the journey progresses, Wade uses his cunning to weaken his captors, while his gang-members, under the ruthless leadership of his deputy Prince (Ben Foster), are following them across the Arizona dessert to try to rescue him.

As humble Dan tries to earn his keep and prove his manliness, a battle of wits and wills develops between him and the most feared criminal in the wild west.

Even though it’s a remake of the 1957 film of the same name, this is a welcome reinvention of the modern western.

Rather than featuring too many rival gangs running around shooting each other, spraying the local saloon with bullets – and there is plenty of that going on – this film is really a drama between two men – the humble, war-wounded rancher and the ruthless but captive outlaw.

It’s more about mind-games than gunplay.

Even if the film feels a little slow at times, it’s worth sitting through the lulls to get to the scenes that feature two of the strongest actors working today bouncing powerful and thoughtful, but economical dialogue off each other.

A grudging mutual respect oozes out from beneath the animosity they necessarily have for each other – a respect which grows the more time they spend together and the more of their travelling companions who, for one reason or another, fail to keep up.

There are some worthy supporting performances – particularly from Foster, Fonda and Tudyk (in a change from his usual comedic roles, such as Knocked Up and the upcoming Death At A Funeral).

But the success or otherwise of this film depends entirely on it’s the powerhouse performances of Bale and Crowe and whether you ultimately believe in the way their characters develop, they’ll certainly take you much of the way along their own journey with them.

Towards the end, there are some elements of the plot which don’t really ring true, so to get the most out of it, think of it less as a taut thriller – which it is – and more as a character study.