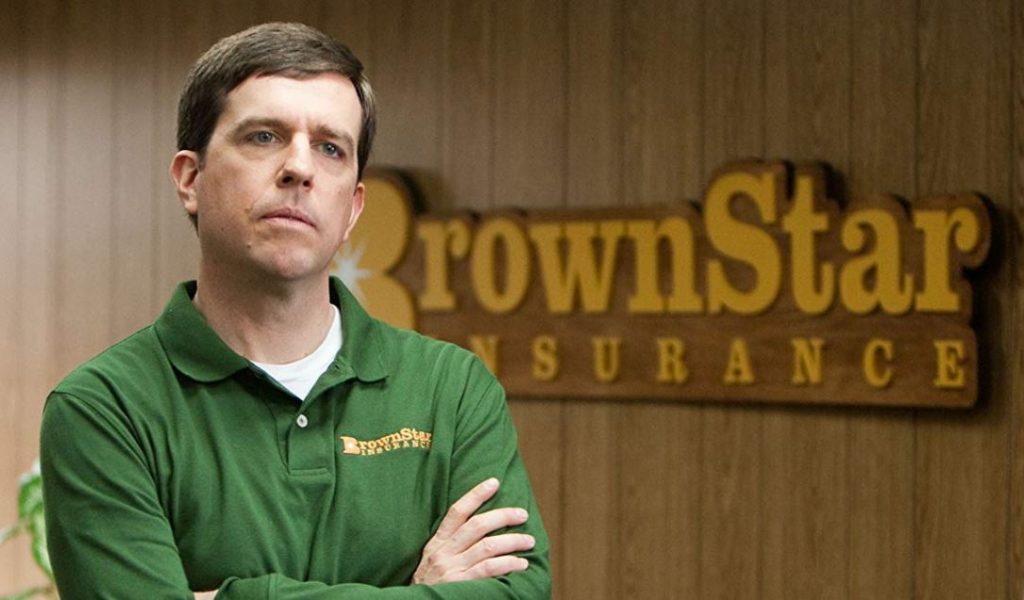 Smalltown insurance salesman Tim Lippe (Ed Helms) is sent by his boss (Stephen Root) to the region’s annual convention at Cedar Rapids, where his firm is up for the prestigious “Two Diamonds” award, that it’s won for the past few years. It’s up to Tim to keep the company’s reputation intact.

To save money in these economically trying times, Tim finds himself sharing a room with his morally dubious nemesis Dean (John C Reilly) and a rather more supportive salesman, not interested in the glories of any awards, Ronald (Isiah Whitlock Jr).

At the first night’s social mixer event, a Cedar Rapids virgin, Tim’s room-mates introduce him to a woman they’ve flirted with for years – Joan (Anne Heche).

Tim’s mission is to impress the organisation’s boss Orin (Kurtwood Smith) but he finds himself impressing Joan too. His good-natured naivety makes a refreshing change for someone who’s become disheartened by years of watching smarmy salesmen schmoozing their way to the top of the business.

As the convention rolls on, their time is filled with talks, seminars, team-building exercises, drinking and late-night skinny-dipping – you know – just what you’d expect for an insurance salesmen’s convention.

Then there’s the back-slapping, back-stabbing and back-handers.

Can Tim hold his nose and swallow the medicine to do what it takes to bring home the trophy, will the optimistic young salesman have his dreams dashed by corrupt practitioners of a morally borderline industry or will the idealist find his own way to restore his faith and ours in insurance sales?

This is a warm-hearted film that pits naivety against cynicism and dishonesty.

From the outside, Cedar Rapids has the air of the rapidly growing genre of dumbed down comedies, but up close, it plays with all the wit and warmth of Miguel Arteta’s earlier films, such as The Good Girl and Youth In Revolt.

The latest US Office-alumnus to break into Hollywood leading roles on the big screen, Ed Helms gives us a thoroughly empathetic protagonist, who’ll take you with him as he battles with his conscience, personally and professionally.

Anne Heche is impressive as a woman enjoying her annual escape from her hum-drum life.

Only John C Reilly’s over-the-top – but no less enjoyable – performance takes the film from the realm of bitter-sweet reality to comic surrealism.

In a neatly cold-hearted cameo, Sigourney Weaver also delivers something we haven’t seen from her before.

There are good guys we like, bad guys we don’t and anti-heroes we know we shouldn’t like but who grow on us.

The story is, in truth, rather pedestrian and formulaic, but there are a handful of surprises along the way, but nothing so extraordinary as to frustrate a mature audience.

Happily and unusually coming in at under an hour and a half, Cedar Rapids is a surprisingly enjoyable, unexpectedly rewarding bitter-sweet comic morality tale, told at a satisfying pace, with delightfully honest – and necessarily dishonest – performances.