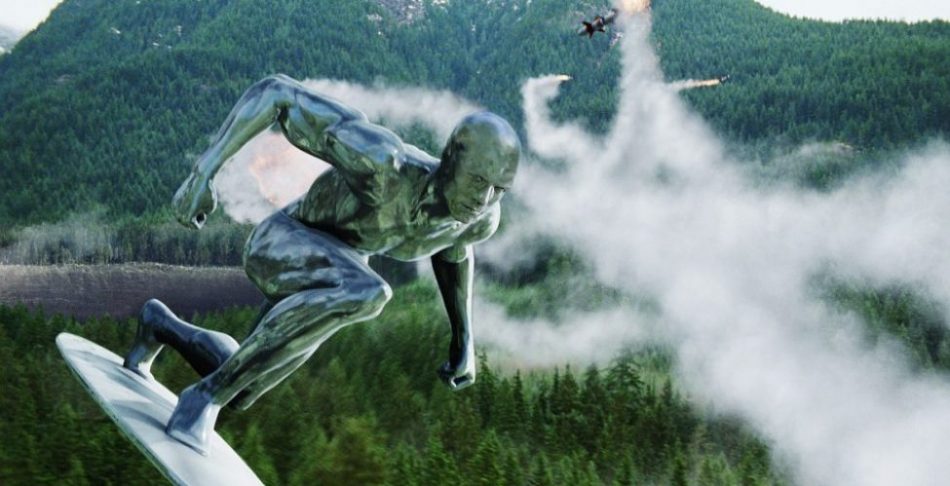 Sue Storm (Jessica Alba) is getting fed up. She wants to marry her fiancé Reed Richards (Ioan Gruffudd) but he keeps finding other things to do, like design sensors for the military to protect the planet from aliens. You know the kind of thing…

When she finally manages to pin him down to a date, for what’s billed as the “wedding of the century” – they are half of the Fantastic Four team of super-heroes, after all – he starts behaving himself and goes through with it – until halfway through the ceremony, one of his sensors goes off and all hell breaks loose. Helicopters crashing into the congregation…you know the kind of thing…

The wedding is aborted. The team pull on their spandex outfits and set off to investigate and overcome the threat to the planet.

The threat turns out to be from the mysterious Silver Surfer – a character who’s not unlike Arnold Schwarzenegger’s molten metallic nemesis from Terminator 2, but on a celestial surf board. He’s basically travelling around the universe, paving the way for a big planet-eating cloud called Galactus, which is heading towards Earth to devour it.

With some help from their super powers – including invisibility and having stretchy arms – and hindrance from a returning former baddie – can they convince the Silver Surfer to call off his boss, save the world and still get married – all within an hour and a half?

From the same stable as the Spider-Man and X-Men comics-to-movies, this is nowhere near as satisfying or imaginative as either.

The main characters are shallow, obvious and largely unsympathetic clichés, who fail to develop – there’s the techno-geek, the techno-widow, the cheeky womaniser…you know the kind of thing…

A lot of the drama is taken out of it by the fact that their super-hero identities are public knowledge. And their powers are almost as nonsensical as the parodies in Mystery Men; being able to put your hand-luggage in an overhead bin on the far side of the plane might raise a cheeky smile, but it ain’t gonna save the world.

There’s also an incoherence in the way the powers are swapped and shared during the course of the film, in a way that suggests the plot wasn’t near the top of the film-makers’ agenda.

The return of the bad guy from the previous film is clumsily handled and will mean nothing to anyone who’s coming to this film fresh.

The eponymous Silver Surfer doesn’t actually do much except just fly around a bit and make a few holes in the ground – and with the real antagonist being a big cloud that our heroes never actually get to meet, you get almost none of the one-on-one combat that adds to the excitement of most superhero films.

It’s a colourful but expensive mess – with lots to offer children but very little to offer adults – other than Jessica Alba in a spandex suit.

But I suppose you shouldn’t expect a superhero movie with a PG certificate to pack much of a punch.