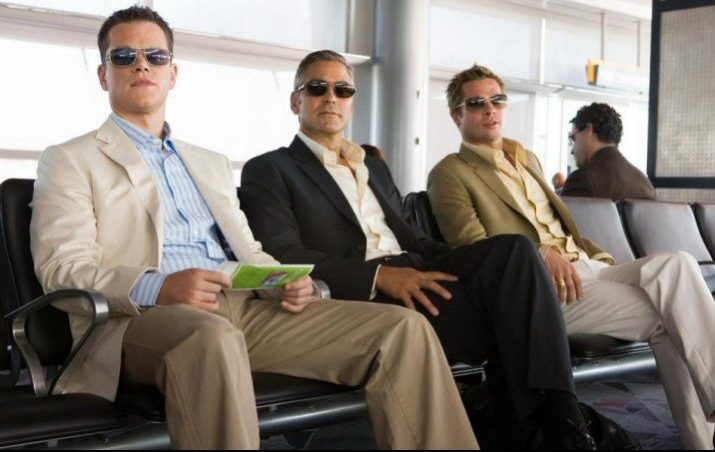 Moneyman Reuben (Elliott Gould) ends up in hospital after he suffers a severe heart attack when he’s cheated by a business partner in a new hotel – Willie Bank (Al Pacino) takes his money but writes him out of the deal.

Unlike the previous outings for Soderbergh’s team of Danny Ocean’s (George Clooney) cronies, the main aim this time is not so much to steal or cheat, but to deprive and more specifically, wreak revenge on Bank for the cruel and ruthless mess he’s left their father-figure in.

Bank is about to open his latest hotel – an eponymous gambling empire on the Vegas Strip.

He needs to make big money on his opening night to keep his financial backers on side – but perhaps more importantly, he’s determined to make it a clean sweep in winning another Five Diamond award for this hotel, in keeping with the success of all his others.

Enter Danny, his right-hand man Rusty (Brad Pitt) and the rest of the team – plus newboy Roman (Eddie Izzard), the king of gambling scams – to sabotage Bank’s attempts to cash in.

From past experience, you might expect another comic crime caper – a big heist movie, but that’s not what Soderbergh’s aiming for this time.

But to describe this as a drama would be unfair, because despite an unexpected moral centre, it’s bursting with the cheeky fun of its predecessors – it’s one of those rare films where the audience has near enough as much fun as the actors clearly had in making it.

And while working to ensure that he gets the coolest performances out of undoubtedly some of the coolest actors in the world (Clooney, Pitt, Damon and Pacino, chief among them), Soderbergh’s cinematography is equally cool, its use of colour bringing to life the lights of Las Vegas as if you were there.

OK, so there’s no doubt that this is not a great film. The plot is at times lazy – even corny.

Apart from a last-minute set piece, it’s less about constructing clever heists than it is about deconstructing the unstoppable success of a ruthless businessman, so while the idea is normally for us to identify with our cheeky anti-heroes and support them as they strive to line their pockets, on this occasion, we’re meant to be rooting for them as they try to destroy a friend’s business rival – the audience just isn’t that engaged.

But it’s fun. You’ll laugh. And you won’t feel cheated. It’s not as enjoyable, clever or mature as Ocean’s Eleven, but it’s more satisfying than Ocean’s Twelve.