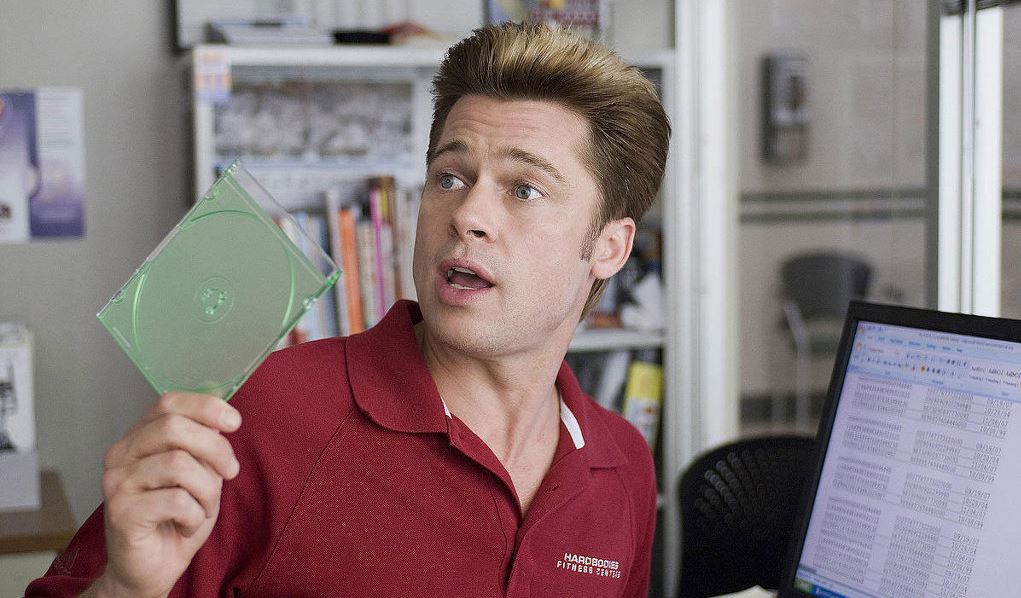 When he gets home and tells his cold-hearted, unfaithful, miserable snob of a wife Katie (Tilda Swinton) that he’s been fired, it’s all she needs to persuade her to call a divorce lawyer.

His first piece of advice: before you say anything to your husband, get all his financial records onto a CD Rom.

When this CD falls out of someone’s handbag at Hardbodies Gym, it ends up in the hands of hyperactive crackpot personal trainer Chad (Brad Pitt) and his middle-aged, insecure and lonely colleague Linda (Frances McDormand). Managing to trace the disc back to Osbourne, Chad assumes the figures on it relate to a top secret CIA project, so – desperate for money to fund an ambitious programme of plastic surgery – Linda persuades Chad to help her blackmail Osbourne.

When their mark refuses to pay up, they set out to find someone else who’ll pay good money for what they believe are national secrets.

All the while, Linda’s time is divided between her dastardly espionage plot and her attempt to find a man through internet dating, with work at the gym hardly getting a look-in, much to the frustration of her besotted boss (Richard Jenkins).

One of her fancymen, smooth and smarmy Harry (George Clooney), seems to be sleeping with pretty-much every woman in the film, which – of course – means he finds himself ending up in all sorts of problems.

With incompetent amateur spies wrong-footing the highest level CIA bosses, the scene is set for a farcical espionage thriller of the Coen-Brothers surreally epic proportions.

Coen Brothers films generally fall into one of two camps – the dark thrillers and dramas (like Blood Simple, Miller’s Crossing and their recent Oscar-winning No Country for Old Men) or the surreal comedies (Raising Arizona, The Big Lebowski, The Hudsucker Proxy) and this lands very much in the second category, with its complex plot, told through a large number of idiosyncratic, terribly flawed but largely likeable misfits.

On the basest level, it doesn’t disappoint. It’s sharp, slightly surreal, bright and bold and – barring the odd death – rather good fun. And as you’d expect, the glittering cast of Oscar-winners and nominees fill the screen with the energy required of them. But with these actors, writers, producers and directors, a film of such provenance sets the bar high for itself, so it needs to excel to live up to expectations.

There are twists and turns galore in this maze of a movie – mostly funny, occasionally shocking – and it’s without question one of those films where the cast are having perhaps too much fun. Although they’re all playing outrageous characters, few of the actors are getting up to much we haven’t seen them do before, because most of them have been in previous Coen brothers films.

While perhaps his is the most enjoyable performance to watch, Pitt’s turn is a little confused – one minute we’re meant to believe he’s the sharpest tool in the box, but the next, he acts like a naïve first-time blackmailer. He plays both roles well – but the two are surely mutually exclusive.

Almost without question though, the unsung hero of the piece is the scene-stealing CIA boss, JK Simmons, who’ll be known to some as the Daily Bugle’s editor in Spiderman. “Report back to me when it makes sense!” he barks to his underlings, with the knowing smirk of a man who’s seen it all before, but still hasn’t got a clue what’s going on, as the surreal plot begins to unwind before his all-seeing CIA eyes.

Ultimately, the film is tremendously enjoyable on most levels, but sadly quite shallow and slight. The humour isn’t biting enough to satirise the murky world of spies or dark enough to explore the obsessive vanity and inherent unhappiness of every one of the protagonists.

It would be almost impossible to dislike this film, but there’s nothing here to admire as there is in the best of the Coens’ work.

They shouldn’t be encouraged to coast downhill in neutral, even if it’s a quick and easy way of getting from A to B.

In that sense, it’s rather lazy, laced with easy laughs – but it’s an unashamed comedy, so it seems rather unfair, perhaps, to analyse it too deeply.