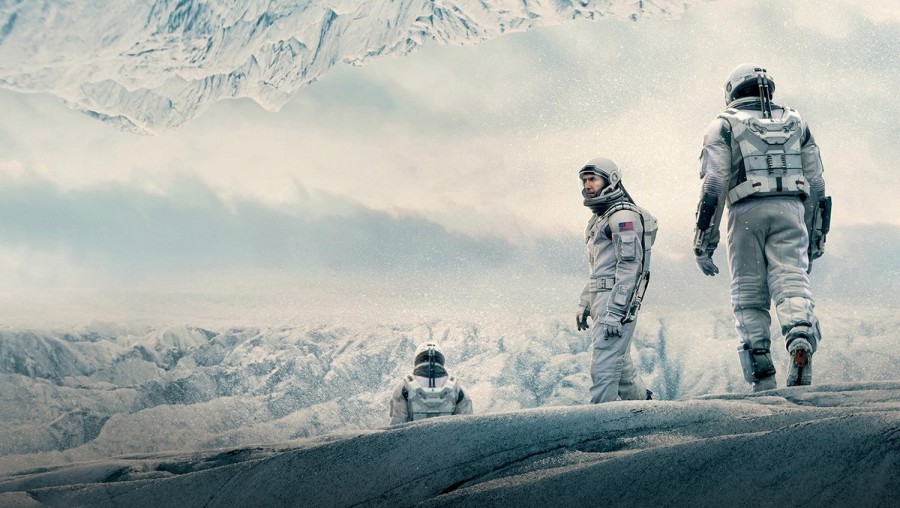 In the not too distant future, the planet is running low on resources. The only industry in town is farming, because food is the only thing that matters now, but severe sand storms are putting most crops at risk.

As an illustration of what’s important in today’s America, Cooper (Matthew McConaughey) is a former astronaut, but the space programme has long since been wound up and he’s now putting his engineering skills to good use to get the most out of his farm.

Cooper’s teenaged son Tom is happy to follow him into farming, but his doting younger daughter Murphy is fascinated by science and wants more than corn to occupy her brain when she grows up.

Cooper’s world is thrown upside down when he finds himself with a new calling; he’s offered the chance to fly again – into the furthest reaches of space, to join a mission to try to find a new planet that could support mankind when Earth no longer can.

But he knows enough about astrophysics to understand that he could return home to find that although he’s only a few years older, many decades could have passed back on Earth.

He’ll miss seeing his children growing up – but it’s a penalty he’s prepared to take to give them a future. But as she grows up, Murphy (Jessica Chastain) doesn’t see it that way.

Gone are the days when science fiction was about aliens coming to earth to steal our resources – now, it’s all about us scouring the universe for other planets to colonise as we mine our own dry.

Fresh from his Oscar win for the small drama Dallas Buyers Club, it’s Matthew McConaughey who’s tasked with saving humanity in a film right at the other end of the Hollywood scale; the most common adjectives used to describe it are “big” and “ambitious” – both of which Interstellar is, of course. But coming from the director behind the most recent Batman films and Inception, what would you expect.

There’s no question that Christopher Nolan has structured a thought-provoking science fiction that likes to think it’s teetering on the brink of science fact. Contemplating green issues from climate change to humanity’s overuse of the planet’s resources, he imagines a time when the UN is no longer urging the population to change its ways to save the Earth – it’s too late for that – but science has advanced far enough, not to save this planet, but to find us another one.

But as well as the ecological and science fiction aspects, at its heart, this film is about how a close relationship with a father and daughter is put to the test by a sense of duty on the father’s part and the daughter being just too young to understand and holding that grudge for decades. He has to choose between his children and everyone else – and the child who’s left behind is bound to take it badly.

It’s a clever, intricately woven plot and the visuals are, as you would expect, stunning – most of the film, and not just the most spectacular space-scapes, is shot in Imax, so forking out that little extra to see it on the biggest screens will draw audiences even further into an already engrossing piece of cinema that, if anything, feels too short at nearly three hours long. That said, it does sometimes feel a little stop-start as periods of introspection are interspersed with well choreographed action sequences.

Choosing not to use the “green screen” techniques adopted by many of his contemporaries, Nolan has set himself an even greater challenge. There are moments where it shows; a space collision in space is nothing like as impressive as a comparable event in last year’s 3D epic Gravity, but this film is less about the thrilling moments than it is about creating a mood, an atmosphere, if you like, that will envelop you.

There are some lazy narrative contrivances, which are particularly frustrating in a film that hits so many right notes, and – ignoring my own advice – having tried to understand what was actually going on, I can state that some of the science doesn’t feel quite right. But with one of the world’s most respected astrophysicists, Kip Thorne, among the consultants and Nolan himself not known for being a slacker, perhaps it’s just me – with a 3rd in my university Relativity paper – not being bright enough to understand. Or, perhaps it’s simply because this is science fiction, not fact.

But it’s not just the odd plot point that invites groans; some of the finer details feel uncomfortably forced, much of the characterisation doesn’t feel believable – while the school staff are irritating, that could be read as satire, but Cooper’s grown up son, portrayed by Casey Affleck, seems to have a death wish, explicable only by Nolan’s need to get Jessica Chastain’s Murphy to return to her childhood home. And Matt Damon and Nolan regular Sir Michael Caine’s appearances could leave you rolling your eyes.

Interstellar is generally more successful when it’s in space than back down on Earth and while it has so much going on that’s worth a look, it’s undoubtedly one of the most entertaining films of the year, it’s certainly too flawed to be described as a masterpiece. And at times, it even feels a little derivative – borrowing visuals and ideas from everything from Close Encounters to Nolan’s own Inception.

It’s not the biggest space film, or the most intimate family drama – neither is the most incisive study of mankind’s effect on his environment – but’s it’s the best film to combine all the elements. So while it might be a bit of a stretch to describe it as “out of this world,” even for those who enjoy epic cinema, regardless of whether it makes sense to them, it’s certainly a good all-rounder.