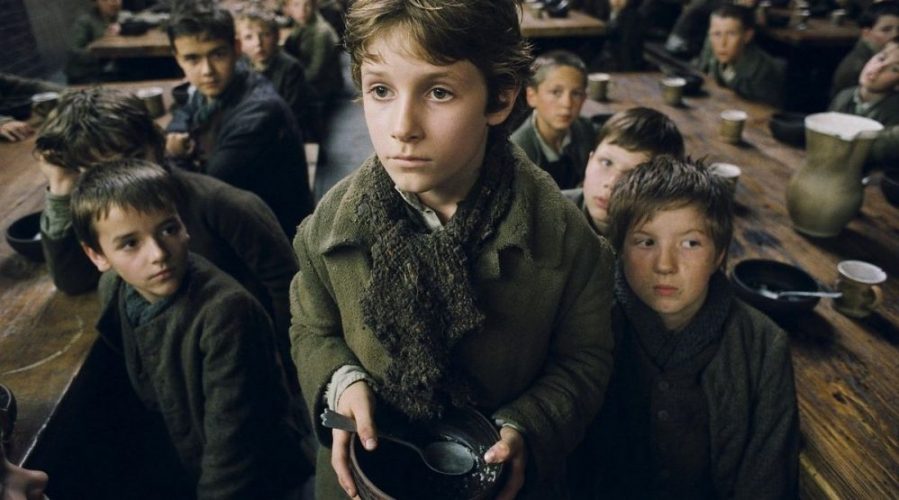 (I hardly need to tell you, but just in case…)

Young orphan Oliver Twist (Barney Clark) is thrown out of the workhouse, where he’s living the bleakest of existences, for having the audacity to ask for a second helping of gruel.

The now immortal request for “more” sees him taken in by an undertaker and his fearsome wife and assistant. Escaping his new nightmare, he wears the soles off his feet, walking for days to reach London.

There, he finds lodgings with the creepy miser, Fagin (Sir Ben Kingsley), who provides food and shelter for a gang of street-urchins who pick-a-pocket-or-two, filling his coffers.

But most of his riches reach him through the most feared and ruthless burglar in town, Bill Sykes (Jamie Foreman).

When the gang take the naïve Oliver out to teach him out to steal handkerchiefs, he’s initially arrested, but then taken in by the kindly Mr Browning. For the first time in his life, Oliver experiences love and comfort, but before he’s even had a chance to enjoy the taste for a moment, Sykes kidnaps him, to stop him spilling the secrets of Fagin’s operation to the police.

But when Sykes coerces the boy into his most serious crime yet, the stakes are raised and with each step, Sykes puts the lives of Oliver – and everyone else who crosses his path – in jeopardy.

For fans of Carol Reed’s Oscar-winning 1968 masterpiece “Oliver!” this film is at the very least a curiosity worth checking out – but beware: the characters won’t be bursting into song around each corner.

With this in mind, it’s hard to imagine how Roman Polanski will stretch it out to more than two hours. It’s a shame he does, as its length is one of its few failings.

Polanski perfectly creates the mood and atmosphere of Dickens’ London, giving us a true sense of the time and place, while the main performances – Oliver, Fagin and Sykes – won’t disappoint viewers who remember Mark Lester, Ron Moody and Oliver Reed in the roles. Sir Ben Kingsley deserves particular praise for defeating the odds by coming close to matching Moody’s light-footed, morally ambigious, loveable rogue – coming close, mind, not matching. And Barney Clark manages to add a sense of savvy to Lester’s naivety.

The difficulty with such a familiar story is that you know where the plot is going, which inevitably takes away some of the drama, so your two hours with Polanski are more a case of “how’s he going to tackle this bit?” than “what’s going to happen next?” but somehow, he still manages to make it nail-biting, although the denouement is sadly a little clumsy.

Within the parameters of Dickens’ novel, Polanski handles the drama with aplomb.

While the film is much darker than its musical predecessor, Polanski manages to generate some moments of light relief from the irony of many of the situations and the hypocrisy of several of the author’s grotesque supporting characters.

Overall though, while it’s a piece of epic period story-telling, you are kind of left wondering why anyone needed to make yet another version of this favourite novel.