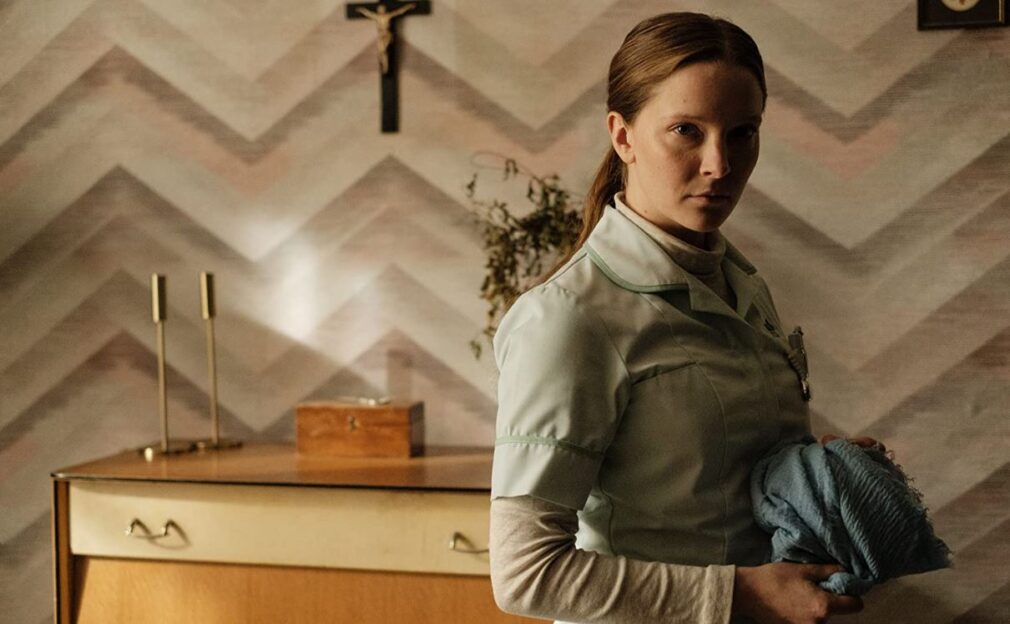 It soon becomes clear that rather than improving Amanda’s life, the pious former nurse is more interested in saving her patient’s soul before her inevitable death.

Lonely in her personal life and harbouring a secret from her past, Maud starts to question her newfound faith when she doesn’t feel that her behaviour – and that of those around her – are properly rewarded – or punished by the divine powers above her.

Rose Glass’s debut is not for everyone – a psychological horror that’s creepy, almost every second from its grisly opening scene to its apocalyptic finale.

With a minimal cast and a handful of timeless locations – only a couple of scenes featuring mobile phones betray its modern-day timeline –  this is a piece of low-budget film-making that puts every penny on screen.

Morfydd Clark – seen most recently in two very different roles in Armando Iannucci’s The Personal History of David Copperfield – is mesmerising in the central role, as we see her trying to make sense of the world, asking God for guidance at every opportunity and keeping him updated on her progress.

Her spartan existence and shameless, fanatical devotion to God contrast sharply with the bohemian lifestyle of her charge, pushing their relationship to breaking point – and beyond.

Earlier in the film, when things seem to be going to plan, much of the menace comes from the music, while later, as her life starts to spiral out of control, a range of traditional horror tropes are rolled out, but in unexpected and highly original ways.

The measured transformation from an unsettling psychological drama into a shameless horror allows time for character development and unsettles the audience by crying wolf, so when the shocks do finally arrive, they are all the more surprising.

There are several big jumps, but unusually for a horror, never when you expect them – and oddly, rarely what you’d expect. And those that you do see coming are still horrific as Glass slowly builds up to – and then drags out – the inevitable shock.

The cinematography is striking but the real reason to try to catch this in the cinema will be to share the jumps with other audience members.

Saint Maud is constantly disturbing psychological thriller that explores depression, faith, loneliness and mental breakdown – not wanting to suggest that everyone who believes in a higher power is insane – but it works equally well, if not better, as a stomach-turning, heart-stopping horror.

Except for the final – very brief shot of the film – Glass appears to be leaving it up to the audience to decide whether something supernatural is afoot or whether it’s all in Maud’s head – at times, Maud seems unsure herself.

There is very little new on screen this days – not referring to the paucity of major film releases – but with few resources, Rose Glass delivers surprises and originality, while exploring themes that most viewers will be able to identify with. It’s a very tough watch – but thoroughly rewarding for genre fans.