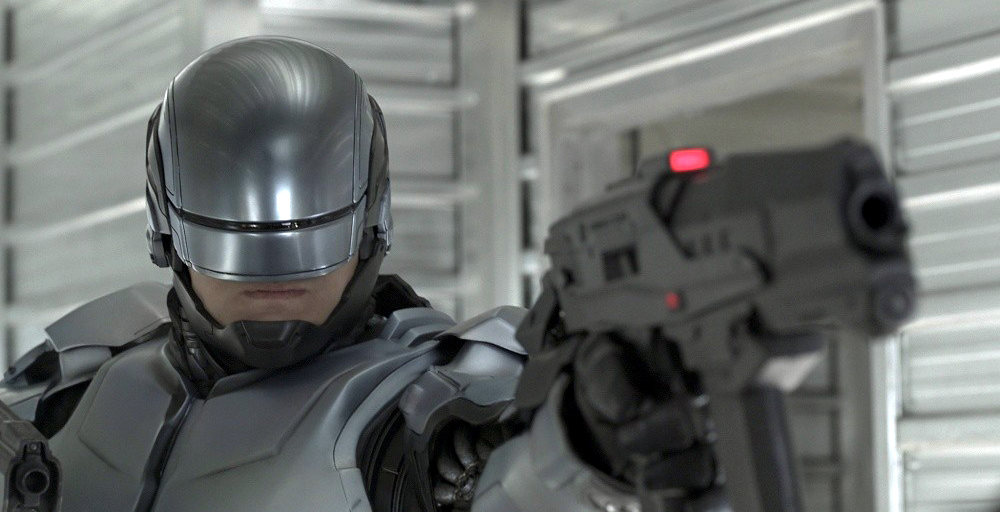 It’s 2028 and Detroit is the crime hotspot of the US. The local technology giant, OmniCorp is trying to persuade the Senate to approve its robot crime fighters, but the politicians are worried that without knowing what it’s like to be human, the robots won’t be able to implement justice fairly.

Seeing the success of OmniCorp’s robotic limbs for amputees, the company’s boss Raymond Sellars (Michael Keaton) sets his chief researcher, Dennett Norton (Gary Oldman) the task of working out a way to combine the efficiency of a robot with the feelings of a human – to create a Robocop.

When Detective Alex Murphy (Joel Kinnaman) is seriously injured by a ruthless gang boss with crooked cops in his pocket, Sellars and Norton persuade his wife (Abbie Cornish) that building a highly armed metal casing to support what’s left of his body is his only chance of survival.

But Norton discovers that the Murphy’s human instincts are hampering his crime-fighting abilities, so Sellars orders him to get Robocop to bypass Murphy’s brain.

After an early display of success, OmniCorp realises that Murphy has managed to bypass the computer and is prioritising the investigation of his own attempted murder over other crimes. Sellars needs to close the programme down before it causes his company any embarrassment. But closing the programme down means killing off a new American hero.

For those who’ve been around a bit, the concept of Robocop will be familiar; a whole generation has passed since Paul Verhoeven first put a wounded Alex Murphy inside an armed exoskeleton and set him loose on Detroit’s criminal underworld. Back in 1987, the violent, dark satire had an 18 certificate, making this reboot’s 12A rating somewhat surprising.

It’s certainly violent – but much of the violence feels like a first-person shooter video game – particularly in a scene where Robocop is put through his paces against a team of pure robots.

Making the switch from TV, the star of the American The Killing, Joel Kinnaman, does the best he can in a part which requires him not to show any emotion, leaving the acting to Michael Keaton and Gary Oldman, who spar delightfully as they argue about the merits of efficiency versus humanity.

But while it looks like the stage is set for a stand off between the ruthless capitalist and the honourable scientist, there’s a degree of inconsistency in Oldman’s doctor, whose initial respectability is inexplicably rejected, when the plot requires him to fall into line and help his boss cheat the system. The stature of Oldman’s character is also challenged – although not by any of his colleagues on screen – by the fact that by going rogue, Robocop has undermined his scientific prowess.

Oddly, for a reboot of a satire that took a sideswipe at the authorities, the politicians are the most liberal characters here – the only ones ultimately insisting that justice should be enforced by police who can empathise with the victims of crime.

Narratively, the film is set up as a chance for Alex Murphy to seek revenge on the bad guy who destroyed his life as he knew it, and when Robocop starts to go rogue, you feel this is indeed where it is going to go, but that turns out to be an almost insignificant plot point, while his real nemisis turns out to be the fatcat who – admittedly selfishly – gave him another lease of life, but as sleazy businessmen go, he’s hardly the most evil bad guy the movies have seen.

But as is so often the case, the antagonist and his minions are the most entertaining characters to watch – the most satirical this film gets is seeing OmniCorp’s marketing executive, played by comic actor Jay Baruchel, persuading his boss to make decisions on how the consequences would play with the public. And it’s always a problem when it’s hard to empathise with the protagonist, which is somewhat counter-intuitive, because the whole premise of the film is initially to create a robot that can empathise with others.

As an action thriller, it’s well made, with impressive effects, slick fight choreography and imaginative production design (he rides a motorbike that looks as exciting as the Dark Knight’s), but the plot feels formulaic and flabby and the script lacks the dark humour that imbued its predecessor. While updated, the music from the original is reflected in the theme and Robocop’s catchphrase – “dead or alive, you’re coming with me” – makes a welcome comeback.