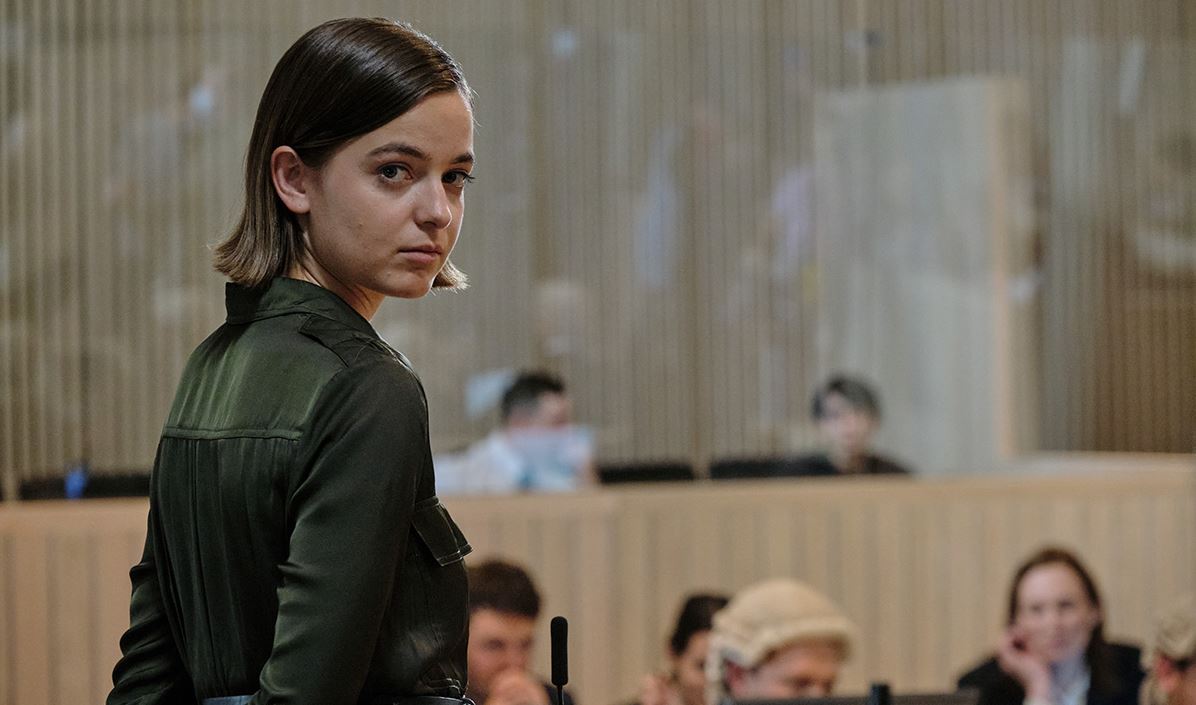 University student Hannah (Abra Thompson) disappears after a college ball where she’s been working as a waitress.

The finger of suspicion also falls on Talitha’s best friend Dhillon (Joseph Payne), who left the ball with her on the night in question.

When Hannah’s body turns up in the river, the billionaire’s daughter and the MP’s son find themselves at the centre of a murder investigation.

Talitha’s lawyer Cleo (Tracy Ifeachor) does her best to try to make the insolent, pompous, belligerent rich-girl sympathetic enough that the jury won’t jump to the immediate conclusion that she must be guilty, while her property developer father (James Frain) has his private detective digging around for anything he can find to get his daughter off.

When police believe they can make the case, Talitha and Dhillon find themselves charged with murder and as this showtrial begins, the only people more damaging to their own future than the prosecution are each other’s legal team.

Coming from the producer of the recent BBC miniseries Bloodlands – and the production company behind Line of Duty, Vigil and Bodyguard – it’s not surprising that Showtrial is a slick drama, riddled with twists and tangents – but it lacks high profile stars – or likeable leads.

A lack of names of the stature of James Nesbitt, Adrian Dunbar or Suranne Jones results in less publicity for the series but can add to the authenticity as you see the characters for who they are. But when the woman at the heart of the story is an intentionally unlikeable character, who may or may not be a murderer, it’s difficult to know what emotional journey we’re meant to be going on.

When the main characters tell the court that they can’t remember what happened because they were under the influence of too many substances to mention, it’s really the lawyers and the jurors you identify with more than those at the heart of the story..

There’s less of a question of who did it than there is of whether the jury will be swayed by the facts or the public perception of the suspects.

For a five-part drama called Showtrial, it shouldn’t take until episode 4 for the trial to begin – that’s not to take away from the police procedural of the first three episodes, as they gather evidence and try to persuade prosecutors that they have a case.

It’s perhaps the procedure where Showtrial is at its strongest; it’s nothing new to watch the tussles between the police and their suspects, the lawyers and the police or between the prosecutors and the suspects across the courtroom – but it’s less common to see the prosecutors getting so involved in the investigation, which gives this series a freshness that could otherwise be lacking.

There’s never really much of a surprise about how it turns out, but it’s interesting to watch as people increasingly removed from the murder are drawn into the sprawling narrative.

There are areas where the writers don’t have the courage of their convictions, as it looks like there’ll be a commentary on class warfare, with two toffs accused of killing a working class waitress but then Talitha ends up with a legal aid lawyer and her ruthless businessman father and Dhillon’s establishment mother turn out to be among the most empathetic characters in the story.

But ultimately, compelling as it is as a piece of drama, and informative as it is, getting under the bonnet of the  judicial process, the characters who most tug on the heart-strings are too far removed from the main narrative to leave you feeling particularly moved about what happens to anyone except the mother of the murder victim, while Hannah herself is more of a maguffin than a human being.