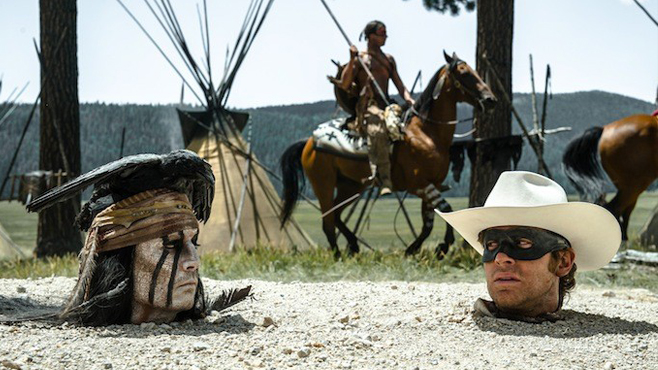 It’s the late 1800s and the West is as Wild as you’ve ever seen it. Corrupt businessmen are taking land from the Native Americans to build a new railway, while the cowboys are doing a good enough job of killing each other.

On the same train are a couple of criminals, on their way to serve their sentences; a ruthless outlaw Butch Cavendish (William Fichtner) and a Native American warrior, Tonto (Johnny Depp).

When Butch’s gang breaks him free, John and Tonto end up joining Dan and his deputies to try to track him down and bring him back. But Butch’s gang get the better of them and leave them for dead as they make their escape. But against the odds, John and Tonto survive to live another day.

With the gang believing John to be dead, he dons a mask and adopts a new identity – the Lone Ranger – as he and his new sidekick Tonto try to restore justice; for John, it’s about bringing Butch and his gang to justice for murdering his brother and his fellow rangers – but the wrongs Tonto wants to right go way back.

Their different goals put their relationship under strain, but they both realise that they can fight for justice better together than alone.

Whatever anyone says about this film, it arrives already branded as the biggest flop of the year, which while financially true is somewhat unfair.

The way the film came together is clearly unconventional – for a film called The Lone Ranger, you’d expect a big star in the main role with a modest name as his side-kick, but with Johnny Depp’s Tonto clearly in the driving seat, both commercially and narratively, and Armie Hammer not having enough of a spark to steal the limelight, it would have made more sense just to call this film Tonto.

Furthermore, Gore Verbinski gratuitously tells his story from the point of view of an ageing Tonto, some decades later, recounting how the crime-fighting pair came together, to a young boy at a funfair. Goodness knows why Hollywood can’t just tell a straight story and seems determined to tell so many of its stories in flashback. Sometimes, this technique is warranted, but here, it’s a tired conceit that adds nothing.

It struggles a little with getting the mood right too, being not quite clear whether it should be playing for laughs or taking the action seriously. Having one comic character in a largely dark action film makes it feel a little uneven.

Having said that, this film has everything you need for a traditional Sunday afternoon Western, from shoot-em-ups involving outlaws, determined native Americans, corrupt businessmen, roof-top chases on speeding trains. In parts, it’s a rip-roaring adventure, with good seeking to triumph over bad. It’s not in any sense fresh or original, but it’s not claiming to be. It’s fun, action-packed, well-choreographed and good-humoured. What’s not to like? As the famous theme tune rears up towards the end, anyone with any fond recollections of The Lone Ranger’s earlier incarnations will be able to sit back comfortably in their seats, content that they’ve had a good time.

The film’s biggest problem was the budget. At a cost estimated at nearly a quarter of a billion dollars, it was always going to struggle to make that back. Most of the bad press has stemmed from this – the producer Jerry Bruckheimer has accused critics of “reviewing the budget, not the film” – and clearly it doesn’t help matters if a film is tainted with such reports. People just hear it’s had bad press and steer clear, but if the same film had been made for $100 million, it would have comfortably received three stars from most critics.

Spending too much is undoubtedly hugely problematic and Verbinski and Depp and Co. should be embarrassed about this, and they could presumably have shaved considerable amounts off the budget if they’d have cut the unnecessary two and a half hour running time, but it seems unfair to condemn a perfectly unassuming and entertaining film to the notoriety of John Carter, when by no criteria is it actually a bad film.