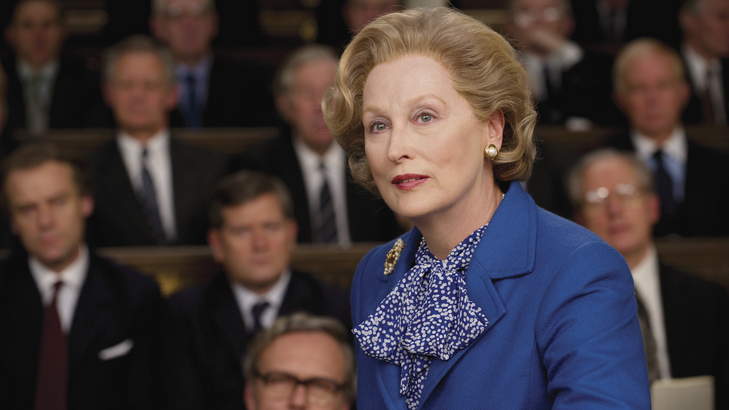 An elderly woman with dementia, who’s losing her grip on the present, finds herself increasingly living in the past.

Recalling some key events from her younger days, she reminisces with her husband – a husband who died several years earlier, but living in the past, as she is, for her, he’s still there. And without him, she’s lonely.

The story is not uncommon, except that in this story, the elderly woman is none other than Lady Thatcher (Meryl Streep) – Britain’s first female Prime Minister and, love her or hate her, one of the most formidable politicians of her generation.

Time and age have reduced this political giant to an old lady whose days are filled with little more than memories.

The political biopic is not a new idea, but this is certainly a fresh approach, which in this case, isn’t necessarily a good thing.

Rather than examining what drove a grocer’s daughter from an East Midlands town to head the government of one of the world’s leading political, economic and military powers, and cataloging the bitterness and rivalries that led to her downfall, the director of Mamma Mia delivers a rather sad study of how ageing strips you of your dignity and how the past consumes the present.

Meryl Streep‘s portrayal of Margaret Thatcher is impeccable, but a movie needs to be more than just watching a good impressionist. The Queen worked not because Michael Sheen made a good Tony Blair. The Iron Lady doesn’t take the viewer on an emotional journey – it follows a woman, in her declining years, as she takes herself down memory lane with a rather scatter-gun approach. A number of disjointed moments from her past which don’t hang together and bear little relation to the modern-day images that link them don’t make for a gripping and rewarding drama.

It’s fun to match the familiar faces – such as Anthony Head and Richard E Grant – with the political grandees they play, but there’s little sense of the building rivalries that made British history play out the way it did. In one flashback, Mrs Thatcher is a remarkable woman honorably leading her cabinet and country, and in the next, she’s a megalomaniac, alienating all before her and apart from the suggestion that a woman had to be strong to get anywhere, there’s little sense of continuity or coherence in her story.

There’s a sense in which The Iron Lady could have done for Margaret Thatcher what W did for George Bush junior – the both chart the political careers of controversial figures, using familiar faces to fill out the political background, but W told a story –

The Iron Lady presents us with windows into her past. Clearly, viewed from later in her life and with dementia creeping in, the structure gives us a better idea of what our protagonist is going through now, but that’s not tremendously exciting for a feature film. What’s more worthy of its position on the big screen – the rise to power of Britain’s first woman prime minister and how she shaped her country for decades to come – or the story of an elderly woman, shuffling around in her slippers, taking tea with sycophantic admirers.

Like W, this film doesn’t cast a critical eye over the actions of its protagonist. This could be wise, because criticising her would mean few of her supporters would want to see it and praising her would ensure that her opponents don’t grace the cinema.

But it also makes it feel rather limp – it has oddly little to say for a film about such a key figure in modern British history.

And where it does attempt to portray some key events, rather too much cinematic licence has been taken to make them feel genuine.

The Iron Lady was famously “not for turning” – and however pitch perfect a performance that is already deservedly receiving awards-season recognition, Meryl Streep can’t turn this into a compelling or meaningful piece of cinema.