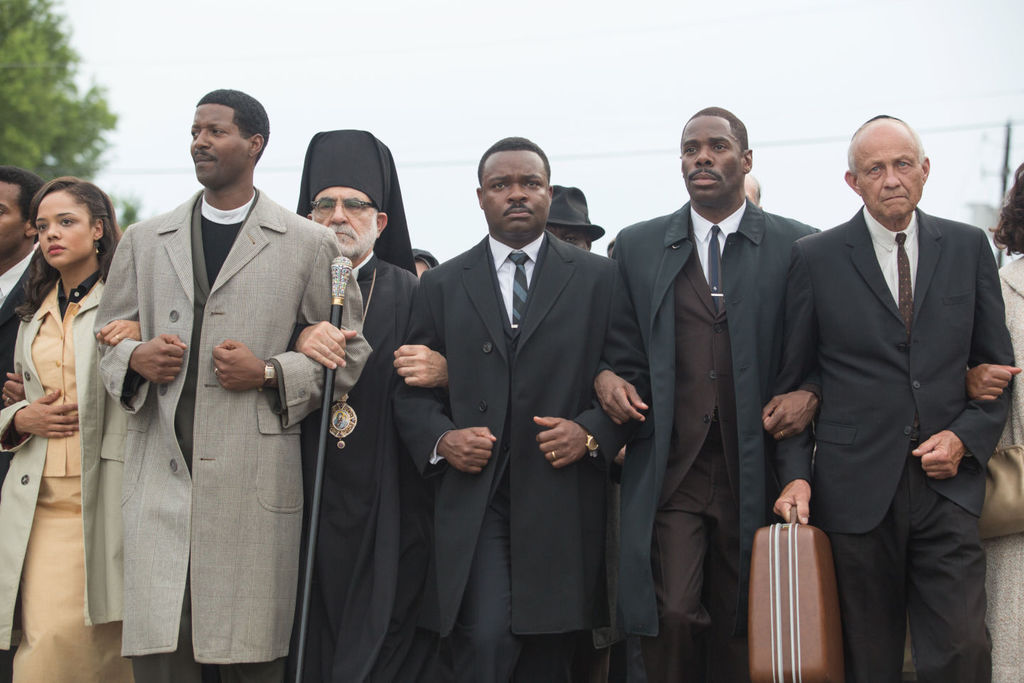 By 1965, America’s civil rights movement, led by Martin Luther King Jr (David Oyelowo), has already made some headway. Segregation has been outlawed – although southern states have been slow to implement the changes. King has been honoured with a Nobel Peace Prize for his efforts and even has the ear of President Johnson (Tom Wilkinson).

But when the President tells King that he has too much on his plate at the moment to prioritise giving black people the vote, King gives his backing to a high profile civil rights march from the town of Selma, Alabama to the state capital Montgomery, more than fifty miles away.

At the first attempt, before the marchers even leave Selma, they’re brutally beaten back by local police on the orders of the state governor George Wallace (Tim Roth). By the time they try again, King himself is leading the march.

Will pressure from King and his fellow non-violent activists persuade – or even shame – America’s white leaders to do the right thing?

History tells us what happened next. It’s not spoiling the plot to point out that there’s a black family living in the White House – or indeed to suggest that there wouldn’t be much point in making a film about a loser. So this film never plays as a drama, but as a history lesson – which is always problematic, because writers and directors have been known to tinker with reality.

But you can’t tinker with emotions – and seeing on screen what is known to be true – white police beating elderly black women for no reason, or shooting unarmed black teenagers – will fill anyone without a Ku Klux Klan membership card with rage. It’s astonishing to be presented with even a Hollywood version of how black people were treated by authorities they could not democratically influence. Watching powerful white men shamelessly conspiring to keep the black men down is similarly shocking, At times, you can almost imagine the audience in the cinema will want to get up and march themselves.

Starting the film with King accepting the Nobel Peace Prize, you get a sense that we’ve missed out on much of the story, but in time-honoured fashion, it’s often a challenge for film-makers to decide which period of a remarkable life would best make a biopic. Martin Luther King being a surprisingly rare presence on the big screen gave the team behind Selma a wealth of stories to choose from. Perhaps limited by copyright issues surrounding his most famous speeches – King’s family has signed the rights over to Steven Spielberg, who hasn’t yet committed them to cinema – this film begins after the most famous ones and has to rewrite later ones to give the same sense of purpose and character – a writing feat that deserves recognition.

One of the most controversial discussion points about this film is it’s relative lack of recognition from the film industry’s annual back-slapping exercise; it’s not just the screenplay that failed to secure an Oscar nomination, but there was nothing for director Ava DuVernay or the British lead actor David Oyelowo either. His outsider’s portrayal of perhaps the most iconic figure in the American civil rights movement is magnetic, but the question never addressed by people who say he was unfairly overlooked is whose nomination he should have had.

DuVernay is a less controversial omission from the shortlists, as the direction, while competent, is somewhat simplistic – linear story-telling, using archetypal characters, bending some directorial rules for little effect and tying up loose ends with a handful of captions, which aren’t entirely coherent.

Selma is film that presents a significant part of an important story, but its success comes more from a strong central performance and the emotions it engenders in the audience than from particularly skillful film-making. And it would be almost impossible to tell this uplifting story of a black messiah without going on a journey from anger at injustice, through frustration and disappointment to elation and hope. The hope, of course, would still take several decades to reach fruition…if it even has…

…perhaps the most interesting element of Selma is the context in which it’s being released; six years into Barack Obama’s presidency and unarmed black teenagers are still being shot dead by white police officers. Segregation is long since a thing of the past, black people not only have the vote, but are being voted into office, yet the story on the streets – in many ways – has not changed. Some argued that Margaret Thatcher was able to become the UK’s first female prime minister only by acting like a man. But it’s harder to argue that President Obama has had to think like a white man to reach the highest office in his land. Is the one true lesson to be learned from the civil rights movement that you can’t legislate to change people’s feelings.