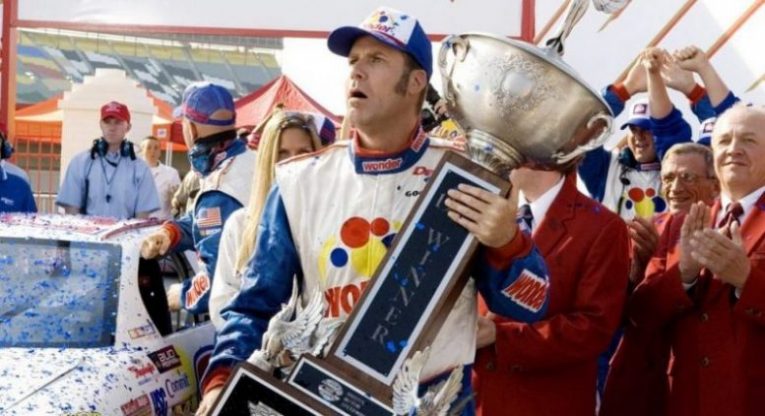 Ever since he was a young kid, Ricky Bobby (Will Ferrell) has wanted only one thing – “to go fast.”

When he’s working in the pit-crew of a Nascar team and the driver goes awol, he gets his chance.

Soon, Ricky and his best friend Cal (John C Reilly) become the undisputed stars of the sport, earning riches beyond their wildest dreams.

To spice up the championship, the smarmy boss (Greg Germann) flies in the French Formula One driver Jacques Girard (Sacha Baron Cohen), who gives Ricky more than a match for his money.

Soon, Ricky’s empire starts crumbling around him. He has to rekindle a long-lost relationship with his father to set him back on the road to recovery and riches.

OK, so the plot sounds a bit familiar and formulaic – somewhat twee and lacking in originality. But this film isn’t about the story – it’s just a hundred and eight minutes of sheer, unadulterated silliness.

Rarely have I seen a film that’s bursting with so much fun.

No matter how fatuous the story or the characters – from Ferrell’s deliciously supercilious and self-important buffoon, through Reilly’s naïve ignoramus to Baron Cohen’s slimey Frenchman and Gary Cole’s redneck role as Ricky’s father – the unrepentant childish gags, both visual and verbal, keep on coming.

Most of the time, it’s so silly that the humour isn’t even close to being clever, but you can’t help but laugh.

If you like the kind of comedy churned out by the likes of Ferrell, Ben Stiller, Owen Wilson, Steve Carell, you’ll leave the cinema with aching sides and sore jowls, even if you feel ashamed to admit it to anyone.

It’s not big and it’s not clever, but it’s fast and it’s furious and it’s funnier than it has any right to be.