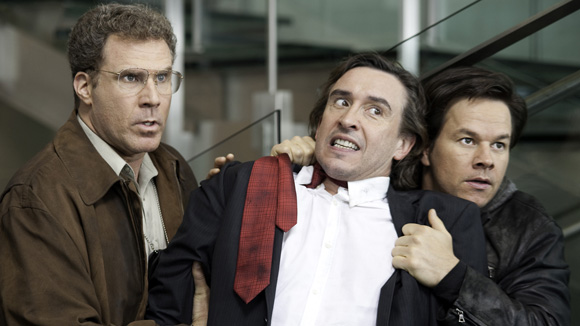 Highsmith (Samuel L Jackson) and Danson (Dwayne Johnson) are the kind of fast-talking, stunt-driving, gun-toting, obscenity-shouting hero cops so beloved of action films. But this movie isn’t about them; as its title suggests, it’s about ‘the other guys’ – such as the meek-and-mild paper-pushing desk-jockey Allen Gamble (Will Ferrell) and the ambitious but invisible upstart Terry Hoitz (Mark Wahlberg), who’s unlucky enough to happen to share a desk with Gamble.
When an accident puts Highsmith and Danson out of the picture, all the other cops start battling each other to take over the spotlight.
Hoitz’s career has been held back by an accidental shooting some years earlier that forced the retirement of a leading baseball star. Gamble has never had any desire to get out of the office. But without Highsmith and Danson, someone in the department is going to have to step up and catch a slimey British financial adviser David Ershon (Steve Coogan), who’ll stop at nothing to recoup the millions of dollars of his client’s money he’s just lost.
Captain Mauch (Michael Keaton) can’t devote his full attention to the job in hand, because he always has to dash off to his second job – a manager at a local home-wares store – to earn enough to put his bisexual son through college to become a DJ.
Keen as Hoitz is to get his big break, he finds it equally hard to concentrate on Ershon – particularly whenever geeky Gamble’s inexplicably gorgeous surgeon wife Sheila (Eva Mendes) is around.
Gamble is the only one who seems at all interested in Ershon’s misdemeanours, but he’s less interested in his financial dealings than his failure to get the correct scaffolding permits for a construction project he’s involved in.

OK – so there doesn’t seem to be too much plot going on here – from that description, one might come to the conclusion that this is more about the characters – and one would be right.
On one level, it’s an odd-couple buddy movie – with unlikely partners pulling together in adversity, to stop the other cops holding them back. On another, the film-makers will argue it’s a satire on corporate greed – but for most of the film, this rather washes over you. It’s not until we’re presented with a barrage of facts and figures about bankers’ bonuses over a crunching Rage Against the Machine track alongside the closing credits that any kind of anger towards the financial crisis becomes apparent, making this more of a satire with an odd aftertaste rather than one with true bite.
But it very much plays as a comedy, rather than a satire – and on that level, it hits the mark, time and time again – as long as you’re into the Ferrell brand. The gags – by turns silly and clever, visual and cerebral – work tremendously, almost without exception.
The characters are all so beautifully drawn and warmly presented that you’ll be rooting for Ferrell and Wahlberg from the start – Ferrell’s naivety and Wahlberg’s sensitivity and pained disbelief deliver a perfectly plausible pairing of two memorable comic characters. And Keaton’s comfortable confidence and breeziness make him one of the more entertaining and likeable captains in recent cinema.
This is unquestionably Ferrell’s film – having worked with McKay in films from Anchorman to Talladega Nights, he’s clearly given free reign to do and say whatever he wants, but he judges it just right each time.
Wahlberg’s comic timing, too, was unexpectedly tight.
Whether it’s running gags – such as Ferrell’s confiscated gun and Keaton’s inadvertent penchant for incorporating lyrics from TLC songs into his vernacular – or the subtle one-liners that appear to come out of nowhere, you’ll find yourself increasingly laughing out aloud – with it, not at it.
But once the surreal ground-work has been laid and it tries to bring in more plot, The Other Guys gets dangerously close to becoming the kind of police actioner that it’s parodying, but it’s such good-hearted fun, that can be forgiven.
To borrow a quote from Hoitz, this film is a peacock and should be allowed to fly.

CLICK HERE TO WATCH THE OTHER GUYS ON AMAZON PRIME

CLICK HERE TO BUY THE OTHER GUYS ON AMAZON