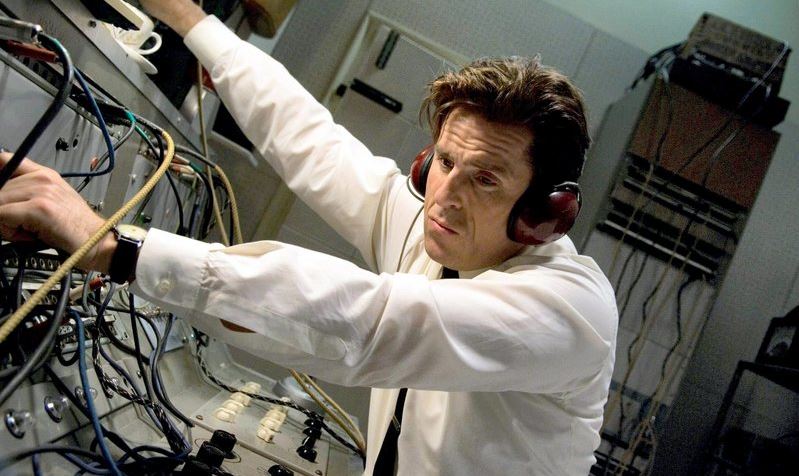 Back in the early 1960s, before real British pop music took off, there was one record producer working hard to make his mark.

In his flat, above a shop on the Holloway Road in north London, Joe Meek (Con O’Neill) was recording musicians in living room, while he flipped switches in a bedroom down the corridor.

A succession of musicians popped upstairs to audition as he built up a company to help him achieve his dream.

Drummers and keyboard players – while important to the sound – didn’t really interest Joe Meek – it was finding a pretty-boy front-man that drove him.

So when tall and self-confident Heinz (JJ Feild) walks in, Joe falls head over heels for him and pushes everyone else aside to make Heinz a star.

After a number of hits – including the eponymous Telstar – the pressures of fame weigh heavy on Meek and his musicians – until his world starts to fall apart in the most tragic of ways.

Drugs, paranoia, jealousy, fear of failure – and failure itself – get thrown into the mix as Britain’s Phil Spector ends up emulating his stateside contemporary in more ways than one.

This passion project from Lock Stock actor Nick Moran is lifted from the stage-play he directed about the same iconic character. I apologise, at this stage, for referring to the director as the “Lock Stock actor” as this project is clearly an attempt to shake off that label – it might persuade people that he’s trustworthy behind the camera, but it doesn’t have enough weight to propel him to the top of any directing lists just yet.

The film is a fascinating insight into a character that many will know of – but not about. It’s an effective portrayal of how a blinkered megalomaniac artist believes he can do no wrong – and then can’t accept a world in which it turns out he can.

His life – assuming this biopic is to be believed – followed the path of many an entertainer – fighting against the odds for success, putting himself out for someone he loves, being betrayed by that person and then suffering a tragic decline.

There is much about the character that is to be admired – his drive and ambition – his undoubted talent and determination – there is much to be mocked – including his rejecting of a new band from Liverpool – you guessed it.

But this is one of many signs that perhaps he wasn’t as great or influential figure as he thought he was – or indeed as the film-makers think he was, however interesting or traffic his life was.

This rather makes the film feel a little small-time and parochial, but the biggest weakness of the film – through no fault of the film-makers – is that Joe Meek appears to have been rather selfish, rude and arrogant. He certainly wasn’t very loveable, which makes it hard to care about him or root for him when things stop going his way.

Con O’Neill delivers a powerful performance in the central role – a supporting turn from Kevin Spacey is tremendous fun too. But most of the other characters are too insignificant for the actors playing them – including TV comic talents such as James Corden and Ralf Little – to make much of an impact.

Perhaps the most entertaining part of the film, though, is the end credit sequence which puts some of the musicians we’ve spent the past hour and a half with in context – Billy Fury and Gene Vincent most viewers will know, but who’d have thought that Ralf Little’s Chas Hodges would go on to find stardom with his mate Dave?