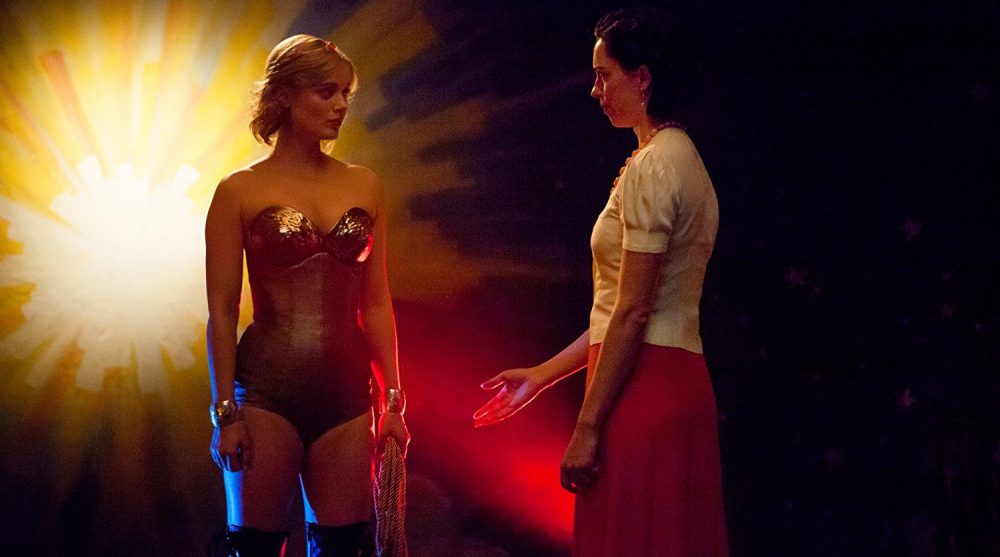 In 1928, psychology professor William Marston (Luke Evans) takes on a teaching position at Harvard University – and the associated ladies’ college Radford. His wife Elizabeth (Rebecca Hall) teaches alongside him, but without the acclaim or respect accorded to her husband.

The pair take on one of their students, Olive Byrne (Bella Heathcote), as a teaching assistant and the three work together on developing the first lie-detector machine and on refining William’s DISC Theory on human behaviour.

The beautiful young Olive is engaged to be married, but it’s soon clear that William has designs on her – and after initial resistance, she shows an interest in him. And in Elizabeth.

Before long, Olive has left her fiance and moved in with the Marstons. Their living arrangement doesn’t go down well with the university and they’re thrown off the campus. But they are determined to continue with their polyamorous relationship, with both women bearing children and a story being concocted to satisfy the neighbours.

A chance encounter with a fetish-shop owner inspires William to devise a comic-strip, centred on a super-heroine, whose behaviour helps him explain his DISC Theory.

William’s Wonder Woman comic quickly becomes a huge success, but their joy is short-lived, as the truth about their living arrangements soon emerges and a censorship organisation accuses William of using the comic strip of promoting sadomasochism and spreading lesbian propaganda.

As far as “real life stories” go, this is certainly a unusual one – a respected psychology professor gets involved in a polyamorous relationship with two women who help him invent the lie detector machine and inspire the creation of the best-known female super-hero.

But surviving relatives of the real-life protagonists have taken issue with some elements of the story – chiefly the nature of the relationship between the two women – which makes it just a little harder to accept the otherwise extraordinary story.

The film shows a group of people – in love – battling prejudice both in the workplace and in their neighbourhood and it’s easy to feel sympathy with them, not least because while other forms of lifestyle that were shunned in the early twentieth century – such as same-sex relationships – are now very much accepted in most quarters, there are still very few people who wouldn’t regard such a menage-a-trois with a little scepticism, three generations later.

It very much makes you want to scream “what difference does it make to you if that’s how they choose to live?”

But this isn’t a film about love rights – or indeed any kind of civil rights. The disapproval of their peers and neighbours is almost a side-issue, as the screenplay concentrates more on their academic endeavours – first through their lectures, then through the lie detector and finally through – thanks to a somewhat unexpected dog-leg of a turn – Wonder Woman, making this – in unconventional terms – an origin film, of sorts, for the character most recently seen on the big screen in her own eponymous blockbuster and about to return in next week’s Justice League.

The film spends rather too much of its running time on a downer, with even their successes thrown back in their faces – the narrative itself is framed as a series of flashbacks during William’s interrogation by censors who have ordered all copies of his comics to be burnt, drawing comparisons to the Nazis’ rejection of western literature, only a few years earlier.

Much of the plot unfolds rather clumsily, as if there are certain beats that had to be hit, regardless of the pacing of the story.

The three key performances were warm and genuine but their predicament and their action – particularly in the light of the era – make it a little hard to have enough sympathy for them. There’s also a sense in which most viewers might think Professor Marston himself might have had an easier – if less noteworthy – life if he’d been a little more responsible in his personal life.

The idea of a comic strip being the best way to explain his theory on human behaviour to the masses is cute but it feels like it comes a little out of nowhere and a little too late. And a study of a so-called liberal democracy that views his psychological theories as perverted propaganda also provides a fascinating insight into censorship, but this is shown only as an expositional interrogation rather than allowing the viewers to experience the supposed shock of the masses.