The distributors Entertainment One have been good enough to offer our UK readers (sorry foreign visitors) some goodies to coincide with the upcoming release of Elvis & Nixon, as the name would suggest, the rather surprising, purportedly true story of how The King met a President.

With Michael Shannon as the gun-toting rock-and-roll star and Kevin Spacey as the President, more famous for his downfall a couple of years ahead, director Liza Johnson delivers an unexpectedly sharp, funny and zippy supposedly real-life tale of absurdity which would have been surreal beyond measure for everyone involved – except for The King himself. 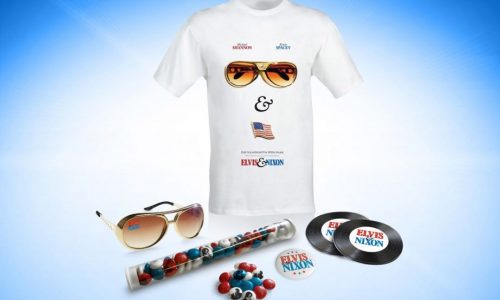 To win a T-shirt, a pair of Elvis sunglasses and some Elvis & Nixon M&Ms, among other goodies, all you have to do is send What’s Worth Seeing a private message through our facebook page (click here) with the answer to this question:

Michael Shannon and Kevin Spacey have both played villains in different reboots of the same Hollywood franchise.

Elvis & Nixon is released in the UK on Friday 24th June 2016. We’ll announce the winners that weekend.

The winners, who knew that both Michael Shannon and Kevin Spacey had played villains in Superman films, were: