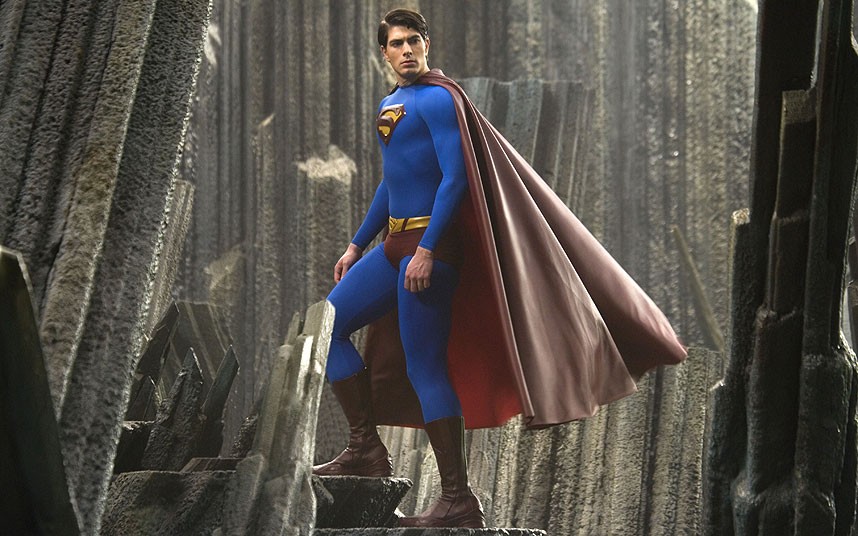 Five years after Superman went (Brandon Routh) off to “find himself” in the ruins of his home planet Krypton, he returns to an Earth in need of a hero.
Whether it’s jumbo jets, laden with reporters including his beloved Lois Lane (Kate Bosworth), tumbling inexorably to earth, or megalomaniacal criminal masterminds like Lex Luthor (Kevin Spacey), plotting to eliminate the entire USA and replace it with his own continent, this is a world that simply can’t cope without the “man of steel.”
But as his alter-ego – the mild-mannered Daily Planet reporter Clark Kent – he’s rather disappointed to have returned to find that not only does Lois Lane have a fiancé, but she’s also got a son, both of whom, obviously, get held captive, ultimately bringing Superman closer to both his nemesis and the kryptonite that could kill him and – oh – forget about the story – just soak up the pure, super hero experience.

Anyone who grew up with the Christopher Reeve films will find themselves yapping with childish glee as they sit in the cinema, hearing John Williams’ Superman Theme welling up at the start of this film.
You’ll be taken back to the magical moment you first saw the man from Krypton fly through the sky to save the planet from this, that and the other.
After a number of incarnations – through TV’s New Adventures and Smallville – Brandon Routh was clearly cast for his similarity, both in looks and voice, to Reeve, and he does about as well as could be expected, living up to the man whose name will forever be synonymous with the role.
As Lex Luthor, Spacey is also suitably slimy – and certainly lives up to Gene Hackman’s sadistic selfishness.
But from here, things start getting disappointing.
The story is in many ways derivative (Luthor planning a land-grab, as he does in “number 1”) and incoherent – Superman’s use of his powers when he’s near kryptonite, for example, and it’s one thing for no-one to notice that you never see Clark Kent and Superman at the same time – another entirely, when they both disappear for five years and then reappear at the same time!
But there are also problems with the characterisation – we hardly see any of Clark at all and when we do, Lois seems oddly antagonistic towards him, so there’s no danger of the sexual chemistry we once enjoyed between them – something not helped by the fact that she now has a fiancé. This just makes her continued flirting with Superman almost worse, as it dangles the promise of infidelity in front of an audience who signed up for pure righteousness.
There’s not even a platonic friendship between the pair – something which, in previous films, gave rise to much humour – this film has very little – from either character or plot. It takes itself much more seriously than its predecessors.
Kate Bosworth is also a disappointing Lois Lane, lacking any likeability.
And there’s little true heroism – at one stage Superman nearly dies (of course), but it doesn’t happen while he’s trying to save the world – he’s just trying to get rid of some kryptonite – he’s trying to save himself.
So it lacks the humour and the heroism, the character chemistry and the coherence of its predecessors, and it’s layered with biblical allegory, with Marlon Brando’s unearthly figure sending his only son to earth to save us – one of the many elements of post-9-11 pap.
But the effects are undeniably impressive – the direction is sharp, honest and faithful – and the excitement of having him back – both for us and the characters in the film, means that in conclusion, you can’t help but feel that a world with Superman is a better world – so just sit back and let the Superman theme wash over you and take you back to your childhood.
It’s not a complete success but it’s certainly not a failure. It’s not a super film but it’s very watchable.

The film is screening at the Imax in London, which doesn’t just mean big, it also means 3D.
There are four sequences, totaling twenty minutes of the film’s long running time, where you’ll be prompted to pop on your goggles to see the young Clark Kent bounding out of the screen and shards of kryptonite erupting out of the sea bed.
The technology is developing, but they haven’t quite cracked it yet. Here, it’s more of a distraction, as in some scenes, the image isn’t quite sharp enough and in others, it seems to detract from an otherwise impressive action scene. It never adds to the story or the experience.
If you’re thinking “Where did I put my goggles?” you’re not immersed in the film.
Worthwhile 3D Imax cinema is undoubtedly on its way, but it’s not here yet.