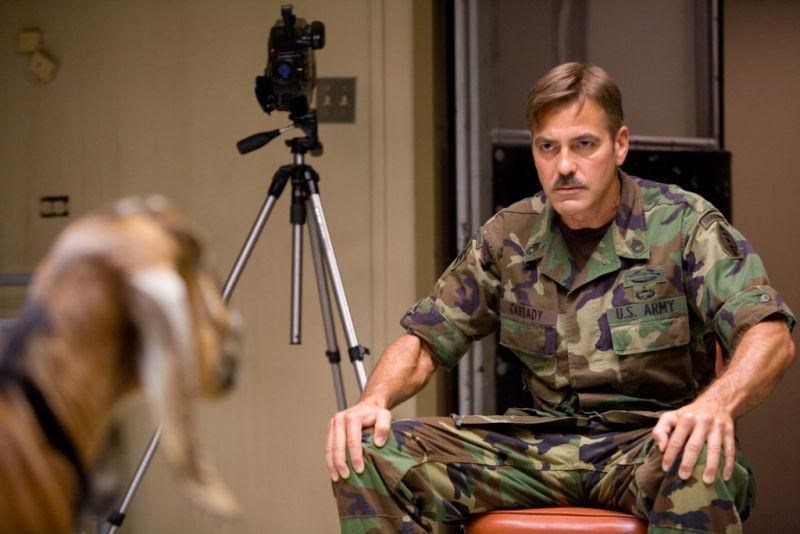 Bob Wilton (Ewan McGregor) is a small-time reporter from a small-town, trying to make his mark.

He can’t even impress people with an interview with a former soldier who claims to have been part of a secret programme to train troops to defeat the Russians using psychic powers.

So unimpressed, in fact, is his wife, that she leaves him for his editor.

Determined to win her back, he takes himself out to Iraq, in the hope of getting the scoop of a lifetime, but rather than reporting the war as he expects, he stumbles across another veteran, Lyn Cassady (George Clooney), whose name came up in his earlier interview about psychic spies.

Cassady takes a doodle in Wilton’s notebook as a sign that he’s meant to take him under his wing and the two men set off on an odyssey across the Iraqi desert.

On this road-trip with a difference, Cassady explains how he was taught everything he knows by Lieutenant Colonel Bill Django (Jeff Bridges) – an ageing hippy who led the Army’s First Earth Battalion – and shows off some of the skills that were meant to make the soldiers blend in with the world around them, to the extent that they could win wars without weapons.

Cassady demonstrates such tricks as making clouds disappear and – as the title suggests – killing goats by staring at them really really hard.

Along the way, they get kidnapped by militants and find themselves caught up in psychic operations research compound, run by another former comrade, Larry Hooper (Kevin Spacey).

This is mind-blowing stuff for Wilton, who – without the psychic powers of his interviewees – could never have imagined what story he’d have returned home with.

Based on a non-fiction (really?) book by the satirical campaigning journalist Jon Ronson, this film begins with a boast that more of it is based on real life events than you might think.

The problem is that much as we are meant to believe that these crackpot veterans are blessed with psychic skills that could challenge the most powerful military weapons, there’s not really much of a sense that they are.

We hear them talk about being able to rearrange the atoms in their body to enable them to walk through walls, but can they? So a cloud disappears and a goat drops dead. And Cassady correctly guesses what’s in a sealed envelope. But there’s nothing here that Derren Brown couldn’t do, and he’s the first to tell us that he’s not using psychic powers.

So if the characters in the film aren’t really psychic, is it a scam or are they deluded? Whatever you think will colour your enjoyment and understanding of the film. But without the belief that there’s anything paranormal going on, the film becomes more of a crack-pot comedy. But while Bridges and Clooney certainly inhabit quirky characters and are unquestionably entertaining, they don’t really convince. McGregor represents the viewer as we go on a journey with

It’s a bit of a mess really, in terms of unfocused characters, unnecessarily fractured timeline and a complicated plot that doesn’t really go anywhere. It’s not really clear who’s doing what and why we should even care.

It’s quite possible that you could get more emotional satisfaction from staring at goats than from watching this.

This is a disappointing waste of a talented cast and Ronson’s fascinating source material.