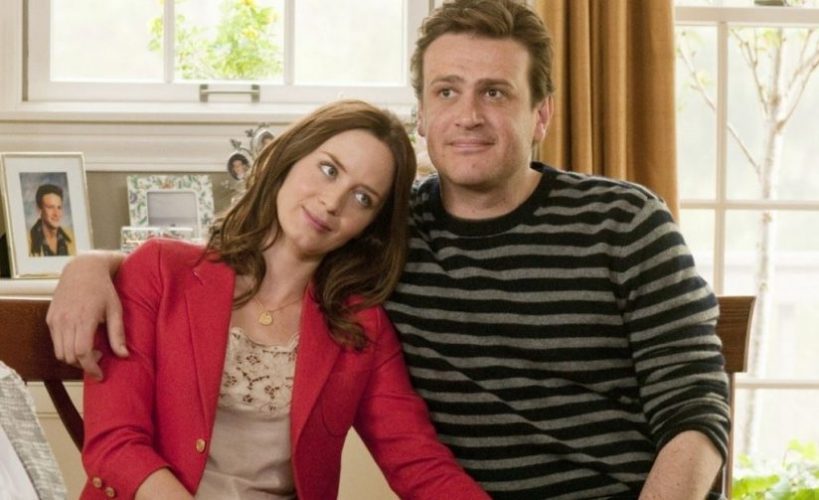 But soon after they share their happy news, Violet get’s a job at the University of Michigan. Supportive to the last, a smiling Tom agrees to put the wedding on hold and move to the icy climes of the north east to help the love of his life achieve her professional dream – even if it means giving up his own expectations of running a smart restaurant and instead, serving in a sandwich bar.

As the years go by, Tom’s ambitions crumble further as he really lets himself go, while things keep getting more interesting for Violet; she gets her contract extended and her professor (Rhys Ifans) starts taking a less professional interest in the newest member of his department.

And as the years go by, their friends and family – and the couple themselves – begin to wonder whether they’ll ever get married at all.

This is marketed as being from the producer of Bridesmaids, but anyone who knows anything about films would find it more useful to know it’s from the director (Nicholas Stoller), writer and star (Jason Segel) of Forgetting Sarah Marshall.

It’s certainly more of a romantic comedy than a gross-out farce.

But given its prominence, it feels unexpectedly flat.

From the title and, indeed, the trailer, you might expect it to be a film about how, over a period of five years, an hilarious string of obstacles keep getting thrust in the way of this loving couple as they desperately want to tie the knot – but in fact, there’s really only one thing getting in the way: Violet’s job (and perhaps something else that arises out of it).

But more than this, there’s not really any explanation of why getting a job in another state means they can’t get married anyway. Even if Michigan did not allow heterosexual marriage, they could have flown home to San Francisco for the weekend – I understand they’re quite relaxed about marriage there.

Rather than being the film that’s suggested, it’s essentially any old film about any old couple who have issues in their relationship that they work hard to try to overcome.

The answers on all three counts are “not really.”

Moving city doesn’t mean you have to postpone your wedding for five years. Being a great chef in a great city doesn’t mean no restaurants in a smaller city will want you. Respected psychology departments at leading universities wouldn’t waste money on having their entire staff studying stale doughnuts – this is purely a plot device which is supposed to make the main story seem more profound, but has the opposite effect.

And for a couple considering building a future together, whose career would they prioritise? The successful chef with the potential to run an exclusive San Francisco restaurant or a psychology post-grad?

There are too many cliches – the crazy colleague, the soppy sister, the bonkers boss.

No-one seems to do anything that feels right for their character and everything is just too convenient – everyone is where they need to be for a particular plot event.

It’s clumsy, corny and worst of all, it’s just not funny enough. There are moments of humour, but largely in the throwaway remarks about Tom and Violet’s cultural differences but jumping on a pile of snow and landing on a fire hydrant doesn’t match the incisive wit of their previous collaboration.

There are moments, when the plot trundles along, that you feel like you’re watching a five-year movie – this genre has no right extending past the two hour mark – unless it has something really special to offer, which this doesn’t.

It would be churlish to suggest that there is no enjoyment to be had at all – it has its entertaining moments and it would be fine for a trans-atlantic flight or a winter’s Sunday afternoon in front of the TV, but has little of the wit, charm or humour you’d expect from the “producer of Bridesmaids” or the “writer, director and star of Forgetting Sarah Marshall.”