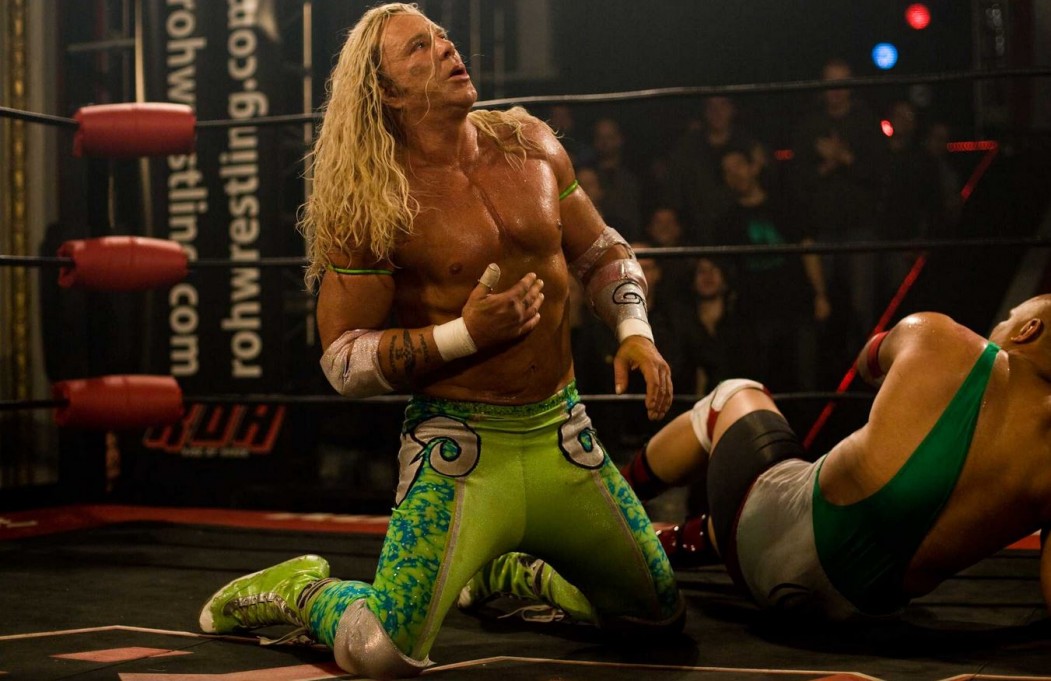 Randy “the Ram” (Mickey Rourke) was one of the most popular and most successful wrestlers of the 1980s. But it’s not the 1980s anymore.
Two decades past his prime and he’s still gracing – rather than massive arenas – school halls.
With nothing else in his broken life, his work is all he has. But it doesn’t pay enough even to cover the rent of his caravan, so he spends most of his time sleeping in his car.
When – after one of his many brutally bloody bouts – he collapses, he’s diagnosed with a heart condition and told never to wrestle again.
Randy has no choice but to try a new life and ends up back in an old job, at the deli counter of the local supermarket.
Accepting his mortality for the first time, he discovers loneliness and guilt and sets out to confront his woeful situation.
He falls in love with a local lap-dancer, Cassidy (Marisa Tomei), and tries to reconnect with the estranged daughter (Evan Rachel Wood) he let down, many years earlier.
But when his attempts to resurrect some form of a satisfactory life from the physical and emotional pain of his past fall by the wayside – as they invariably – he returns to the only thing that makes him feel comfortable – the one thing that doesn’t break his heart (well, physically, but not emotionally) – the wrestling ring.

The first thing to point out is that this – as the title suggests – is not a film about wrestling, but about a wrestler. So, while the first half of the film features many violent bouts, with razors and staples being used to cause as much pain to other wrestlers as possible, if this doesn’t sound like your type of film, it’s worth squinting through these scenes to get to the drama.
Because at its heart, this is a sensitive story of love – lost and found, reconnection with the past and self-discovery for a better future.
The film works on so many levels – with the wrestling, in a sense, acting as a metaphor for the Ram’s failed personal life, and in another sense, providing him with a safety blanket to fall back on – the only place he can be himself – with the only people who really accept him.
The film thrives on remarkable performances – not least the supporting actresses, Marisa Tomei as the love interest and Evan Rachel Wood as the daughter, ignored by The Ram as he was building his career in the ring.
But this is Mickey Rourke’s film. His outstanding, complex and natural performance is utterly believable – almost certainly because he was able to draw on many of his own experiences of – and I wouldn’t say this to his face, especially after seeing this film – being a has-been and a loser, reassessing his own life and ending up back where he started, having to confront all the issues which drove him away in the first place.
In this sense, he was born to play this role – or at least this role must have been written for him. Some reports suggest he was the third choice for the role – others that the Darren Aronofsky rejected the attempts of the financiers to force bigger names on him and took a cut in his budget as a result. The second – more romantic – suggestion is far more in keeping with the feel of the film.
This does for wrestling what Rocky and Raging Bull did for boxing. For Aronofsky, it’s a return to form after the pretentious The Fountain and for Rourke, arguably it’s a return from two decades of obscurity. The only question is, where can he go from here?
Rourke has already picked up the Golden Globe and more awards are sure to follow.